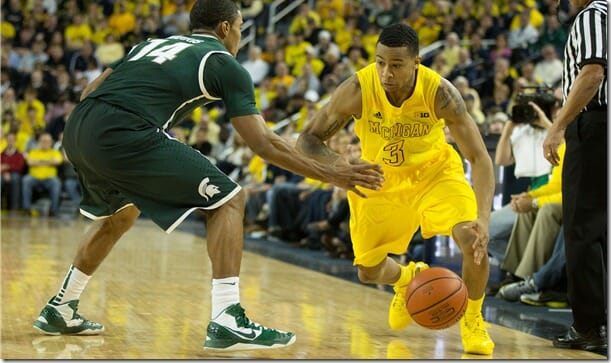 Michigan’s star point guard continued his downright legendary season over the past two games, wins over Michigan State at home and Purdue on the road. His averages over those two games: 23.5 points, 7.5 assists, 4 steals and 1.5 turnovers. And these numbers, transcendent though they are, don’t include the fact that he sealed the crucial win over the Spartans with a miraculous steal and dunk against Keith Appling, or that he single-handedly brought Michigan back from down 12 on the road in the second half in front of a raucous Purdue crowd. Burke finally gets his long-overdue 10, and it’s richly deserved.

Hardaway had a really tough game against Michigan State, scoring just six points and missing all three of his 3-point attempts. While the junior would certainly like a few shots back against Purdue — mainly the ones around the basket — he still managed a much better stat line: 16 points and five rebounds isn’t amazing, but it’s nothing to sneeze at. Hardaway’s 3-point shooting was also slightly better — his 3-for-7 performance against Purdue was the first time he’s cracked 40 percent for a game since playing at Wisconsin on February 9th.

After suffering an elbow to the face from Branden Dawson that required four stitches, Stauskas bounced back nicely against Purdue. The freshman was aggressive going to the basket and knocked down a few midrange jumpers along with his two 3-pointers (on just four attempts) to rack up 17 points. Stauskas being more than just a perimeter threat and involved in the screen-and-roll opens up so many opportunities for Michigan’s offense it’s tough to imagine the coaching staff going away from it.

After Nik Stauskas went down early in the game against Michigan State, Michigan needed someone to fill in — and Caris LeVert stepped up to the plate in a big way. The freshman took a lot of shots — 11 of them, in fact — but he was aggressive and never allowed his defender to get comfortable, scoring eight points and stealing the ball twice in one of his better games of the season on both ends of the court. Against Purdue, he didn’t do much logging just one third as many minutes as he saw against the Spartans.

McGary had a pretty good offensive game during the 21 minutes he played against Michigan State, scoring 11 points on 3-of-5 shooting. But, um, what’s going on with McGary’s defensive rebounding? The 6-foot-10 freshman has one or fewer defensive rebound in each of Michigan’s past five games. While his offensive rebounding numbers continue to be staggering (8th in the country according to kenpom), McGary needs to pick it up on the other end.

Morgan didn’t have quite the offensive production he had last week, but the redshirt junior notched one of his better defensive performances of the year against Michigan State, matched up with the Spartans’ exceptional post man Derrick Nix. Against this elephantine mass of humanity, Morgan held his ground and anticipated where Nix wanted to go expertly. Against Purdue, Morgan missed his only field goal attempt and was less effective.

After a solid performance against Michigan State that saw Robinson take some key charges as well as score eight points on 4-of-6 shooting, the freshman struggled against Purdue. Robinson shot just 2-of-7 from the field and missed an astounding amount of easy layups. Robinson is usually very sound around the basket, so that performance can be chalked up as a fluke.

Albrecht didn’t do much against Michigan State besides draw a key foul on Keith Appling, but the freshman was effective against Purdue; in increased playing time, Albrecht made his only shot and also logged a steal and an assist.

Horford is simply not making the sort of progress many Michigan fans expected of him this year once he got healthy. Minutes are tough to come by at times for the big men — Horford played just four minutes in each of Michigan’s past two contests.

Bielfeldt didn’t play against Michigan State and missed his only shot against Purdue in three minutes of game action.