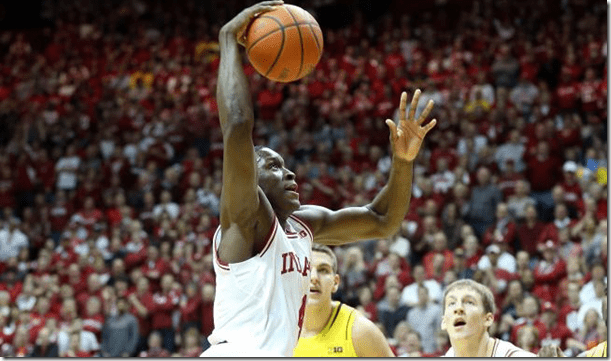 Just over a month ago Michigan traveled to Bloomington with a 20-1 record and the No. 1 ranking before suffering an eight point loss to Indiana. The ups and downs since February 2nd have covered the full emotional spectrum but somehow after it all, Sunday’s season finale at the Crisler Center will have the Big Ten Championship implications that many imagined in August when the conference schedule was announced.

In spite of heartbreak in Madison and embarrassment at State College, Michigan has everything to play for on the final day of the regular season. Neither the Wolverines nor Hoosiers enter Sunday afternoon playing their best basketball of the season. Indiana has lost two of its three games while Michigan’s defensive fortitude has been questioned for the majority of the last month. But the importance of Sunday’s game can’t be overstated with the Big Ten Championship, Big Ten and NCAA tournament seeding, and potentially National Player of the Year honors all hinging on the outcome.

After 30 games, there’s little question that Indiana has the best offense in the country. The Hoosiers can play fast or slow; leaning on Cody Zeller inside, Victor Oladipo slashing to the basket and an array of shooters, most notably Jordan Hulls (48% 3pt) and Christian Watford (48% 3pt). Stopping Indiana is a challenge and even after a month of harping on Michigan’s defensive woes, only one team has scored the ball more effectively against the Wolverines than Indiana’s 1.17 points per trip in early February.

Indiana is the best shooting team in the Big Ten, with a 53% effective field goal percentage, and is productive inside (49% 2p, 2nd B1G) and outside (42% 3p, 1st B1G). What differentiates the Hoosier offense from Michigan’s talented outfit is the ability to get to the free throw line. Cody Zeller (2), Christian Watford (5) and Victor Oladipo (10) all rank in the conference’s top ten in free throw rate and the Hoosiers attempt a Big Ten best 48.6 free throws per 100 conference field goal attempts. Given Indiana’s ability to get to the line (3rd nationally) and Michigan’s ability to prevent free throws (2nd nationally), something is bound to give in the free throw department.

Indiana has rebounded 37% of its missed shots in Big Ten play, a figure only bested by Minnesota’s athletic front line. The lone weakness of the Indiana offense is turnovers. Indiana has turned the ball over on 19% of its Big Ten possessions and gave the ball away often in the first meeting, a critical reason that Michigan was able to crawl back into the game in Assembly Hall. Michigan’s proficiency at converting turnovers into points can’t be underrated and will be important in a game where stops will be tough to come by.

Indiana’s offense draws all of the headlines but its defense is far from a weakness. The Hoosier defense ranks fifth in the Big Ten, allowing .98 points per league possession. Indiana is average at defending twos, 45% 2-point allowed (5th B1G), and better at defending threes both in accuracy and quantity (29% allowed, 30% 3PA/FGA, both 2nd in the conference). The Hoosiers force turnovers on one-in-five Big Ten possessions and manage to do so while avoiding fouling.  The Achilles’ heel of the Indiana defense is defensive rebounding. Big Ten opponents have rebounded 35% of their misses, the third worst in the conference. Michigan notably toned back its offensive rebounding approach in recent games, and it’s unlikely that changes against Indiana given the Hoosiers devastating transition offensive attack. However, Jordan Morgan and Mitch McGary both could have an opportunity to grab a few extra possessions for the Wolverines against an Indiana team that has allowed opponents to rebound greater than 30% of their misses in seven of its last eight games.

Beyond the team profiles, there are some very difficult individual match-ups for John Beilein to manage in this game. Victor Oladipo, Christian Watford and Cody Zeller all possess a great combination of not just size and athleticism but skill as well. Jordan Hulls is fairly one dimension but he demands full attention anywhere on the floor. The good news is that Jordan Morgan wasn’t close to healthy in the first game and his health should provide a massive boost for Michigan’s interior defense.

Glenn Robinson III was not only overwhelmed by Christian Watford in the first meeting, backup freshman Jeremy Hollowell also got the best of him. Watford’s size and skills makes him a difficult guard and you have to wonder if John Beilein experiments with some two big looks that we saw against Michigan State. His lineup flexibility will be dictated by whether Michigan’s big men can avoid foul trouble. Obviously, you can’t help off of Hulls but Michigan was also unable to exploit his lack of size or quickness on the defensive end in the first meeting. Nik Stauskas was just 3-of-10 in that game despite the shorter Hulls guarding him throughout. Michigan will need much stronger games from both of its freshmen to beat the Hoosiers the second time around.

Ferrell is likely to guard Burke, and he’s good enough to make Burke work for his offense. That leaves Victor Oladipo on Hardaway but Michigan’s greater concern is who can defend Oladipo. Terone Johnson exploited Michigan’s inability to keep strong and quick guards out of the lane and Oladipo should pose a similar but more potent threat in the half court.

Speaking of Ferrell, he’s perhaps the most underrated defender in the Big Ten. Here’s a look at the Synergy Sports individual defense numbers among the top five Big Ten defenders on a per-possession basis:

Ferrell trails Morgan, but he’s been challenged quite a bit and opponents simply haven’t scored efficiently against the 6-foot freshman. Measuring individual defense is a precarious topic but few would disagree with Scott or Berggren’s defensive production while recent results have proven just how important Jordan Morgan is to Michigan’s interior defense. Despite Ferrell’s defensive abilities, he’s the weakest link in an Indiana offense that’s filled with some of the most efficient players in the country.

Cody Zeller sometimes doesn’t get as involved in the half court as he should but you simply have to keep him out of the transition game. Zeller scores 1.53 points per transition possession, third best in the Big Ten. Jordan Morgan’s discipline defensively was great against Derrick Nix but Zeller will provide an entirely different challenge for Michigan’s experienced big man.

Before the first match-up I pointed out that Indiana’s pick and roll defense was great at defending the roll man but struggled to stop ball handlers from scoring. Michigan ran a lot of ball screens in that game and got off to an awful start, missing or turning the ball over on seven of its first eight pick and roll possessions. Indiana still surrenders .86 points per possession to pick-and-roll ball handlers, 13th percentile nationally, and Michigan still has the Big Ten’s best ball screen scorer in Trey Burke. The pick-and-roll is a chess match and subtle adjustments can make all of the difference but Michigan’s ball screen production should serve as an early barometer for the Wolverines success.

Ken Pomeroy projects an Indiana win, with a final score of 75-73, giving the Wolverines a 44% chance of walking out of the Crisler Center with a share of the Big Ten title.

This & That: Michigan expects to host a majority of its priority class of 2014 recruiting targets. Big Ten Tournament seeding scenarios are broken out here. Michigan could be a 2 or 3-seed with a win but is likely to be a five seed with a loss. Trey Burke was named one of 15 finalists for the John Wooden National Player of the Year Award. A Michigan win would give the Wolverines their first undefeated home record since 1976-77. This will be the sixth Michigan game which pairs two teams ranked in the top ten this season. Pat Forde profiles Victor Oladipo’s complicated relationship with his father.