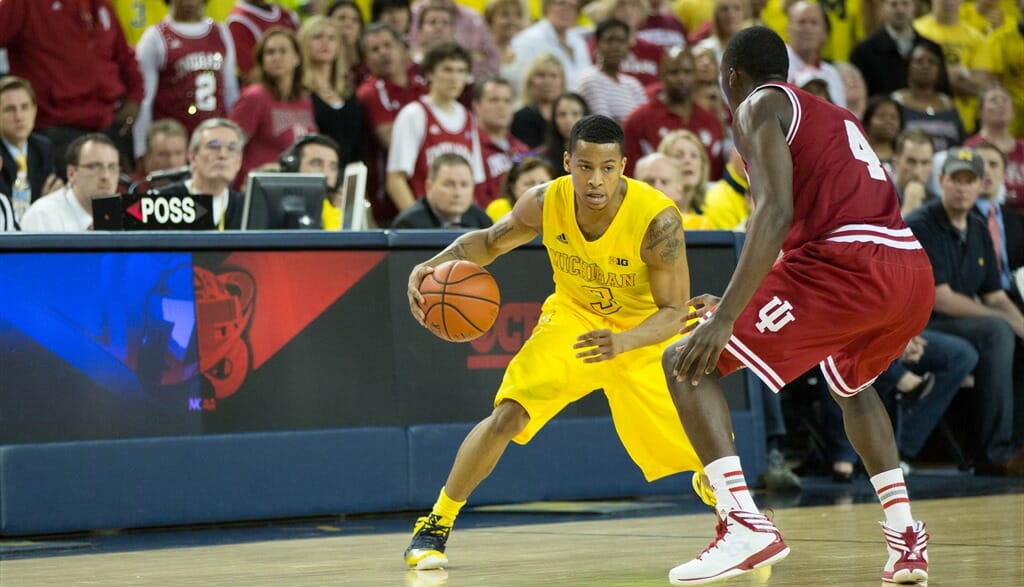 Michigan’s performance against Indiana felt like a microcosm of its Big Ten season. The game was filled with the highs and lows, jubilation and frustration that have defined its season but in the end the Wolverines lacked the consistency to walk away on top.

In front of a boisterous Crisler Center crowd, there were times when Michigan was dominant. The Wolverines rebounded from a slow start with a 24-6 first half run filled with the transition offense and easy baskets that they’ve feasted on all season. Then there was the 14-6 run that Trey Burke spearheaded late in the second half. That run gave Michigan a five point lead with under a minute to play and felt like a potential storybook ending to what was all but assuredly Burke’s final game game in Ann Arbor.

But Michigan’s inconsistency reared its ugly head in the game’s closing moments. The Wolverines made just 6-of-13 free throws for the game including three critical misses in the game’s final minute – two of which were the front end of one-and-ones – and allowed Indiana to escape with a one point victory.

John Beilein emphasized that Michigan’s shortcomings in the first 39 minutes – most notably, allowing Indiana to rebound a staggering 24 of its 42 missed shots – were what cost his team the game. While he’s certainly correct that a couple more box outs could have helped, it’s impossible to ignore the finality of Michigan’s final possession.

After 1153 offensive possessions of Big Ten basketball, Michigan’s title hopes came down to the final bounce of the ball. Michigan executed its late game play effectively as Burke used a high screen from Jordan Morgan, darted into the lane and fired up a layup over Cody Zeller. But Burke’s shot would miss and Morgan’s tip would suffer a similar fate after resting tantalizingly on the edge of the rim.

Michigan held Indiana to just six points from the 16:05 mark to the 4:30 mark of the first half but other than that stretch defensive stops were tough to come by. Indiana’s offense rode a dominant offensive rebounding performance to 1.33 points per possession in the second half and 1.11 points per trip for the game. The Hoosiers rebounded 57% of their misses for the game and scored 17 second chance points. Despite being unable to finish the job with clean defensive rebounds, Michigan still did some things well defensively. The Wolverines forced the Hoosiers to turn the ball over on 22% of their possessions, making just 42% of their twos, and attempt just nine free throws to 70 field goal attempts. How bad was Michigan’s defensive rebounding? This was the first time in the KenPom era (2003+) that the Wolverines allowed an opponent to rebound 57% of their misses.

Michigan’s offense was able to hang in against Indiana by valuing the basketball and hitting some critical three point shots. The Wolverines 1.10 points per trip for the game wasn’t great but for the most part they matched the Hoosiers offensive firepower in the second half, scoring 1.20 points per second half possession. That second half efficiency was enabled by hot three point shooting (7-of-12, 58%) and not recording a single turnover in the final 20 minutes. Michigan outshot Indiana, got to the free throw line more often and turned the ball over less but simply wasn’t able to score on its final possession.

Michigan opens the Big Ten Tournament against Penn State and would play Wisconsin in the quarterfinals if it advances. With a potential rematch against Indiana laying in the semifinals, it’s safe to say that the Wolverines will have revenge on their mind in Chicago, holding just a 1-4 record against their potential first three opponents.