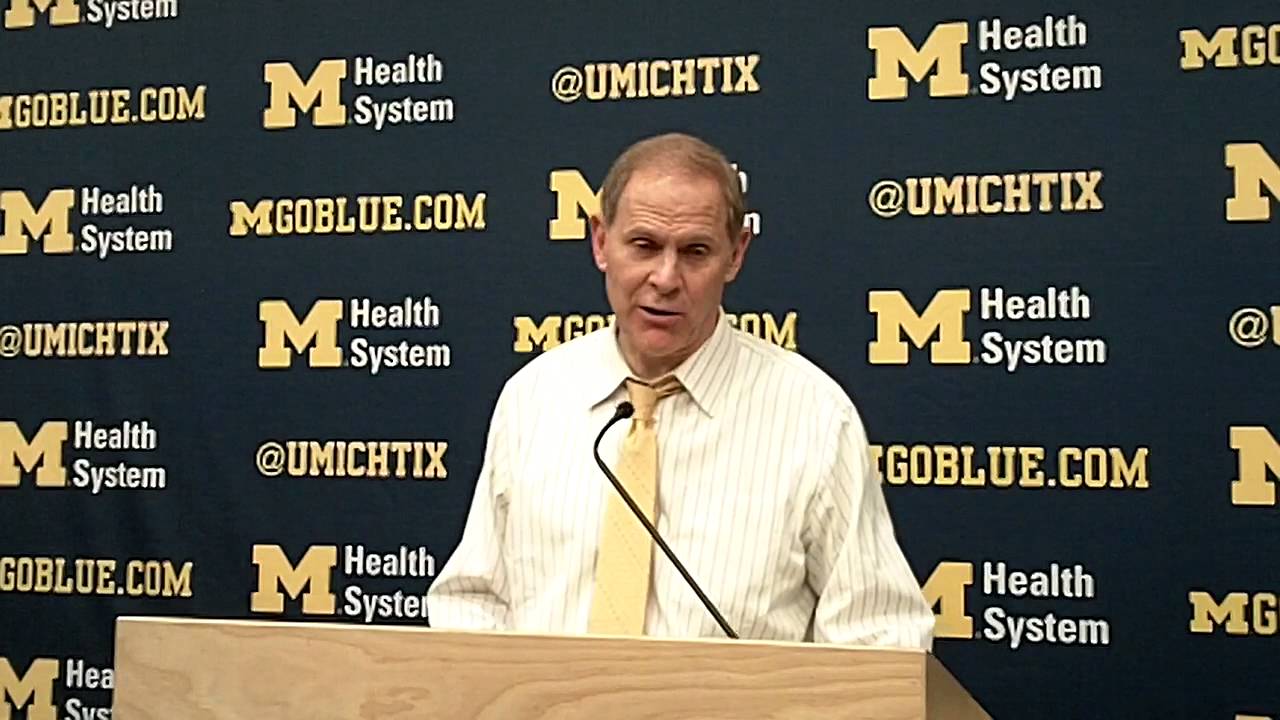 John Beilein faced the media after Michigan lost a share of the Big Ten Championship on its home court Sunday. Watch the quotes press conference in the embedded media player below or find selected quotes after the jump.


“It was a great basketball game. Our kids played their hearts out. I thought we defended them very well at times, most of the time but just let them crash three or four guys and somebody always seemed to be missing someone so the rebounding was a huge part of this game. It’s a shame when we defend so well and they just walk in and get a layup. It happened over and over. As a coaching staff and as a team we’ve gotta find a way to get better in that area. You get what you earn and we didn’t quite earn this one today.”

On the final play: “We practice that quite often. It’s just called 1-2-3. You’re trying to get a screen right down the middle of the floor, take it to the basket and just play ball. The man that sets the screen is going to follow for a rebound. We got a really good look by Trey and then Jordan the tip in and I thought for sure that baby was going in. But it didn’t work out and they get the win – and the championship.”

On free throws: “It’s not blown on the free throws. It’s not. You lose a game like that and you lost it back possession by possession back in the game. We had two guys at the line that have won so many games at the foul line. That did not cause the loss. I’d never put it on those two guys for sure. We did other things in the game that we have to be better at . That falls on the coach.”

On rebounds: “Part of the rebounds come off of penetration when two guys have to help the ball. So if there are two guys then somebody is going to be open. It takes time and sometimes you can’t even do it. But there’s other times that the ball is up and we’re ball staring. We as coaches have to do it, you can put it right on me. We put the bubbles on – I watch every practice and check out who blocks out every time and we block out every time in practice – we did not today.”

On foul trouble against Zeller: “It was [frustrating]. Sometimes it is just a matter of our guys with the right technique. But early fouls for putting two hands on his back. These are issues that I as a coach have to do a better job of. I will say it’s emphasized very hard in practice but they are just habits [we have to break].”

On the tournaments coming up: “We told the team ‘I’d hate to have that be a situation where it’s the end of your season’. We have some time, if we’re in that fifth place game we are playing again right away on Thursday. We have to get quick rest and turnaround and try to find some good out of this particular loss. Obviously it would be special to win the Big Ten Tournament but then you’ve gotta go back and grandaddy of them all starts.”

On Spike Albrecht: “We thought Trey was getting worn down and they were taking us out of a lot things. [Spike] gets us into things. He can drive down hill and prioritize passing. I wanted to get Trey these little rests in the game to make sure he had more time. It’s not a great match-up on the other end but we needed to score points because we weren’t stopping them. He’s a tough little guy he’s getting better every day. “