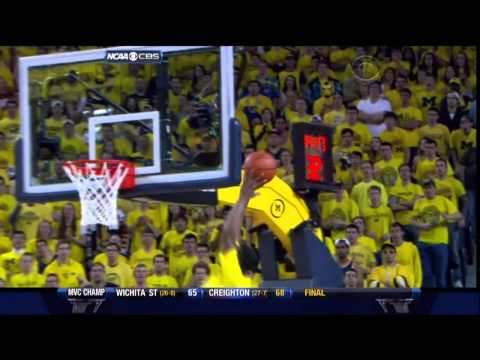 This game, one of the most heart-breaking on record for Michigan fans, was a fight that came down to the wire — but it didn’t always look as though it would turn out that way. Indiana walked into the Crisler Center took the Wolverines by storm, jumping out to a 10-3 lead within the first four minutes. A couple 3-pointers from Jordan Hulls and some inside buckets immediately set Michigan back on its heels, but the Wolverines responded with a run of their own after the first TV timeout. Doug Gottlieb made the argument at halftime that Michigan’s 12-0 run in the first half was the result of key substitutions by Tom Crean — Christian Watford, Yogi Ferrell and Victor Oladipo left the game at various times — it was due in a much larger part to Michigan’s defense and subsequent ability to get out on the fast break. This, of course, has been a common theme for Michigan all season: great defense leads to its best offense. In the first two plays of the above sequence, we see Tim Hardaway Jr. make an excellent block on Victor Oladipo that caroms off the backboard and leads to a run-out, with Jordan Morgan finishing. Then, off of a Hoosier miss, Trey Burke lobs the ball to Glenn Robinson III, who finishes at the rim. The coolest play, however, and one clearly orchestrated to play off Indiana’s tendency to cheat on ball screens, is Nik Stauskas’s first 3-pointer. Mitch McGary sets a ball screen for Stauskas, which Hulls predictably jumps, anticipating Stauskas to dribble to his right. Instead, Stauskas shifts slightly to his left and Hulls gets picked by McGary coming back, resulting in an open 3-pointer. His second shot from long range comes when Indiana’s defense collapses inside and Hardaway finds him open in the corner. Finally, we see Stauskas take advantage of the shorter Hulls in the open court, taking him off the dribble for a contested leaner. By the end of this run, Michigan not only found itself back in the game, but with a 15-10 lead.

With about nine minutes left in the second half, Indiana’s offense was beginning to create some distance from Michigan. During their five offensive possessions from 9:28-6:54 in the second frame, the Hoosiers scored 11 points, which would have been a positively devastating offensive stretch — if Michigan hadn’t been able to answer with two huge 3-pointers to keep the Indiana run at bay. The first long-range bomb came from a source that seemed as unlikely to Indiana as the fans at the Crisler Center: second-string freshman point guard Spike Albrecht. Albrecht has a tendency to make impactful plays, but the two in this clip would challenge his play in Columbus for his best of the season. The beginning of the first play shows exactly how much — or how little — respect Indiana was giving Albrecht as an offensive threat. Yogi Ferrell turns his back completely on Albrecht as soon as Trey Burke beings the ball inside the 3-point line. Burke takes it inside and dishes to the freshman for the open three and he nails it. In the second play, the roles are reversed — but someone forgets to tell Remy Abell. Abell is matched up with Burke, Michigan’s most dangerous offensive weapon, but when Albrecht drives the lane, Abell reacts to the play as if he was guarding Albrecht and Burke was the one going to the rim, leaving Burke in favor of helping on Albrecht’s drive. Albrecht returns the favor to Burke, who holds up his end of the deal. After the play, you can see nearly every Hoosier looking incredulously at Abell, who clearly should have stayed home.

3) Trey Burke, Jordan Morgan and Tim Hardaway Jr. come up with big buckets down the stretch

After a deflating lay-in by Victor Oladipo off a well-defended inbounds play, Indiana was up two and Michigan was searching for a way to regain control of the game in the waning minutes. What they got was a stretch of offense that seemed, at that moment, to all but seal the game. As usual, Trey Burke was the first answer. With just over two minutes left and the game in the balance, the sophomore withstands uncharacteristically excellent defense by Jordan Hulls to put up a floater in the lane that somehow finds the bottom of the net. On the second play, we see Jordan Morgan in a familiar position: the only Michigan player within 20 feet of the basket when a shot goes up. Morgan was consistently left alone down low to contend with the likes of Oladipo, Cody Zeller and Christian Watford for missed shots and he performed admirably in this one with 8 rebounds — six of them offensive. Morgan slides into the paint, grabs the rebound clean over Hulls’ head and lays the ball in over the outstretched arms of Zeller and Watford to give Michigan a two-point lead. Finally we see Tim Hardaway Jr. come up big, taking the ball to the rim and laying it in over Zeller and Will Sheehey. Michigan held a commanding four-point lead after these three shots and looked to be readying the Crisler crowd for a second straight share of the Big Ten title, but it wasn’t in the cards. You know what happened next, but we’ll show you anyway.

No one played bigger for Indiana than Cody Zeller. The sophomore finished with 25 points and 10 rebounds and led the Hoosiers down the stretch to the win. None of his points were more meaningful than the bunch he scored in the final minute of play in Ann Arbor. With Michigan nursing a five-point lead after a free throw by Glenn Robinson III, Zeller took the ball right at Jordan Morgan, who was hampered somewhat defensively in the final stretch of the game due to foul trouble. This play shows Zeller’s go-to move: lean into the defender, and finish strong. In this case, Zeller finishes on the offensive rebound, a problem the Wolverines had all night; Indiana rebounded a stunning 57 percent of its offensive rebounds during the game. After making two free throws when he gets fouled after receiving the ball in the post, Zeller gets an off-ball screen from Jordan Hulls. Morgan gets caught in the screen and Yogi Ferrell gets Zeller the ball virtually unguarded on the block. With Morgan behind him and Tim Hardaway Jr. flying in front of him Zeller, slides in between them both for the lay-in, giving Indiana a decisive one-point lead. Michigan simply could not stop Zeller in the post, and the Indiana big man showed why he is among the very best players in the country on Sunday.

I’ll go ahead and play spoiler: no matter how many times you watch the above video, the ball never rolls through the hoop. Michigan never ends up celebrating a victory on a last-second tip-in by Jordan Morgan, though for what felt like an eternity it seemed as though that was exactly what the Wolverines would be doing. Michigan runs its set well on this play: Morgan sets a high ball screen for Trey Burke and ends up following his point guard to the basket. Oladipo gets caught in the screen and Burke makes his way around the helping Zeller. Burke almost scores on an acrobatic lay-in, but finds back rim. Morgan, however, is trailing, and gets his left hand on the ball. But it’s JUST too strong, and the put-back attempt rims out. Not to pile on, but I couldn’t help but think of this near-game-winner when I saw Morgan’s shot roll out.  Of course, Michigan probably should not have found itself in a situation to need a game-winning shot to begin with. The Wolverines were up by five with under a minute left but missed two crucial free throws down the stretch, both front ends of one-and-ones and both missed by two of Michigan’s best free-throw shooters in Tim Hardaway Jr. and Burke. If Michigan makes its free throws, in all likelihood  we’re talking about a much different outcome.