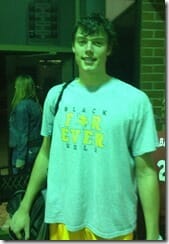 Michigan added a class of 2014 commitment today as Ricky Doyle accepted a Wolverine offer. Doyle visited Michigan for the first time this weekend for Michigan’s game against Indiana, it was his first visit outside the state of Florida. Doyle confirmed the commitment to UM Hoops earlier afternoon.

Doyle is Michigan’s first official commitment in the class of 2014 although Austin Hatch, formerly a 2013 recruit, reclassified to the class of 2014. Hatch has yet to return to live basketball action since he was involved in a tragic plane crash in June, 2011.

Doyle missed nearly two months of playing time during his junior year but finished the season with per game averages of 22 points and seven rebounds while helping Bishop Verot to a 17-12 record.

Scouting notes, video and more after the jump.

Doyle is Michigan’s first commitment in the class of 2014 and the Wolverines now have outstanding scholarship offers to 5-star Devin Booker and 4-star prospects Trevon Bluiett and Vince Edwards. All three prospects were at Michigan’s loss to Indiana along with Doyle. Doyle is a big man that looks like a likely fit at the five position.

An updated version of Michigan’s scholarship chart for future classes lives on this page.

Our Class of 2014 Michigan recruiting board, updated with recent offers, commitments and recruiting profiles, lives here.

Doyle’s back-to-the-basket skills are second to none for a player his age. He is proficient finishing with both hands and has an array of post moves to choose from. He can also catch the ball in the post, face up and score consistently coming across the lane as well as showed on multiple occasions against LaBelle. He took just one shot outside of the paint in Thursday’s game but has showcased a smooth mid-range jump shot in the past that indicates that he is comfortable offensively outside of the paint.

Strengths:
He’s got a history of basketball in the family. His father had a cup of coffee with the Detroit Pistons before playing overseas. He’s receiving good coaching in high school and improved from his freshman to sophomore season. Could be a kid who plays pick and pop to mid-range. Runs well and changes ends with decent touch in the lane. Like that already owns a hook shot and has ways to score in the lane.

Weaknesses:
Not a bad athlete but not an exceptional one either. Still needs to continue to cultivate his interior post moves and work in the weight room to gain a measure of explosion to help versus size.

Bottom Line:
A good student, Doyle is a legit mid-major prospect and because of all the history and improvements, he could wind up at a high level as a second post option.