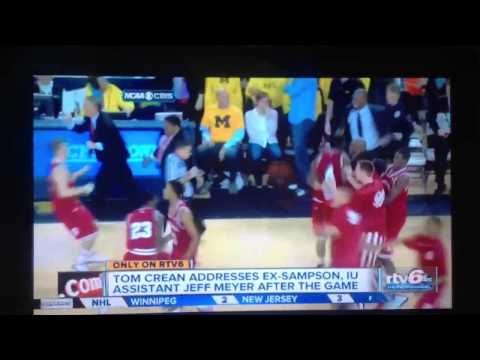 Tom Crean had heated words for Michigan assistant Jeff Meyer after Michigan’s one point loss to Indiana on Sunday afternoon. The video above comes from RTV6 in Indianapolis and shows the heated debate.

Crean stormed into a conversation between Meyer and Indiana assistant Tim Buckley screaming “You know what you did! You helped wreck the program!” Crean had to be separated from Meyer as the two made their way off of the court.

On Monday morning’s Big Ten teleconference, Crean reported that he apologized to Meyer after the game.

“A professional misunderstanding I had after the game. On the way to the plane, I talked to him on the telephone,” Crean said. “I apologized.”

John Beilein also addressed the altercation on the league teleconference. Beilein wouldn’t confirm that Crean apologized and said that Meyer responded with poise.

Before his time at Michigan, Meyer was an assistant coach at Indiana under Kelvin Sampson from 2006-2008. It was Sampson’s tenure that left Indiana facing NCAA violations and forced Crean to rebuild the program when he arrived. Meyer was cleared of any major violations by the NCAA in the fallout of Sampson’s violations. The Indy Star re-published a collection of stories from the Indiana NCAA investigation this morning.

Michigan also has a heavy recruiting presence in the state of Indiana. Three current Wolverines are from the Hoosier state and incoming recruit Zak Irvin picked Michigan over Indiana among other schools.

Scout.com’s Brian Snow tweeted that there’s been significant friction between both staffs on the recruiting trail.

There have been unfriendly recruitments between Indiana and Michigan in last year. Major source of issues between staffs. Will leave it at that.