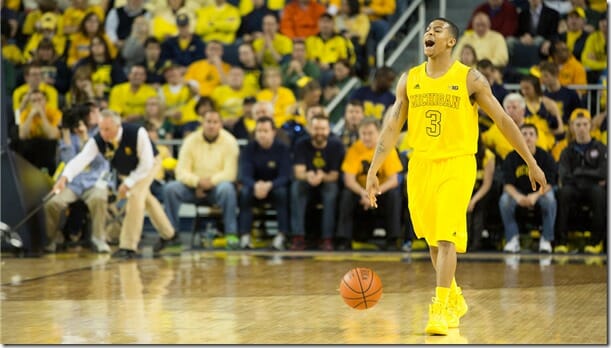 Burke is the first Michigan player to win Big Ten Player of the Year honors since Glen Rice in 1989. Burke led the Big Ten in both scoring and assists with averages of  20.2 points and 6.4 assists in Big Ten games. He was the only player in the conference to score at least 15 points in every league game this season.

Full All-Big Ten teams and additional honors after the jump.

Big Ten Player of the Year could be the first of many prestigious honors for Trey Burke. Michigan’s point guard was also named a first team Sporting News All-American earlier today. If he ends up a unanimous first team All-American he would be just the fifth Wolverine to accomplish that feat, joining Cazzie Russell (1985, 86), Rickey Green (1977), Gary Grant (1988) and Chris Webber (1993).

Burke is also a finalist for the John Wooden and Oscar Robertson Player of the Year awards as well as the Bob Cousy Award for the nation’s best point guard.

(UNANIMOUS SELECTIONS IN ALL CAPS; *Additional honorees due to a tie)