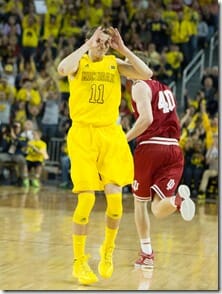 Entering Sunday’s game against Indiana, it appeared that Michigan might have a shot at playing its way back onto the 1-seed line. After the disappointing late game collapse, the Wolverines have fallen back down the totem poll, hovering somewhere around the two and three seed lines.

Indiana appears to have the No. 1 seed in the Indianapolis region locked up but for the rest of the Big Ten it appears that the Big Ten Tournament in Chicago could be decisive when settling seeding on Sunday.

Michigan, Michigan State and Ohio State are all hovering around the 2 and 3-seed lines. The Spartans and Buckeyes are looking at a potential Saturday afternoon quarterfinal match-up while Michigan has a long road ahead to tournament success, opening against Penn State before facing Wisconsin for the chance to play Indiana. With all three teams so close, the team that gets furthest in the Big Ten Tournament could be looking at the most favorable seed or region.

It appears that a 1-seed for the Wolverines is all but out of the question. To stake a legitimate claim at one of the four coveted top spots, Michigan would need to at least win four games in four days in Chicago and then hope for some other top teams to fall down a peg or two. While it’s certainly possible, the odds are long.