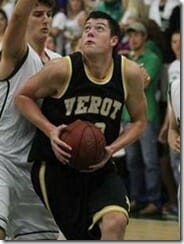 We caught up with Bishop Verot basketball coach Matt Herting, who has coached recent Michigan commit Ricky Doyle throughout Doyle’s high school career. Herting talked about why he feels Michigan is a good fit for Doyle, what he still needs to improve on and more.

What did you say to Ricky when he called you Monday morning and told you he was ready to commit to Michigan?

John Beilein’s done a great job. He’s been down several times and their coaching staff has done a really good job recruiting him. I think the family is real comfortable and I was really comfortable with him. But like I told Ricky, there are pros and cons to looking around. You can continue looking and spend some of your time and maybe confuse yourself, but if you’ve found everything that you’re looking for, why continue to search? If it’s everything you want, and you can’t think of any reason not to go there, then why would you keep looking? He said, ‘this is what I want to do.’ I said, ‘well, if that’s what you want to do and you don’t feel like you need to continue looking, then I think you found a great fit.’

What has been your impression of the work the coaching staff at Michigan did to get Ricky to be a Wolverine?

They did a really good job. Coach Beilein never pressured or implied or gave a timeline or anything like that. I think, after talking with coach Beilein at length, that they really see Rick in college the way coach Miller and I see him in college, which I think is really important because I think understanding what he can and can’t do, what he needs to improve on and what’s going to make him successful, he sees it the same way we do. That’s really important because we’ve seen him play a lot more. A lot of schools, I think, have a sort of system that I don’t think is advantageous to Ricky, where John Beilein’s system is very advantageous to his style of play and what he can and can’t do.

What about Beilein’s system makes it advantageous to Ricky’s style?

What I like about the way John Beilein’s teams have always played is, he has all these well-rounded players, but his system allows guys to do things that they’re good at. It puts guys in positions to succeed, it gets guys in space, guys have the freedom do operate to use their strengths to maximum potential. But there’s enough structure that it’s structured and it’s good solid basketball. If it’s a semi-pickup game, that’s a bad situation for him, but I also think a situation where he’s you know, painting by the numbers isn’t really good for him either. I think Beilein has the perfect mix of letting guys play within his system that really maximizes their strengths.

How do you see Ricky’s game translating to the Big Ten?

I think that’s the best league for him and his style of play. I’m not saying there aren’t other schools that wouldn’t be great for Ricky to go to, but I think the league as a whole is a league best suited for his style of play. Ricky is going to excel in a basketball game a lot more than he’s going to excel in a track meet. He’s a good player and a really good athlete and that sort of stuff, but his greatest strength is that he’s a really good basketball player. That’s why I think a league that’s full of basketball players is a pretty good fit for him.

What have you seen out of his development?

He’s improved immensely but a lot of that is because he’s so young. He’s 16, he’s not even going to be 17 for two more months. I think one thing with that, and with coach Beilein watching him, too, people come in to see him and say, ‘ he needs to improve a little of this and improve a little of that,’ well, yeah. He’s a 6-9-and-change, 72-inch wing spanned 16-year-old. He’s going to have to improve. I think coach Beilein can see the finished product that lies ahead, how good he’s going to be if he continues to work hard. His face-up game’s improved, his post game is becoming incredible. … he has built it from the foundation, the simplest drills on up to now to this great complex post game. His back-to-the-basket game is really, really good. From 8 or 9 feet in it’s really hard to tell if he’s right or left handed. He’s gotten a lot more athletic, he’s gotten a lot stronger, a lot of that’s just going to come from aging.

What does he still need to improve on and how good can he be?

When he came in as a freshman, we sat down, we sit down with him a couple times a year and it’s a systematic improvement: what are some goals, what do you need to work on, what do you need to develop? And we’re not anywhere near through that. He needs to develop a face-up game that’s a lot better. Right now, he’s got a great face-up game one-on-zero, but it’s not a great face-up game 5-on-5. It’s good, but it certainly needs to improve. We need to get in the weight room, improve with weights and plyometrics, keep increasing his vertical, his quickness, his lateral movement in addition to just his sheer mass. We need to improve that. He needs to be a more aggressive rebounder. He’s a great fundamental rebounder, fights out position and all sorts of stuff he’s awesome at but he needs to now start to learning that there’s a time for that and there’s a time for just exploding and going to get the ball. Right now, he gets every rebound that’s his, but he doesn’t get many that aren’t his.

You’re talking about one of the greatest people from just a great family. Rick is a great leader, hard worker, and is probably the most unassuming guy I’ve ever coached. He’s a guy who will do whatever he’s asked as long as he can for as long as he’s asked to do it and never question it or make an excuse, none of those things. And he’s a great kid on campus. A really good person.