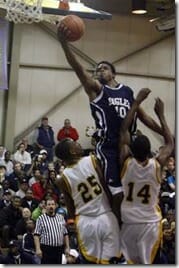 It didn’t take 2013 Michigan signee Derrick Walton long to realize that one phase of his life was coming to a close and another one was about to begin.

2014 Michigan target Edmond Sumner led Detroit Country Day to a 29-6 run in the first 5:30 of the third quarter in Monday night’s Class B Regional Semifinal, defeating Walton and ending his high school career.

Walton was held to just 14 points in front of Michigan coaches John Beilein and Bacari Alexander, and saw Sumner ignite an unstoppable second-half run, helping Country Day pull away for a 75-57 victory.

Holding back tears after the game, Walton reflected on the culmination of high school career.

“It hurts. I thought it would end in a different way than it did,” he said. “(I’ve) evolved a lot, vocally and just by example. The senior year helped me out a lot going on to the next stage of my life.”

Sumner finished with 20 points, and helped contain Walton, who faced an endless array of double teams and exaggerated help-side defense.

“Derrick Walton is such a skilled player that you have to play as hard as you can on him and try to keep him in front of you,” Country Day coach Kurt Keener said, after the game, raving about the Chandler Park senior. “I knew he was going to hit some threes. We weren’t going to stop him. Our defensive quickness just gave him trouble.”

Walton displayed every facet of his game to his future coach in his final high school contest, handing out six assists, and adding five rebounds and four steals.

Turning tenacious defense into quick-strike offense, Walton helped his team cut a 12-point first half deficit down to just two, but his effort and leadership wasn’t enough to extend his senior season.

The finalist for Michigan’s Mr. Basketball said that although the prestigious award has always been in the back of his mind, he would’ve much rather won a state championship for his teammates.

“Overall, a state title was more important than individual awards,” he said. “I would take a state title over Mr. Basketball any day.”

Walton said ending this chapter of his life is bittersweet, but he’s looking forward to moving on to the next phase. The 6-foot point guard won’t waste any time before getting back into the gym for offseason workouts.

“(It) probably (won’t sink in) right now, but in the next couple days, of course (moving on) will be on my mind. I’ll probably take a week or so off, and then right back to it. Just come in as ready as possible and be ready to jump ahead of the rest.”

As he came off the court for the last time in his high school career, the first person to greet him was his father and coach; Derrick Walton Sr. His dad gave him a long hug, and offered one last piece of advice as his coach.

“He just said ‘great job.’” Walton said. “And just (told me to) get ready to take that next step in my life.”

Next up for the Generals is a regional semifinal against Toledo Rogers on Thursday at the University of Toledo (7 p.m.).

Zak Irvin and Hamilton Southeastern lost in sectional play in the Indiana state tournament to a talented North Central squad. Both Irvin and Walton are candidates for the Mr. Basketball award in their respective states.