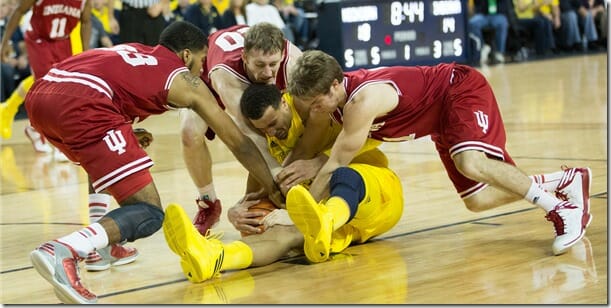 It’s not really ironic or poetic or anything like that — it’s just a tough draw. After losing to Indiana on Sunday, Michigan finds itself not only playing on Thursday in the Big Ten Tournament as the five seed, but also matched up with the lower-tier conference team that gave the Wolverines the most trouble in the regular season: Penn State.

The Nittany Lions played Michigan surprisingly tough at home before the Wolverines traveled to Happy Valley and suffered by far their worst loss of the season after leading Penn State by 15 points in the second half. Now, Michigan has an opportunity to avenge that loss on Thursday.

“Watching Penn State, it’s a whole different team than it was earlier in the season. Over the past six or seven games they have showed that they can beat anyone,” Beilein said during a press conference on Tuesday. “This is a team with seven guys – those seven, they have not been injured, they’ve been playing together, they have great  chemistry right now, and they can beat us or anyone in the tournament right now with the way they’re playing.”

Beilein’s right — Penn State has improved a lot over the latter portion of the Big Ten season. Over the first 11 games of the conference slate, the Nittany Lions went 0-11 with an average margin of defeat of 13.4 points per contest. In its last seven games,  Penn State has gone 2-5 with wins over Michigan and Northwestern. Even their losses look better; excluding an awful performance on the road at Minnesota, the Nittany Lions lost games by an average of just 4.5 points during that stretch.

It looks as though Michigan will once again have its hands full against Penn State to kick off the Big Ten Tournament. One of the major reasons for the team’s improvement, according to Beilein, is that the players have learned to adjust to their changed roles after star point guard Tim Frazier wet down with a season-ending injury late in the offseason.

“(D.J.) Newbill, who’s not a point guard, it took him a while, he was turning the ball over. Now, he is finding the guys that he needs to find and his assist-to-turnover is great,” Beilein said. “Him and (Jermaine) Marshall, they were shooting 28 percent the first time we played them. They shot 50 percent from 3 the last 5 games. So it’s becoming a very good team from all the re-adjustments they had to make after losing Tim Frazier.”

Against Indiana, the rebounding issues hit code red. There were clear issues when it came to boxing out after a missed shot by the Hoosiers. Michigan allowed Indiana to corral a staggering 57 percent of its misses, and this number has often been pointed to as one of the main reasons for the loss on Sunday.

John Beilein shed some light on the predicament the coaching staff finds itself in when it comes to rebounding.

“You would like to have a tremendous, skilled 6-9 rebounder (like) Christian Watford. We haven’t had that, so we say, ‘are we going to play with a 6-8-to-6-9 non-skilled player, or are we going to play smaller?’ and we’ve played smaller,” Beilein said when asked about the rebounding disparity. “As a result, the other day we got out-rebounded badly, but we only had five or six turnovers. It’s a game of possessions. We hate it.”

So it’s clearly a pick-your-poison situation for this Michigan team defensively. However, contrary to the perception that Michigan was only sending one player — Jordan Morgan — to the offensive glass on Sunday, Beilein said they sent Glenn Robinson III along with him, there were simply times when he couldn’t get there.

“We were sending two every time (to the offensive glass). Now, did Glenn always get in there?” Beilein said. “He may have sometimes been in a position where he saw the rebound going out the other way and just went the other way. In that last game, we had three back.”

Preparing for the Big Ten Tournament in Chicago

After being held in Indianapolis for the past five years, the Big Ten Tournament will move back to Chicago this season, where the tournament was first held in 1998. According to John Beilein, this is good news for Michigan.

“In this particular tournament, it being in Chicago, I’m really excited. Indianapolis is so convenient, but we haven’t drawn as well as other teams in Indianapolis,” Beilein said. “I expect, based on our Northwestern crowds, that great Michigan support. That’s going to be important for us.”

However, like every team that is a virtual lock for the NCAA tournament, Beilein and the coaching staff will be wrestling with the dichotomy of playing to win every game while also desiring sufficient rest for their players heading into the Big Dance.

“The more you can win in the tournament gives you confidence. At the same time, you could play four straight games and not win the championship and be playing Thursday somewhere,” Beilein said. “Whatever the plan is, wherever we go in this tournament, we’re just going to make the best of it whatever it is.”