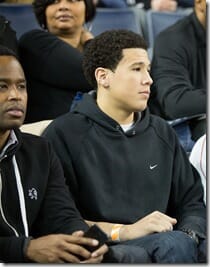 We caught up with five-star class of 2014 recruit Devin Booker on Monday evening to talk about his trip to Michigan on Sunday for the Indiana game. The sought-after swingman recently capped off a whirlwind visit tour which took him from Duke and North Carolina, down to Florida, and back up north to Michigan State and Michigan. The full transcript of the interview is below. (Photo: Dustin Johnston)

Anything that stood out about this visit?
I don’t want to say anything on the court, because I’d seen the Ohio State game last year, and that was almost the same atmosphere. One thing that was different this year was I was with my dad. This was my first time bringing my dad up to Michigan. I’ve been with my mom three or four times, but my dad’s also going to play a big part in my decision, so I wanted him to see it.

What impression did he come away with?
I’m really not sure. We talked a little bit, but not really. I’m sure he was impressed, you know, he saw the facilities and the facilities are all brand-new, and he mentioned he liked that a lot. And then atmosphere, I think everyone enjoyed that.

What was the itinerary for the visit?
I actually came earlier before the game, like two to three hours before the game. And then I had my dad talk to coach Beilein real briefly because I understood he was getting ready for a big game. And then we watched film of my position with coach (Lavall) Jordan in one of the film rooms. He wanted to show my dad how I’d fit in the offense.

Can you go through the visits you’ve been over the past few weeks?
My first visit was to North Carolina and Duke. I did those I think two weekends ago. And then last weekend I went to Florida and then this weekend I went to Michigan State and Michigan. So I’ve been to a lot of schools.

What was it like to visit Duke and North Carolina?
I feel like my hard work is paying off right now. Last year, I felt like I was underrated and I was playing with a chip on my shoulder and now my hard work’s paid off and some of these big schools are calling me. I’m blessed to get the chance to visit them.

How was your visit to State?
It was a good atmosphere still but they told me it would be an older crowd because the kids were on spring break. But they still brought it.

Where do you put Michigan in the context with all these other top schools you’re hearing from?
I don’t have an exact place for them, but like you said Michigan has been there from the start and one of the big keys of my decision is going to be trust with the coaching staff and my relationship with the coaching staff. That comes with time, and Michigan has been there for a long time, so that plays a big part.

Is there a time frame for your decision?
We don’t have a timeline right now. I think I just have to sit down with my parents and discuss, talk about my goals. We have to sit down and figure all that out.

Has what you’re looking for in a school changed?
Nope. Just relationship with the coaching staff, like I mentioned, and trust with them. All places have great facilities and atmosphere nowadays, so now it’s just coming down to opportunity to play, coaching staff, and a coach that will make me work.