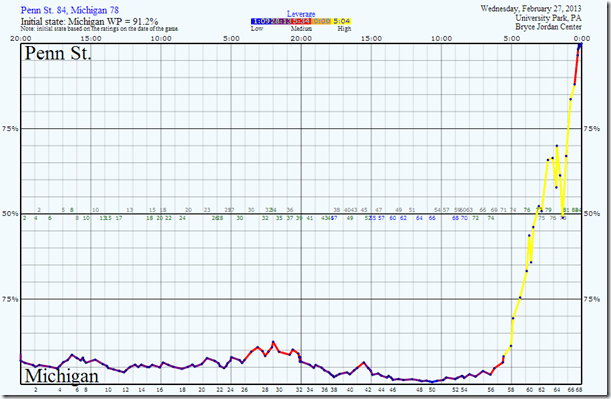 When Trey Burke and Jordan Morgan’s final efforts bounced off of the rim on Sunday evening, Michigan watched its Big Ten Tournament seed drop from a three to a five. The drop not only cost the Wolverines a share of the Big Ten Championship, it also means that Michigan will be playing on Thursday in the Big Ten Tournament. As fate would have it, Michigan will have to play the one bottom-tier team that its struggled against this season: 12th-seeded Penn State.

The Wolverines have played the Nittany Lions twice in the past month and have failed to impress. Michigan never led by double digits in an eight point home victory on February 17th and allowed a 15 point second half lead to crumble in the final 11 minutes on February 27th in State College. Penn State has improved – the Nittany Lions won at Northwestern and Wisconsin needed a buzzer beater to escape the Bryce Jordan Center with a win on the final day – but Michigan’s struggles against Penn State remain puzzling and frustrating.

Penn State has surpassed 1 point per possession in just six Big Ten games but five of those six occasions have come in the Nittany Lions’ last seven outings. Pat Chambers team has played hard all year but now shots are finally starting to fall. Despite the recent improvement, Penn State still has an ugly offensive resume.

Penn State averages just .91 points per trip in league games with a 43% effective field goal percentage – both conference worsts. The Nittany Lions turned the ball over on 19% of their Big Ten possessions (9th B1G) and only rebounded 29% of their missed shots (10th B1G). The lone strength of the Penn State offense is something that Michigan discovered in the second half of its road rematch: Penn State can get to the free throw line. The Nittany Lions attempts 34 free throws per 100 field goal attempts in conference play, 5th best in the Big Ten

Despite the horrific early conference offensive performances, there’s little doubt that Penn State is improving rapidly thanks to improved play from its two leading guards.  DJ Newbill’s improved shooting is a major reason that the Nittany Lions have found offensive consistency in recent weeks. Newbill has connected on 12 of his last 25 three point attempts after starting the season just 8-of-49 from long range. Jermaine Marshall is the name that Michigan fans will remember after the disaster in State College. Marshall hit six threes in that game and is 22 of his last 45 threes after starting the year 36 of 125 (29%).

Michigan struggled to defend the dribble penetration of both Newbill and Marshall, especially off of pick and roll scenarios, in both earlier games this season. The Wolverines’ ball screen defense has improved significantly in recent weeks but they will certainly be tested against the Nittany Lions’ perimeter quickness. The Nittany Lion ball screen attack isn’t just focused on its ball handlers, Sasa Borovnjak has emerged as one of the better roll men in the Big Ten. The 6-foot-9 senior has reached double figures four times in the last seven games after scoring in single digits for the first 11 games of the 2013 calendar year. Borovnjak was particularly effective in the first meeting against Michigan and continues to improve down the stretch of his final season.

Ross Travis tallied double doubles in both of the first two meetings, averaging 13 points and 11 rebounds per game against Michigan this season. Travis has reached double figures in just one other Big Ten game this season. The 6-foot-6 sophomore plays an undersized four role for the Nittany Lions and Michigan will be looking for a more consistent defensive effort from its freshman combo forward, Glenn Robinson III, against Travis.

Michigan scored 149 points in 135 possessions against the Nittany Lions in regular season play, a solid 1.10 points per trip. Save for a dismal close to the last meeting, the Wolverines had very few problems scoring against Penn State’s defense.

Penn State is a strong defensive rebounding outfit, grabbing 71% of its opponents misses, but struggles to defend the interior without fouling. Big Ten opponents shoot 50% on twos against the Nittany lions, that’s second highest mark allowed in conference play by a Big Ten team. Fouling has been Penn State’s undoing time as the Nittany Lions surrender 55 free throw attempts for every 100 field goal attempts.

Ken Pomeroy projects an easy Michigan victory, 76-60, with just an eight percent chance of a Penn State repeat upset. Michigan is the more talented team, the team with more to play for and should have motivation after being upset at State College. But there’s no denying that Penn State plays as hard as anyone and will take a significant amount of confidence into the third match-up after playing so well in each of the first two meetings. This win probability chart of the second meeting serves as a stern reminder of how quickly a game can change: