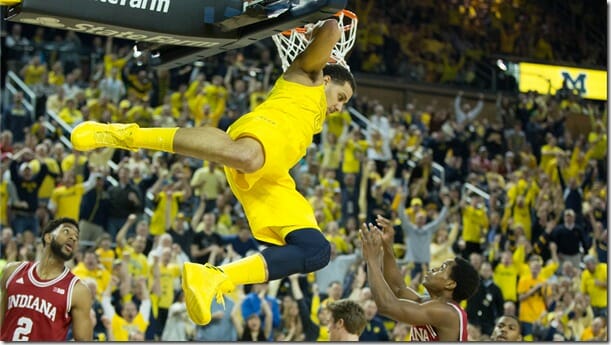 Michigan has experienced its share of tough losses this season, but Sunday’s loss to Indiana in the final minute was perhaps the most heartbreaking. The fact that they were playing for a share of the Big Ten championship makes it especially painful, not to mention the game looked sewn up in Michigan’s favor with about a minute to play.

Jordan Morgan took media back through the final seconds of the game during a press conference on Tuesday.

“I remember feeling like it was over at one point. Then slowly, things just weren’t going right. Missed free throw here, basket, missed free throw there, foul, another missed free throw, basket, and then it’s like, holy crap, we don’t have any timeouts. We’re down by a point,” Morgan said. “I remember looking and seeing 10 seconds left on the clock. I don’t really know if anybody realized or thought about what we were going to do but I remember telling Trey come on, let’s go. I set a screen for him.

“After that, he came off the screen, he had leverage, the shot went up and I just followed, hoping to get a second chance. I remember the ball sitting on the rim when I tipped it. For a split second I was excited because it looked like it was in. Then it fell off, and it was just shock. I just stood there and I didn’t know what happened. I don’t think I really knew what was going on until we got to the locker room.”

The question now becomes, can the Wolverines get over this disappointment in time to make a run in the Big Ten Tournament? It’s impossible to know the answer until they step on the court against Penn State Thursday afternoon at the United Center. It’s also a frustrating question to consider for fans because the answer is entirely reliant on the emotions of the players, something unquantifiable and notoriously unreliable.

However, there is precedent: Against Wisconsin in Madison, it looked as though Michigan had the game in check after a made 3-pointer by Tim Hardaway Jr. put the Wolverines up by three with about two seconds left. But Ben Brust made a half-court heave that sent the game into overtime, and Michigan ended up losing.

In their next game, the Wolverines looked like zombies at the Breslin Center, where they suffered by far their worst loss of the season at the hands of Michigan State.

Thursday will be a chance to see how much Michigan has learned since that point, and whether or not they’ve improved at overcoming emotional losses and focusing on the next game. After losing to Indiana, players used all sorts of different methods for getting their minds off the game.

“I went home and watched Space Jam,” Morgan said. “It was on TV, and it’s one of my favorite movies. I wasn’t really feeling well, I was sick, but it was good to get some laughter, laughter’s the best healer. Anytime you think about it, it hurts. It’s disappointing.”

Glenn Robinson III said talking with his family helped him get through that first night after the loss.

“For me personally, I went home and tried not to think about it as much. I didn’t watch ESPN or SportsCenter or none of that. I couldn’t eat after the game,” Robinson said. “I talked to my mom and my grandma and they do a great job of lifting me up.”

It’s a given that the coaches will stress moving on immediately from the disappointment of a game like that one and focus on the next challenge. Morgan mentioned that’s exactly what has been keeping his mind off the loss: looking ahead to the next game and all the work and preparation that goes into that. In other words, keeping busy.

But Robinson said there are some players who give the team an extra boost in moving forward from the loss.

“Right after the game, I think the last thing guys want to hear is we need to move on, we need to move forward. I think someone who does an excellent job of that is Trey (Burke) and Jon Horford,” Robinson said. “They do a great job of trying to move past things, or not stressing too much about one individual area, not blaming one person. It’s a team effort, like they said, and we just gotta move on and learn from our mistakes.”

As Michigan found out after losing the heart-breaker to Wisconsin, that is easier said than done.