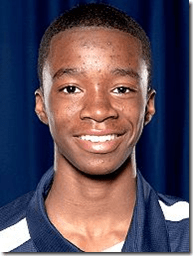 2014 Michigan target Edmond Sumner is one of the fastest rising recruits in the state of Michigan, and his stock continued to increase after Monday’s Regional Semifinal victory over Chandler Park.

After taking a three-point lead into the second half, Sumner put his team on his back, scoring 11 points and dishing out two assists in a two-minute span, igniting a 29-6 third-quarter run to put the game away.

In front of Michigan coaches John Beilein and Bacari Alexander, Sumner showed incredible versatility, scoring from all over the floor, including converting four 3-pointers, and proving to be a tough matchup for several defenders.

He showed improved ball-handling and poise, and was tenacious defensively, helping to hold Walton to 14 points, shutting down the Mr. Basketball finalist and the Chandler Park offense.

Sumner grew four inches in the last several months, and is still adjusting to his new-found height. At 6-foot-4, and only weighing 150 pounds, the junior has a lot of filling out to do, but if he can gain some strength and continue to develop his game, the athletic floor general could be a perfect fit to Beilein’s system.

“He’s got all kinds of skills. He can shoot the three, and he can create and find people. He’s a very hard guy to keep out of the lane,” Keener explained. “He makes the extra pass, and if (defenders) are concerned about the assists as the ‘dipsy-doodle’ finishes, then that just makes us better.”

After the game we caught up with Sumner to discuss his performance and recruitment.

First of all can you talk about your overall thoughts on your performance tonight, and especially in the third quarter when you went on that run?

You converted a huge alley-oop during the run that really got the crowd into it. Can you take me through that play and what happened there?

“That’s our little special…to put the icing on the cake. I knew I was going to go get it.”

How tall are you, and how much do you weigh these days?

How did your game progress this season? What have you improved on the most?

“I’m trying to become a more pure, more mature point guard. I can still score, but I want to get my team involved first.”

Can you give an update on your recruitment? What schools have shown the most interest lately? Any recent offers?
“I have offers from UMass, Xavier, Kent State, Toledo. Michigan is recruiting me, Michigan State, Iowa and Illinois.”

What have Michigan coaches been telling you about your game and about a possible offer?
“Really the main thing is just getting stronger. Then possibly down like AAU season, I probably get an offer.”

How do you think you’d fit in with Coach Beilein’s system if you went to Michigan?
“He kind of likes lanky guards, so yeah, I think I’d fit in there pretty well.”

Have you visited any other schools lately? Any plans for any visits in the next few weeks or months.
“No I haven’t, but I’ll probably get down to Xavier soon.”

What’s the No. 1 thing you’re working on to improve on right now?
“Right now, strength, and coming off the pick and shooting mid-range.”

How much weight have you gained lately?
“Yeah. Since last year, I’ve gained over 20 pounds. Last year I was only like 130.

Do you have a timetable for when you want to make a college decision?
“I don’t really know right now. It’ll probably be after the AAU season.”

What are your goals for the rest of the season, both individually and as a team?
“Really, just get to the Breslin and win a state championship.”