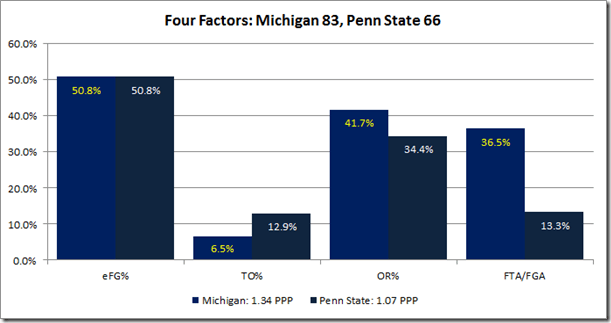 It’s becoming clear that Michigan’s defense isn’t going to transform into one of the nation’s best overnight. It’s already March and the only option is to lean on what got you this far. For Michigan, that’s offense. The Wolverines still have one of the very best offenses in the country; an offense good enough to outscore all but the very best scoring teams in the country. Despite recent improvement, Penn State doesn’t come close to that category.

The Nittany Lions rattled off a 14-0 run in the game’s opening moments but Michigan rebounded and was able to take a 19-16 lead and keep Penn State at arm’s length before pulling away down the stretch. The Wolverine offense rarely sputtered, scoring an impressive 83 points on just 62 possessions – 1.34 points per trip. The defense left something to be desired but the Nittany Lions didn’t have another Herculean offensive performance in reserve and simply couldn’t keep up with Michgan’s firepower.

A comfortable win over Penn State is only important because it isn’t a loss. The win won’t send the Wolverines flying up the S-curve or ease the disappointment of Sunday’s loss to Indiana but it keeps Michigan in the same place it was before Thursday’s game and sets up an intriguing quarterfinal against Wisconsin.

Michigan’s offense dominated despite an average shooting night – 51% effective field goal percentage, 52% two point shooting, 32% three point shooting – because it was able to control the other three factors. The Wolverines rebounded 42% of their missed shots, converting 28 second chance points, and only turned the ball over on seven percent of its offensive possessions. The offensive rebounding was a welcome sight but since February 5th against Ohio State, Michigan hasn’t rebounded over 30% of its misses against any team other than Penn State. Michigan was able to exploit the foul happy Nittany Lions by attempting 23 free throws to 63 field goal attempts.

This was Michigan’s 4th best offensive performance in a season that’s been defined by superb offensive performances. It was also the first time that Michigan had topped 1.20 points per possession since January. Most of the talk of Michigan’s regression has surrounded the defense – and rightfully so – but the Wolverine offense has also gone from the very best in the country to “very good” over the last month. Finding an offensive groove on a neutral court could be a strong first step toward a post-season run in Chicago or beyond.

Michigan’s big men were especially impressive on the offensive end of the floor. While Jordan Morgan went 2-of-6 from the floor, Mitch McGary and Jon Horford combined to score 21 points on 9-of-12 shooting. McGary dominated the first half with his offensive rebounding, while Horford was effective scoring all around the basket in the second.

Defensively, this isn’t a game that’s going to leave many warm feelings. Penn State is much improved offensively but allowing the Nittany Lions to score 1.07 points per trip is still not great defense. Three of Penn State’s four best offensive performances against Big Ten opponents have come against Michigan. The Wolverines didn’t force many turnovers but did manage to keep the Nittany Lions off of the free throw line. Penn State rebounded 34 percent of its missed shots but only managed to score 15 second chance points.

Michigan will face Wisconsin on Friday afternoon (~2:30 p.m. eastern) in quarterfinal action in yet another revenge opportunity as the Wolverines look to make up for Ben Brust’s half court buzzer beater.