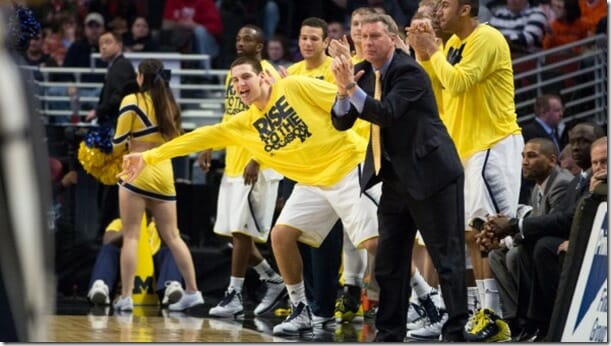 With 14:12 left to play in the first half of its first-round match-up against Penn State in the Big Ten tournament, Michigan found itself down 14-3. The Wolverines were letting the Nittany Lions score at will in the paint, and they were unable to convert layups of their own. They needed a boost, desperately.

Michigan’s freshman spark plug went to work immediately, scoring a lay-in off the dish from Trey Burke around the 14-minute mark. McGary displayed great hands and strong rebounding ability as he bullied his way to 10 points and 10 rebounds in the first half.

“That’s Mitch McGary. That’s how he is. He’s able to come off the bench and give us a spark. Once he comes off the bench and gets the crowd into it — he does that a lot,” Trey Burke said during the post-game press conference following Michigan’s 83-66 victory. “But that gives us energy. Him being a freshman, that goes a long way. That goes to show that, hey, he’s definitely going to be a future captain on this team and that he has the ability to bring the spark to this team, not only at the offensive end, but on the defensive end. I think he had six or seven rebounds within 10 minutes. And that just goes to show how much effort and intensity he plays with.”

Jordan Morgan struggled mightily in the first half, getting his shot blocked numerous times and failing to convert easy baskets off passes from his teammates in the pick-and-roll. His poor play was a reflection of Michigan’s whole team during the first six minutes of the game.

But after McGary’s first basket, Michigan peeled off an 11-0 run that tied the score at 14, and the freshman big man contributed six of those 11 points. As usual, it was McGary’s energy and hustle that made the difference, along with his nose for the ball.

Jon Horford comes on strong in the second half

Mitch McGary wasn’t the only reserve big man to make an impact for the Wolverines. While the Chesterton native may have owned the first half, the second half was all Jon Horford.

Horford finished the game with 11 points — and all of them came in the second frame.

Michigan’s redshirt sophomore said he thought the Wolverines’ early struggles could possibly be attributed to the early tip and not having played since Sunday.

“I feel like that’s natural, you know, with an early game like that,” Horford said. “Getting out there, you go up and down, then you get a stop and everyone gets into a rhythm.”

Once Horford established a rhythm, he scored in a myriad of ways: whether it was using his big frame to seal off his man and receive a dump-off from one of the guards, tapping in an offensive rebound, or even finishing at the hoop with a couple of late dunks, Horford was everywhere.

It was the first time since Michigan played Northwestern on January 30th that Horford has cracked double-digits. But for Horford, the focus needs to be on rebounding, not scoring. That, he said, is what will decide Michigan’s fate this postseason. With only three rebounds on Thursday, it’s an area he still needs to work on.

“That’s going to be key to our success in the postseason,” Horford said. “Rebounding, limiting other teams’ offensive rebounds.”

It’s the nature of playing in a tournament: as soon as one game is over, preparation starts for the next game.

Michigan assistant coach LaVall Jordan said the coaching staff already has all hands on deck working on the scout for Wisconsin, but the priority right now is getting the players rested.

“We already have our scouts divided up,” Jordan said. “Right now we need to get our guys rested, back to the hotel, get them a good meal, and start with recovery.”

Wisconsin isn’t going to fool anyone — everyone knows how the Badgers win, it’s just a matter of stopping them. Which, of course, is easier said than done.