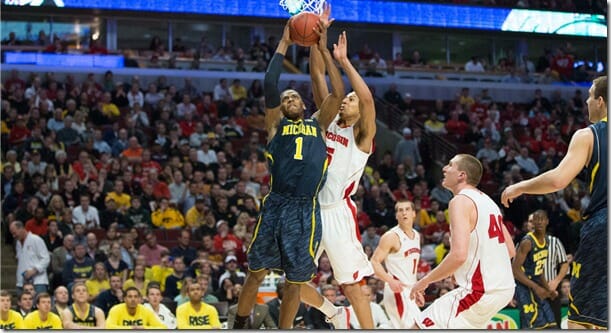 Michigan’s long weekend in Chicago was cut short as the Wolverines fell to the Wisconsin Badgers, 68-59, in Friday afternoon quarterfinal action.

The half-court shot heroics and overtime drama of the two teams’ first meeting was absent as Michigan fell victim to the Wisconsin machine and  John Beilein lost his 11th game in 12 tries to Badger head coach Bo Ryan.

For the most part, this game was filled with hearty doses of the very best and worst that both teams can bring to the table.

The first half was a vintage Wisconsin basketball on both ends; suffocating defense and dismal offense. The Badgers made just 5-of-29 shots from the field but prevented the Wolverines from pulling away because the usually efficient Wolverines couldn’t muster much more offensive firepower. The Badgers pulled within three points at the break, trailing 20-17, and shots began to fall in the second.

Michigan’s offense was bad, scoring just .87 points per possession, but this game was decided by a dreadful defensive stretch in the second half. Jared Berggren missed three layups to open the second period but then the Badgers rattled off 39 points over their next 20 offensive possessions – that’s 1.95 points per trip. That offensive explosion spanned from the 18:46 mark to 6:01 and over that time period Michigan recorded three defensive stops while Wisconsin made six three pointers.

That defensive stretch would be troubling in any context but stretches of the sort have almost become commonplace in recent weeks as Penn State and Indiana both had at least comparable periods of offensive perfection over the last month.

The half by half efficiency numbers are staggering but not surprising.

Points Per Possession by Half

Michigan is simply unable to play consistent defense for a 40 minute game. The final game numbers don’t look that bad, especially Michigan’s impressive defensive rebounding, but those metrics are skewed by just how awful the Badgers were in the first half. Wisconsin’s 46% effective field goal percentage looks solid but look closer and you see that Bo Ryan’s team had a 21% eFG% in the first half and a 71% eFG% in the second half.

Michigan’s offense wasn’t much better than Wisconsin’s in the first half and was unable to generate much offense in the half court at all. Michigan found a couple nice transition opportunities in the first half but couldn’t get the stops to trigger that secondary break game in the final 20 minutes. For much of the second half, Michigan still managed to play shot-for-shot with Wisconsin but eventually a couple opportunities rimmed out and the Badgers pulled away.

Burke and Hardaway did most of the heavy lifting in the second, combining for 25 of Michigan’s 39 points. Wisconsin’s defense essentially reduced Michigan’s offense to isolation as just 3 of 13 second half field goals (and 7 of 23 for the game) were assisted. Trey Burke was the only Michigan player to record an assist in the game. Frustration with the poor shooting, lack of threes and assists, and the high quantity of mid to long-range jumpers is fair but it’s also important to remember that Wisconsin is the Big Ten’s best in most of those statistics. The Badgers lead the Big Ten in lowest percentage of assisted field goals and three point attempts allowed as well as inside and outside field goal percentage defense.  Michigan isn’t likely to see another defense that good until late in the NCAA tournament.

Now the question is what seed does Michigan end up with on Selection Sunday? If the Wolverines were flirting with the boundary between a 2 and 3-seed entering today’s game they are most likely going to find themselves on the lower end of the 3-seed range after this loss. That should still be strong enough to open tournament play at the Palace of Auburn Hills. Michigan will have 6 or 7 days off before its tournament opener and the rest could provide a perfect opportunity to regroup.

Rattle off a handful of wins over the next two weeks and Michigan’s late season swoon will be forgotten but if the Wolverines are sent home packing during the first weekend there will be a lot of head scratching trying to figure out what happened from February onward.