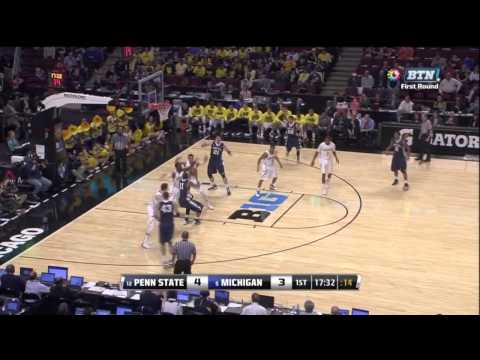 While the argument could be made that Michigan’s defense was better than the numbers bear out for this game, no one would argue that the Wolverines played good defense in the game’s first four minutes. Four of Penn State’s six baskets within the first four and a half minutes of game action came in the paint, and in a remarkably easy fashion. As we can see in the video clips above, Penn State was exceedingly patient in their offensive sets, using off-ball screens exceptionally. In the first play, Nick Colella sets an off-ball screen for Travis Ross, guarded by Glenn Robinson III. Ross uses the screen and cuts to the basket, in the process keeping Robinson behind him with a great seal. Jermaine Marshall gets him the ball at the last possible second and the result is a layup. The tremendous use of the screen, combined with the individual effort of Ross, made that play happen. On the last play of the sequence, Penn State’s patience with the ball comes into play: Colella throws the ball to Ross in the post. Mitch McGary hints at doubling Ross, and Ross goads him into it by dribbling and being idle with the ball. McGary finally has enough and doubles Ross, and as he does that McGary’s man, Sasa Borovnjak , cuts to the hoop. This is just what Ross wanted, and he dumps the ball off to Borovnjak for the easy two.The coaches and players attributed these trip-ups on defense to a lack of communication, and while credit needs to be given to Penn State for running really effective action against Michigan, it sounds like a reasonable culprit.

2) Mitch McGary has a monster first half

It’s tough to have a better first half than Mitch McGary did in Michigan’s match-up with Penn State on Thursday. Record a double-double: check. Revive a struggling offense: check. Re-establish a presence on the glass: check. McGary did all of this and more, the way he does everything: with exuberance and passion that is contagious. McGary entered the game for a non-existent Jordan Morgan, and it made all the difference in the world for Michigan. The freshman rattled off six of Michigan’s next 11 points and most of them came off of second-chance opportunities. With McGary, you can’t expect him to have great position all the time — but he is so active around the basket he simply gets a hold of deflections he had no business getting. Take a look at the play that occurs at the 35-second mark of the above sequence. There’s a difference between getting rebounds that are “yours” — rebounds a player is in position for and should come down with — and getting rebounds that aren’t “yours” — rebounds a player shouldn’t be expected to get. McGary has no business snagging that rebound; in fact, he doesn’t, because John Graham already has it in his hands. McGary strips the ball, comes up with it, and lays it in. He simply wouldn’t quit on the glass Thursday, and if that’s the Mitch McGary who shows up in the NCAA tournament, it would give Michigan a major boost.

You’re excused if you felt chills when reaching the end of the first half on Thursday — Michigan’s lead evaporated in much the same way as it did in the last 10 minutes of Penn State’s upset of the Wolverines in Happy Valley not even a month ago. Michigan begins the above sequence with a solid nine-point lead, a lead they established purely because of its prolific offense. With three minutes to go, Penn State gets a few stops and makes a few shots and before Michigan knows what’s happened, it’s walking into the locker room having surrendered almost all of its lead. The Nittany Lions accomplished this in just three plays, two of which were simply excellent plays by DJ Newbill. In the first, Penn State runs Newbill through two separate but consecutive screens on the perimeter that free him from Trey Burke. When Newbill knows Burke is behind him, he received the ball and knocks down the midrange jumper. Later, Newbill splits two defenders with his dribble — something he almost certainly wouldn’t have been able to do even two months ago — and nails a contested jumpshot. But sandwiched between those two plays is one where Michigan’s transition defense simply fails. The Wolverines are too unorganized to match up and wind up letting Nick Colella nail a wide-open 3-pointer.

4) Michigan plays improved interior defense in the second half

The numbers may not explicitly bear this out, but Michigan’s defense — especially in the post — improved in the second half. Glenn Robinson III got the new emphasis on defense started with a steal on the perimeter that led to a dunk, but it was mostly the inside defense which saw the most improvement. There are a few different reasons for this improvement, one of them being better communication between the guards and bigs. However, one thing that stood out was how active the Wolverines’ hands were in the second frame. In the second play in this sequence, Trey Burke does a terrific job of stripping Jermaine Marshall as the guard spins to the hoop, causing a turnover. Again in the very next play of the sequence, Marshall tries the drive and about three Michigan players get their hands on the ball, the last being Jon Horford, who blocks the shot emphatically. Tim Hardaway Jr. forces a turnover by getting his hand on the ball as DJ Newbill drives to the paint. In the first half, Newbill probably gets to the paint and is either fouled or scores. In the second half, Hardaway gets his hand on the ball and takes the steal in for an easy dunk. Active hands on defense was a big reason Michigan was able to make strides in defending the interior as the game wore on.

5) Jon Horford makes his presence felt in the second half

If the first half belonged to Mitch McGary, the second belonged to Jon Horford. Michigan’s redshirt sophomore scored all of his 11 points in the second frame, and did so with both style and efficiency. Horford kicked things off with a tip-in after trailing a Trey Burke layup. After deciding that was far too timid, Horford finished off the half with two dunks, one on a spectacular play that demands recognition. It’s hard to tell whether or not the final play in this sequence was designed or a simple matter of good, smart players finding the right holes, but it was fun to watch. As Spike Albrecht brings the ball up on the perimeter, he gets a screen from Matt Vogrich. Brandon Taylor wisely hedges, leaving Vogrich and pushing the action further toward half court. Meanwhile, with all the action occurring near half-court, there’s a bunch of open space just underneath the free-throw line. With Trey Burke handling the ball, the Nittany Lions generally went under screens because of how dangerous he can be turning the corner and off the dribble. Against Albrecht they tried hedging hard and paid for it. Albrecht finds Nik Stauskas cutting across the middle as though he were running baseline, but then he quickly dumps the ball to the man actually running baseline: Jon Horford, who finishes with a jam.