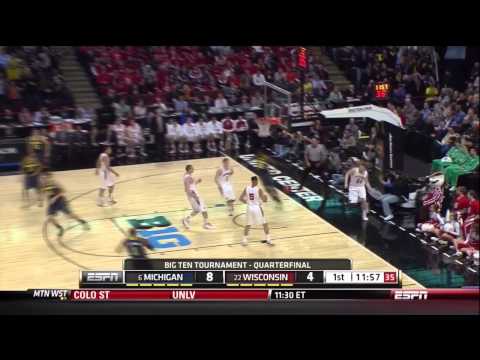 Neither Michigan nor Wisconsin could get anything going on offense in the first half, but early on, at least Michigan seemed to have one recourse: its notoriously efficient fast-break attack. With Wisconsin missing pretty much everything, the Wolverines were free to get into run-out situations in which the Badgers only had two or three players back. The three buckets in this sequence represent three straight baskets by Michigan in the middle of the first half, when it looked like the Wolverines had Wisconsin back on its heels. On the first play Nik Stauskas comes down with the defensive board after Mitch McGary plays excellent defense on Jared Berggren and forces a miss. Trey Burke starts the break with McGary trailing on his left side. Burke is one of the best in the country at being decisive at the free-throw line on fast breaks, and on this play he hits McGary cutting to the basket just as he reaches that marker — Dan Dakich would be proud. The next play is just a spectacular find by Burke and a great finish by Tim Hardaway Jr. over Mike Bruesewitz — Burke, playing the role of quarterback, threw it where only Hardaway could catch it. On the final play, Wisconsin only has two back and Burke lobs to Glenn Robinson III at the last second for the lay-in. While Michigan was running the fast-break to perfection during this sequence, those opportunities would dry up quickly as the half progressed.

2) Michigan, Wisconsin trade scores to end the first half

Despite both teams hurting for offense throughout the first frame, both came up with big shots going into halftime. After going up by eight points with 4:35 left, Michigan didn’t score again until this lay-in by Glenn Robinson III. During that time, Wisconsin scored four points on four free throws to cut Michigan’s lead to a more manageable four. With Michigan looking at a possible two-for-one situation going into the break, Robinson takes matters into his own hands with 30 seconds left. The freshman pump-fakes Jared Berggren as he challenges the corner 3-pointer. Robinson puts the ball on the floor and makes a nice move to the basket, scoring at the rim over Traevon Jackson. On the ensuing possession, however, Jackson gets his revenge. Wisconsin, having gone even longer than Michigan without a field goal at that point, needed a score desperately and they got it. Jackson doesn’t do anything special on this play, just puts up a heave from the wing with Trey Burke in his face and cashes it. There was a feeling that Michigan had completely let Wisconsin off the hook in the first half, squandering a brilliant defensive effort and horrid Badger shooting by only going into the break with a three-point lead.

3) Wisconsin catches fire from beyond the arc

Wisconsin’s 3-point barrage to begin the second frame was partly a case of karma evening itself out. The Badgers simply have too many good shooters on their team to continue shooting that poorly. That being said, Michigan certainly helped them out by relaxing a bit defensively in the second half. Multiple defensive lapses led to Wisconsin making five long-range bombs in the first nine minutes after the break. It started with Nik Stauskas getting caught ball-watching, an unfortunate habit he’s developed. As Ryan Evans backs down Glenn Robinson III in the post, Stauskas loses track of his man, Ben Brust, drifting to the 3-point line. Evans finds Brust, who nails a three. There were also times when Michigan players found themselves in untenable situations, as with Mitch McGary on the next play in the sequence. McGary ‘s attention is on helping in the post, where Evans is once again backing down Robinson. McGary’s man, Frank Kaminsky, shows just how valuable a shooting big can be by hitting a 3-pointer with McGary woefully unprepared to close out. Confusion reign on the next play, with Tim Hardaway Jr. the only Wolverine in the vicinity of three Badgers on the perimeter. Robinson takes off to close out on Bruesewitz from nearly the charge/block circle as Bruesewitz lines up for a 3-pointer and hits it. Finally, Michigan gets burned on the trapping hedge by Jon Horford, with Robinson left to guard both Berggren in the post and Bruesewitz on the wing. By the end of this aerial assault, Wisconsin held a 43-37 lead and Michigan was searching for answers.

Michigan found its answers the same way it usually does: on the fast break. The secondary fast break, that is. These buckets didn’t come from layups off run-outs — rather, they came when Trey Burke continued to push the pace with every defender back but not yet set. The first play was a result of terrific on-ball defense by Burke, who forces the steal and gets to the line, hitting two free throws. On the second play, Michigan forces a miss by Wisconsin and Burke pushes the ball upcourt. No one is better at dictating the pace of an offense, and Burke does a masterful job of that here. He comes flying off the screen by Mitch McGary, and with both Wisconsin bigs on their heels, pulls up for a floater. With the Badger bigs still getting set, they weren’t able to contest the shot the way they would have liked. McGary muscles his way to an offensive rebound and putback in the next play of the sequence, but the play after is all Burke once again. Pushing the ball off the missed shot by Wisconsin, Burke sees only Mike Bruesewitz in front of him and the basket and easily blows by him. Burke makes an exceedingly difficult reverse lay-in over Frank Kaminsky for two points and all of a sudden Michigan is right back in the game, down just two points and in great position to take it down to the wire with three and a half minutes left.

Just as Michigan was building momentum going into the final minutes of what appeared to be close game, Wisconsin wisely called a timeout. About 30 seconds later, Spike Albrecht committed a foul and the under-four timeout had arrived. It’s impossible to know with nebulous and unquantifiable things like momentum, but the long break seemed to have a dampening effect on the Wolverines. On the first possession after the timeout, Michigan played excellent defense for 35 seconds and Wisconsin couldn’t find an open look. Finally, at the end of the shot clock, Frank Kaminsky put up a midrange jumper that found rim twice before falling through the hoop. It was a deflating basket to say the least, and after that Michigan never looked the same. Following that make, Michigan missed on a few opportunities at the offensive end and soon it was fouling time. Wisconsin outscored Michigan 10-5 from that point on as Michigan continued to struggle finding open looks. Despite the closeness of the game near the end, it had the feeling of a missed opportunity by Michigan after playing such good defense in the first half, along with missing seven free throws down the stretch.