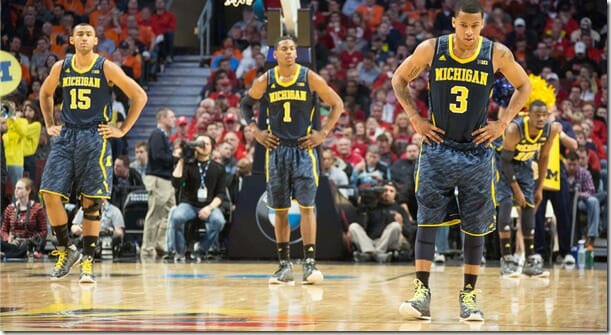 Michigan’s so-called “revenge tour” turned out to be a rerun after the Wolverines lost to Wisconsin in the quarterfinal round of the Big Ten Tournament, 68-59. And while they will have to forget this loss quickly as attention turns collectively to the NCAA tournament, Michigan will have to address some season-long issues that were exposed once again against the Badgers.

The mot pressing is the defense. Almost every player mentioned it as the number one thing the team needs to address, and so did John Beilein. It’s not that Michigan’s defense can’t be good — it just isn’t consistent.

“We have to keep looking for defensive consistency,” Tim Hardaway Jr. said after the game on Friday. “Defense goes a long way when you’re in the tournament.”

Michigan’s loss to Wisconsin bore out this need for consistency in defensive effort. In the first half, Michigan’s defense was great, holding Wisconsin to just 17 points on 34 possessions, But things got worse in the second frame as the Wolverines surrendered 51 points on just 33 possessions while allowing the Badgers to make six of nine 3-point attempts.

“There’s so many things you have to continue to get better at and all it takes, a team like this, it isolates you so much, it takes one breakdown here or there and they’re scoring points. The second half they scored at will. So that will be the big thing,” Beilein said during the post-game press conference Friday. “We’ll fix it the best we can. We have been trying all year long. There’s a process that we all have to go through to get better at it and hopefully we can shore up enough to continue playing for a long time.”

“A long time” would presumably mean playing through the early rounds of the NCAA tournament and reaching the Final Four. Trey Burke was clear that that was the team’s goal now and that’s where its focus lies.

While it’s always tough to lose to a team twice in one season, Burke looks forward to playing teams outside the conference, who may not be so intimately familiar with Michigan’s game strategy.

“Now that we’re done playing Big Ten teams, we may be able to run some type of sets and run some things that we’re not really able to execute as well against other Big Ten teams because of their scouting,” Burke said.

Offense a struggle for Michigan in loss to Badgers

A quick glance at Wisconsin’s halftime stats from Michigan’s 68-59 loss to the Badgers could be used to induce vomiting for anyone who loves the sport of basketball.

Wisconsin registered an effective field goal percentage of just 21 percent, good for a mere .51 points per possession. The Badgers couldn’t get anything going offensively and had been completely stymied by Michigan’s defense.

The problem for the Wolverines? Their offense wasn’t much better.

Michigan entered halftime with just a 20-17 lead. However, Trey Burke said after the game he felt like the Wolverines were running the offense and getting good looks — they just weren’t knocking them down.

“It’s difficult (to play Wisconsin). Especially when we shot the way we shot as a team in the first half. We had some really good looks, just didn’t fall,” Burke said during the post-game press conference. “I think that today we didn’t have the best offensive game. I think we got to really, got really a lot of good looks. So it wasn’t really our offense.”

It was Burke especially who had trouble getting shots to fall in the first frame. The point guard, who averages almost 20 points per game, found himself with just four points at the break on 2-of-7 shooting.

If Burke hits a few more shots, Michigan may have gone into halftime with the sort of commanding lead one would expect after an offensive performance like Wisconsin turned in. But Burke said that, once again, he felt he was getting good shots — they just weren’t going in.

“I got really good looks, good five foot to seven foot jump shots, and I was open on a lot of them and they just weren’t falling today,” Burke said. “That’s just something that I have to play through. I have to continue to play through and try to get my teammates going.”

In the first half of the game Friday, Michigan’s ankle curse continued to bite them. Tim Hardaway Jr. went up for a shot and landed awkwardly on his ankle, causing him to head for the locker room. He later returned to the game and seemed not to be hampered by it.

“I’m fine now. It was hurting for a little bit. When I came back out it was hurting,” Hardaway said. “But it loosened up while I was playing on it and it got better while the game was going on.”

Hardaway did his post-game interview with the ankle submerged in a tub of ice.