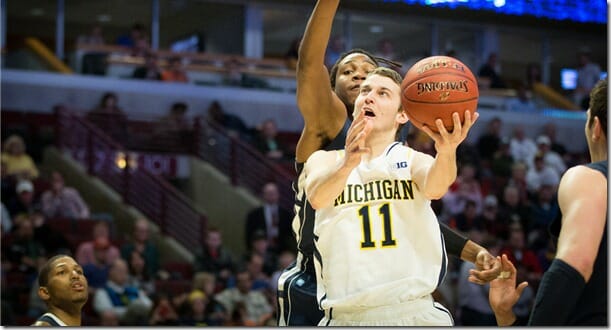 Selection Sunday has finally arrived. There’s no suspense as to whether the Wolverines will be included in the field but recent doubts have begun to creep in as to where Michigan will be seeded and where it will play.

The largest question facing the Wolverines on Selection Sunday is whether they will open the NCAA tournament 30 miles up the road at the Palace of Auburn Hills or will be shipped out to a distant venue for the opening rounds of the NCAA tournament.

Starting the tournament in its home state could be critical for a Michigan program that hasn’t reached the Sweet 16 since 1994. Syracuse’s loss to Louisville on Saturday evening could prove critical as the Orange appeared to be one of the primary threats to sneak into the Auburn Hills pod, but nothing is official until the brackets are announced at 6:00 p.m. on CBS.

Find the typical Nitty Gritty and Around the Big Ten sections as well as an expanded rundown of bracket projections and a seeding rooting guide for the rest of today’s action after the jump.

Indiana’s loss to Wisconsin and Louisville’s Big East Championship win over Syracuse leaves the door open for Louisville to lay claim to the No. 1 overall seed and the Midwest regional. Indiana getting shipped out of Indianapolis would certainly be a blow to the Hoosiers but it could open the door for another Big Ten team, perhaps Ohio State as a No. 2 seed, to sneak into Indianapolis as well.

Ohio State’s win over Michigan State means the Buckeyes should be the second highest seeded team out of the conference. A win over Wisconsin on Sunday afternoon would all but cement a No. 2 seed while the Spartans appear destined for a No. 3 seed, presumably ahead of the Wolverines.

Wisconsin’s Big Ten Tournament run in Chicago will certainly boost its seeding chances but the question is how high? Wisconsin still has 10 losses and a fairly mediocre non-conference resume to fall back on. Could Wisconsin hurdle Michigan into a No. 3 seed at the Palace of Auburn Hills? It seems unlikely but never say never.

Yesterday’s rooting guide didn’t go exactly as planned but perhaps the biggest game of the night was Syracuse-Louisville. Louisville’s second half rally looks like it should be enough to prevent Syracuse from hopping the Wolverines and stealing the Auburn Hills regional.

The key game of interest this afternoon will be the Big Ten Championship with Wisconsin and Ohio State facing off. Michigan fans will hope that the Buckeyes can handle business and prevent the Badgers from rising any further up the S-Curve.