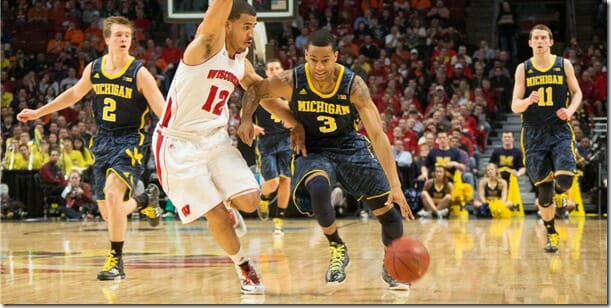 After it became clear in the aftermath of Selection Sunday that Michigan’s players and coaches weren’t sweating the location of their second-and-third-round games — the Wolverines ended up close to home in Auburn Hills — the talk quickly turned to Michigan’s second-round opponent: South Dakota State.

The Jackrabbits, out of the Summit League, have one of the nation’s best scorers in point guard Nate Wolters, and along with that one of the country’s most efficient offensive attacks.

"I just took a quick glance at the roster. I see seniors, I see a team that goes to the foul line and shoots 75 percent, I see a great point guard and four guys averaging double figures," John Beilein said during a press conference held after Michigan learned of its seeding. "They went to New Mexico and won this year, so that should say a lot about who they are. We’re going to really have to play great basketball."

Beilein covered most of it, but let’s flesh out the numbers a bit for South Dakota State. It’s true that the Jackrabbits make 77 percent of their free throws, but they don’t get to the line all that often; their free throw rate of 33.5 is ranked 242nd on the nation. They don’t turn the ball over and their effective field goal percentage is an impressive 53.5. Overall the South Dakota State offense ranks firmly among the top 50 in the country.

The number one objective to stopping such a dynamic offensive attack is stopping Nate Wolters. That has been easier said than done so far this season.

"I know Nate Wolters. I played with him at Kevin Durant’s skills academy this summer," Tim Hardaway Jr. said. "He’s just a humble individual. He has a great work ethic and he just loves playing basketball."

One thing that stands out about Michigan and South Dakota State is the similarity between the two teams. Both teams are great at taking care of the ball, both have extremely efficient offenses, and both sometimes have trouble getting to the free throw line.

"I have to look at them more, but I just glanced at their assist numbers, their free-throw numbers, their 3-point numbers, they’re very similar to us," Beilein said. "I do know that we’ve got to be able to defend the three, that’s for sure. And the drive and kick, that’s what my assistants are telling me. That is not a style you see a great deal of in our league, three or four perimeters – Northwestern plays a little bit like that. … I really don’t know about the schemes that they run, but they have great talent and a lot of veterans."

The Wolverines have played all season with the glaring lights of the college basketball world fixed squarely on them. They came out the gate as a top-5 team and spent a significant portion of the season in the top-3, even nabbing the top ranking for a week before falling to Indiana in Bloomington.

Michigan was ranked in the top ten throughout the entire season but ended up in the No. 13 slot on the committee’s official seed list.

Trey Burke has talked before about how he thought the pressure caused by all the attention may have gotten to some of the players. Naturally, now that Michigan is a four seed in the NCAA tournament and seen as a team that could be upset, Burke relishes their new-found overlooked status.

"We’re not really out there, we’re not getting the amount of exposure we were getting in the beginning of the year," Burke said. "I definitely think a lot of people have us in their brackets as a team that can get upset, and I think that’s motivation to us and we’ll use that to our advantage."

It sure has been a while since Michigan has been able to use the classic "us against the world" cliché, but in this case it could provide the team with a lift after ending the season on a sour note, losing six of its last 12 games.

However, Beilein said he thought his team handled the intense national scrutiny well this season as a top-ranked team, and believes the experience will help the Wolverines during the tournament.

"This team has been, according to the pundits, a top-10 team. They’ve been playing to stay a top-ranked team, they’ve had that on them all year. They’ve carried that as well as anyone in the country has carried it," Beilein said. "I think we’ve been through this enough to where we will play to win."

Wolverines look to use Ohio loss as motivation

Last season, Michigan was in a fight with two other teams for a Big Ten regular-season title down to the final day. The Wolverines ended the Big Ten tournament on a disappointing note, losing in the semifinals to Ohio State. Then they were assigned a 4-seed and matched up with an extremely dangerous mid-major.

The similarities between last year’s and this year’s squads are tough to ignore, down to the seed. But Michigan will be working hard to make sure there isn’t one more striking similarity: its exit. Last season’s Wolverines lost to Ohio in a round of 64 upset. According to Burke, the wound from last year’s defeat is still fresh enough to use as motivation for this season’s tourney run.

"It motivates us. We know what it feels like, and that feeling hurts very bad, knowing how we ended last season. I think that’s something that will be in the back of our heads," Burke said. "Obviously not going in there trying not to lose. We know we don’t want to feel that way after a loss, we know we’re not trying to go home. We’re going to do what we need to do this week to get ready for South Dakota State."