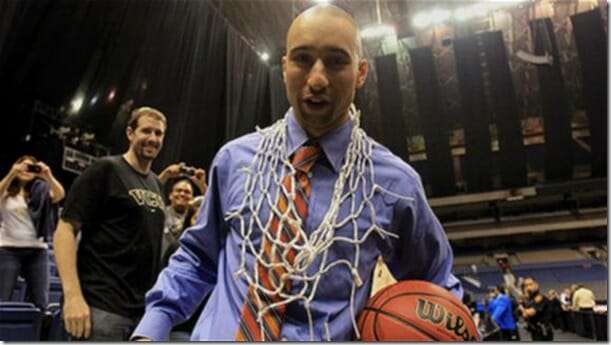 Michigan is back in the NCAA tournament and will open play as a No. 4 seed against No. 13 seeded South Dakota State on Thursday at 7:15 p.m (CBS) at the Palace of Auburn Hills. Here’s a first look at South Dakota State along with a run down of notes, reactions and more in regards to Thursday’s game.

A year ago most expected Michigan to be a No. 3 seed before the Wolverines drew a No. 4 and a match-up with a 13-seed that featured one of the best high usage guards in the country. A year later Michigan finds itself as a No. 4 seed once again and ready to face off against Nate Wolters and South Dakota State. Wolters isn’t DJ Cooper. He’s actually a better, more efficient offensive player.

South Dakota State played its way into the NCAA tournament by finishing the season on a high note. The Jackrabbits won 14 of their last 15 Summit League games including three tournament games to seal a bid. Overall the Jacks outscored Summit League competition by an impressive .19 points per possession in league games, the second best mark in the conference.

In many ways, South Dakota State is a similar team to Michigan. The Jacks high powered offense relies on low turnover numbers, lots of threes and not many offensive rebounds or free throws. Defensively, South Dakota State doesn’t foul and excels on the defensive glass but struggles to force misses or turnovers. Tempo wise, both teams are content to play right around 64 or 65 possessions.

The Jackrabbits have a marquee victory to hang their hats on, a 70-65 win at No. 3 seeded New Mexico. But their resume is also scattered with a number of losses. Losing at Alabama, Minnesota (without star guard Nate Wolters), Belmont and Murray State is explainable but losses at Hofstra (Kenpom 302) and Cal State Bakersfield (Kenpom 241) are head-scratchers.

The Jackrabbit attack is centered around 6-foot-4, 190 pound senior Nate Wolters. Wolters is a rare breed of player because he doesn’t just use a high percentage of SDSU’s offensive possessions, he’s also extremely efficient.

Michigan fans have a perfect reference point to judge Wolters’ efficiency. Among players that use at least 28 percent of their team’s offensive possessions, Wolters is one of two players in the country more efficient than Trey Burke.

While the level of competition in the Summit League clearly isn’t equal to the Big Ten, these are the sort of numbers that are rare at any level of college basketball.

Wolters is capable of putting up points in a hurry, including 53 points on 28 shots against IPFW. And while we’ll obviously focus on Wolters more in the coming days, his highlight reels are impressive:


There are few holes in Wolters’s game. He shoots well inside (55%) and outside (39%), he has a high assist rate and a low turnover rate, he gets to the free throw line, and even has the knack to pick up steals.

The 6-foot-4 guard is a difficult match-up for Michigan. The Wolverines don’t have a stereotypical lockdown defender or a natural fit. Trey Burke is certain to relish the challenge but he lacks size, and frankly energy, to guard a player of Wolters’ caliber for 40 minutes. Tim Hardaway Jr. could have the frame to give Wolters problems but he’s never been regarded as a great on-ball defender.

The Jackrabbits aren’t a particularly deep team, ranking 342nd in bench minutes nationally, but still have plenty of experience.

Dykstra is a prototypical pick-and-pop big man. The 6-foot-8, 235 pound power forward connects on 43% of his threes and 46% of his twos. Dykstra is also the best Jackrabbit defensive rebounder and despite his perimeter oriented game, he should have a size advantage over Glenn Robinson III.

6-foot-7, 220 pound Tony Fiegen anchors the middle. He’s the lone Jackrabbit starter that doesn’t shoot threes but is an able finisher inside (55%).

Brayden Carlson and Chad White serve as the primary wing shooters to play off of Wolters. Both players have attempted more threes than twos this season and connect at 36 and 43 percent clips respectively.

After last year’s 4-13 upset, Michigan isn’t going to do much talking about what lies ahead but the potential four-five match-up of Michigan against Virginia Commonwealth is mouthwatering. In just his fourth season at VCU, head coach Shaka Smart has already led the Rams to a Final Four..

VCU’s “Havoc” pressing style of defense is as advertised. The Rams force turnovers on 28.7% of their opponents possessions, that’s more than any team in the country. The intrigue comes from the fact that Michigan turns the ball over on just 14.3% of its offensive possession, better than any other team in the country.

If VCU and Michigan were to face off in the round of 32, it’s safe to bet that turnovers could tell the story.

One of our favorites, Sports Illustrated’s Luke Winn, broke down VCU’s havoc defense in depth earlier this week. Winn also wrote a VCU feature in the print magazine earlier this yaer and goes into as much detail as you could ask for into the 1-2-1-1 zone press.

Michigan has really only faced one true pressing defense this season in Arkansas. the Wolverines turned the ball over on 18.8% of their possessions in that one against an Arkansas team that forces turnovers on 24.6% of its opponents possessions (14th nationally).