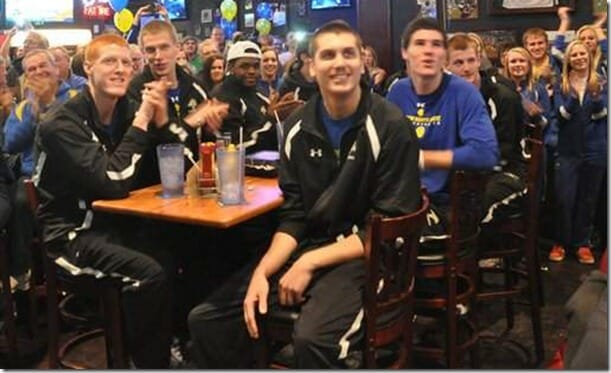 South Dakota State doesn’t know much about Michigan but showed its respect to the Wolverines when brackets were announced on Selection Sunday. Star guard Nate Wolters didn’t have much to share but was familiar with Michigan’s backcourt when offering up an immediate reaction to the Argus Leader:

Wolters continued that he’s impressed with what he’s seen of Trey Burke:

“He’s a good player. I’ve watched them a couple times. They’re really talented and have good guards,” Wolters said. “I think they like to get up and down a little bit, so it should be faster pace.”

“I think we match up pretty well against them,” SDSU junior forward Jordan Dykstra said. “Obviously, they’re more athletic than us, but we can shoot the ball as well and we have a pretty good point guard like they do.”

Head coach Scott Nagy emphasized that the Jackrabbits don’t want to slow the game down, when discussing the match-up with Matt Shepard on WDFN:

“We’re not going to slow the game down so Michigan can’t run. We don’t want to line up and let (Michigan) get five defenders in front of us all the time.”

“Offensively, we want the pace to be fast… We’re better when it’s fast. A lot of your best three’s come in transition. Our pace isn’t at Indiana’s but we want to run.”

Listen to Nagy’s full interview in the embedded player below:

Nagy said that Michigan runs an offense that’s similar to Kansas City (except with better personnel, of course). Why? Because usurped Roos coach Matt Brown is a disciple of Wolverines coach John Beilein from their time together at West Virginia.

Brown was fired last week but the Jacks were 8-2 in their last 10 games against UMKC.

Nagy added that he doesn’t expect his team to be overwhelmed after last year’s NCAA tournament experience:

“But it really bothered us and we wanted to get back. This time, we’ll be less overwhelmed. Does that mean we’ll win? We’re playing a great team, we understand that and we’ll have to play out of our minds. … We’re not intimidated. We’ve been in so many (big venues) and stuff before, I think that really helps.”

Senior forward Tony Fiegen was well aware of another dynamic that could be brewing at the Palace of Auburn Hills. Fiegen was hopeful that Michigan State fans would help support the Jackrabbits

“It’s an incredible atmosphere. I don’t think it will have a negative impact on us. Now, it could have a very positive impact on Michigan, giving them energy. We won’t be intimidated by that. The other thing for us is, I’m guessing, every Michigan State fan will be pulling for us.”

Michigan State plays the first game of the day, at 12:15 p.m., and tickets for that game are included in the session 1 ticket. Michigan’s opening game is part of the session 2 ticket while session 3 will feature Saturday’s round of 32 games. All-session ticket strips are also available.

The Jackrabbits were quiet on Twitter after the announcement with very few players even mentioning the draw. Head coach Scott Nagy kept his tweet simple:

Of course Michigan has been quiet on Twitter as well. Wolverine players haven’t tweeted since their February 27th loss at Penn State.

This isn’t Wolters discussing Michigan, but its a recent look at South Dakota State’s star player:

Wolters has also been profiled by Luke Winn, ESPN and his hometown St. Cloud Times this season.