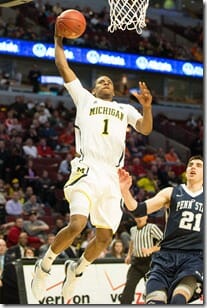 The internet was flooded with various previews, storylines and features about the upcoming NCAA tournament just hours after the brackets were released on Sunday evening. Trendy upset picks, overrated favorites and bracket projections are a fact of life in March and while there’s plenty of great material, at times it feels that the sheer volume is overwhelming. We scoured the internet to dig up some of the best national takes on Michigan and the NCAA tournament. (Photo: Dustin Johnston)

Best point guard in the country? Depends on what you like in a one. You want a ton of buckets and assists and shooting percentage points? Then go for Michigan’s Trey Burke (19.2 ppg, 6.2 apg, 40.1 percent on three-pointers). Prefer a tough defensive genius who can score when he has to, but doesn’t have to very often? Then Aaron Craft of Ohio State is your guy.

Those are the best two point guards in the country, and it doesn’t hurt that their coaches are nasty in the NCAA tournament format. Who wants to prepare for the symphony of offense that is the John Beilein system, and to do it in 36 hours? Nobody. So if the Wolverines can get some shooting from Nik Stauskas to go along with the mastery of Trey Burke and the genius of John Beilein, the Wolverines are going to get past a brutal, treacherous draw –South Dakota State, VCU, Kansas, Georgetown and Indiana — to play for the title.

Much more after the jump including upset picks, anti-upset picks, Final Four odds and more.

Luke Winn lists Michigan as one of five teams that he’s hesitant about but you might like:

Michigan (South No. 4): It has the best scoring point guard in the tourney in Trey Burke … but ranks 58th in defensive efficiency. As I wrote earlier this season: In the past 10 Final Fours, there have only been five teams ranked worse than 25th in defensive efficiency who made the Final Four — and only two of those teams were outside the top 50. Yes, the Wolverines’ powerful offense could get hot enough to win the whole thing, but the odds are heavily against them.

Winn goes on the thumb his nose at the trendy upset pick of SDSU over Michigan:

Upset I Don’t Like: No. 13 South Dakota State over No. 4 Michigan. Nate Wolters is a cult hero — I wrote an ode to his brilliance in November — and Wolters vs. Trey Burke should be quite the show. But Burke was shut down last year by a defensive-minded mid-major star (Ohio’s D.J. Cooper), and Wolters is far from a lockdown guy. Nor is his team. The Jackrabbits have the fourth-worst defense in the entire bracket, which doesn’t bode well for their ability to hold the Wolverines’ high-powered offense in check. A fun game to watch, no doubt, but it won’t be an upset.

Nate Silver, of Five Thirty Eight, models the tournament to come up with projections. He gives Michigan a 13% chance at a Final Four run.

Ken Pomeroy did a similar analysis based on his rankings:

CBS Sports names Michigan-South Dakota State one of the five “must see” games in the round of 64:

South Region: Michigan (4) vs. South Dakota State (13) Friday TBD. It’s an incredible matchup of two of the best point guards in the nation. You could make an argument Trey Burke is the best 1 in the land — and that Nate Wolters is the most vital PG to his team. The Jackrabbits played Baylor in last year’s tourney, come back older and better, generally speaking, with the ability to shoot the 3. Michigan has been stumbling as of late. SDSU is a hot team. This could become a trendy upset pick.

Michigan should get a needed boost by playing this game in Auburn Hills. They’ll have good crowd support. But South Dakota State has gone into Washington and New Mexico and won road games the past two years. So don’t assume too much.

“Trey does a great job of just staying humble,” Hardaway said. “Everything going on with his media stuff — cameras everywhere, reporters talking to him left and right, getting all in his head about if you want to stay or if you want to leave — he’s been humble through this whole process. He’s all about the team. That’s what makes him a great point guard and one of the best players in the country.”

One of Myron Medcalf’s ‘Ten Bold Predictions’ is that Michigan won’t reach the Sweet 16:

Michigan won’t reach the Sweet 16 — What a daunting path for the Wolverines. They open the NCAA tournament with a matchup against a dangerous South Dakota State squad that’s led by NBA prospect Nate Wolters. And then they have to go against a VCU team (assuming the Rams beat Akron) that forces turnovers on 28.7 percent of its opponents’ possessions (first in the nation, per Pomeroy). That’s a rough path for the Wolverines. Trey Burke is a very talented athlete. And he’s surrounded by young standouts. But that Michigan defense has been a concern all season. It’s going to be magnified as the Wolverines struggle in the opening weekend.

4. The Burke-Wolters showdown. Two of the best guards in the field will be on display in a 4-13 matchup between Michigan and South Dakota State in Auburn Hills., Mich., in the South region. Michigan’s Trey Burke may not guard South Dakota State’s Nate Wolters, but both teams lean heavily on those two to score and make plays. Don’t be surprised to see those two dominating the stat sheet in this game.

Dan Hanner is befuddled by the Wolverines:

The two most confusing teams in this table are Michigan and Kansas. Michigan clearly has NBA-level talent, and it isn’t that hard to talk yourself into believing in the Wolverines. But all of the Wolverines worst performances have come in their last 9 games. Michigan went from being nearly flawless to start Big Ten play, to quite beatable in recent games, and thus I’m still not completely comfortable with that pick. Conversely, Kansas has only had one bad game (against Baylor) in that same stretch of time and the Jayhawks appear to be peaking.

Michigan versus South Dakota State will likely be one of the most popular first round games for scout’s to take in, as it will feature two of the best point guards in college basketball—Trey Burke and Nate Wolters—going head to head. Wolters could really help his draft stock with a strong showing here. Whoever advances will have another outstanding test in a likely matchup with VCU and their defensive stalwart Briante Weber.