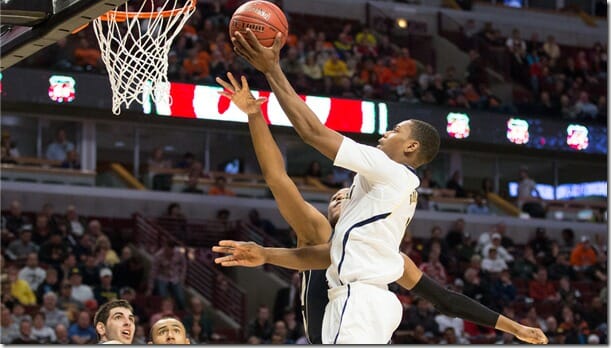 Going into the NCAA tournament, John Beilein and the rest of the Michigan coaching staff has good reason to be concerned with getting Glenn Robinson III open looks on the offensive end.

Robinson is an efficient, athletic difference-maker who can score from a variety of spots on the court, from the rim to beyond the arc. His involvement on the offensive end is integral to Michigan’s success — when Robinson scores in double figures, Michigan is 17-1. The problem? Robinson has scored 10 or more points in just one of the Wolverines’  past six contests and he’s made just one three point shot since February 6th.

“There are a lot of different ways that we try to get him in areas to score that aren’t necessarily plays but, as I’ve said before, residual action to put him in position,”  Beilein said during a press conference on Tuesday. “When he gets the offensive rebound, that’s a great way to do it. It depends a lot on match-ups.”

Often in the Big Ten, Robinson has been matched up with bigger and more experienced fours that cause him quite a bit of trouble on the defensive end. Robinson, though he is a strong, athletic player, is still only 6-foot-6 — and he’s still a freshman. As the competition got stiffer in conference play, Robinson’s role in the offense has steadily diminished. But with a whole new slate of teams in the NCAA tournament, Michigan fans could be looking forward to a resurgence from one of Michigan’s most exciting players.

If the Wolverines can get consistent production from Robinson, their chances of winning go up. It’s as simple as that.

Beilein mentioned that he’s aware of how much better Michigan is when Robinson is contributing, but added that many times that comes from playing great defense, as well

Whatever struggles Robinson has been going through as far as contributing offensively, they’re nothing compared to the funk Jordan Morgan currently finds himself in. Michigan’s starting five man, usually one of the team’s most reliable players when it comes to 2-point shooting percentage, has struggled mightily to convert even the simplest of layups over the past couple of games.

Not to over-analyze, but it started when the redshirt junior missed a tip-in to win the game in Michigan’s final regular-season match-up against Indiana. Since then, Morgan hasn’t been himself around the basket and has forced Beilein to cut down on his playing time; the Detroit native played only 10 and eight minutes in the past two contests, respectively, tallying four points on six shots and three turnovers.

Beilein said there are a few ways to get Morgan out of his current slump, but that Morgan’s injury he suffered during Michigan’s first game against Illinois probably has something to do with the way he’s been playing.

“There’s a couple things that we’ve done before (to help players get in a better mental state). Sometimes we put him on the scout team just to get reps even though we know they’re going to play. But the scout team never comes off the floor, to get him reps. Have him watch video. Just talk with them,” Beilein said. “Just get him to the point – because he’s an important part of, obviously, our defense, and we all know he’s a much better offensive player than he’s been since his injury. The injury probably has a lot to do with this. You lose that, you lose all those reps, a big thing to do with it. It would be really helpful if he plays at the level we’ve seen him play before in the NCAA tournament.”

While Beilein is confident Morgan will get his act together for the tournament, the coach said he will not hesitate to pull the big man if he is struggling to complete well-run offensive plays. If Morgan plays as he did against Penn State or Wisconsin, he’ll see a similar early benching.

“I’ve had a pretty short hook with him. In the first game (in Chicago) we were down 14-3 and he was in a funk, I stayed with him long enough. Now, everybody has to play well,” Beilein said. “If a guy misses a pass, then it’s one thing. A guy who’s had trouble with some things, you’re going to give him an opportunity. But you don’t want that to continue to recur – it’s not fair to the other guys. I’ve got confidence that Jordan is going to bounce back and really help us in this tournament, and obviously Thursday would be a good place to start.”

Beilein came before the media on Tuesday having finally gotten a look at Michigan’s opponent in the round of 64. While South Dakota State bears some similarities to Michigan, the Jackrabbits also remind Beilein of another team: the Ohio Bobcats of last season. The Bobcats obviously sent the Wolverines home early last season.

“It’s similar in that they have a commanding point guard like DJ Cooper. (Nate) Wolters is like that. [Ohio] did not have a four and a five who were shooters. [South Dakota State’s] four and five are shooters. That’s a different challenge, when they can spread you out,” Beilein said. “Many times, there’s nobody underneath the basket and there are five guys that we have to guard. That’s a challenge. There are some similarities.”

Defending South Dakota State’s myriad of shooters will be a challenge for Michigan’s defense, which has had trouble closing out on shooters in the past. The most recent, and perhaps the most glaring, example of this is the second-half “defense” the Wolverines played against Wisconsin, which allowed the Badgers to nail six 3-pointers in the second frame on their way to a victory. Keeping track of the Jackrabbit shooters will be paramount.

“That’s going to be a huge challenge. That’s a huge challenge when everyone can shoot in the lineup,” Beilein said. “(Jordan) Dykstra’s a really good shooter. (Tony Fiegen) in the championship game was just knocking down 17-footer after 17-footer. Not a 3-point shooter, but can really shoot the ball. That’s the challenge when you play a team that knows how to play together and have five perimeter guys. They’re going to get some open shots, there’s no doubt about that.