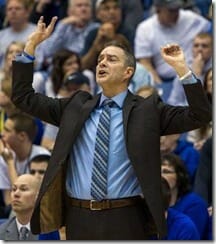 Terry Vandrovec is the South Dakota State beat reporter for the Argus Leader and he  agreed to answer a couple of questions about the Jackrabbits and Thursday’s upcoming NCAA tournament game. You can find his work at the paper, on his blog or on Twitter. Terry wouldn’t go as far as picking an upset but does think that the Jackrabbits have what it takes to give Michigan a fight.

I guess I have to ask about Nate Wolters first. His statistics are impressive and that’s coming from someone who has watched Trey Burke play all season. Does he have a weakness? Has he struggled against any certain match-ups this season?

Coming into the season, there were questions about Wolters’ jump shot and his defense. He answered the first by regaining the shooting percentage of his sophomore season; he’s addressed the second more sporadically. Still, Coach Scott Nagy has accepted the blame for that, claiming that Wolters is one of the best defenders in the conference. It’s just that he plays so many minutes and carries so much on the offense end that he sometimes opts to conserve energy on the defensive end. But he’s good for a couple steals-and-scores per game, and has a knack for sagging to get in passing lanes.

South Dakota State’s fatal flaw appears to be the same as Michigan’s: defense. The numbers (209th in defensive efficiency per Ken Pomeroy) should be enough to make Michigan (2nd in offensive efficiency) salivate. The numbers say that South Dakota State was a better defensive team overall last year but better in Summit League play this year. Statistics can only tell us so much though, from your eyes how good is this SDSU defense?

South Dakota State is a streaky defensive team. Many of its best defensive showings have come against good defensive teams. In other words, the Jacks can be influenced by the opponent, for better or for worse. They do lack beef in the post and that often requires an array of help schemes in that area, but they’ve gotten good at doing so. It helps that every regular in the rotation is at least 6-foot-4.

On paper, South Dakota State is most vulnerable against heavy posts. It’s just that not many teams have those anymore. Junior Brayden Carlson usually plays the role of lock-down defender; he’s 6-foot-4 with long arms and decent athleticism. Chad White has also come on in terms of one-on-one defending and freshman guard Jake Bittle is back from a hand injury, helping the defensive cause.

Nate Wolters and Trey Burke are going to get every headline but who is the x-factor for the Jackrabbits?

There are a couple ways to look at this. South Dakota State has a much better record when all-conference junior forward Jordan Dykstra scores in double figures compared to when he doesn’t. But – and this isn’t rocket science – the team is at its best when a third guy can score. The most consistent in doing that in the conference tourney was senior forward Tony Fiegen. He reached double figures in all three games and is more skilled and athletic than most teams realize.

With so many players returning from last year’s NCAA tournament squad, what’s the difference in this team? Does this group like more or less prepared to pull off a first round upset?

Only one key player isn’t back from last year’s team: grinder and shooter Griffan Callahan. The coaches worried early in the season about filling that toughness void, but that talk disappeared as time passed. Fiegen has developed a knack for doing dirty work and making hustle plays.

This team is more suited to pull an upset based on experience alone. D-I sports are still in their first decade in this state so last year’s tourney was a huge and foreign experience. This year, a berth was expected and the team was much looser in the 2013 conference final than in the 2012 version.

Down low, South Dakota State looks to be a great defensive rebounding team without much presence on the offensive glass. Who are the main threats down low and where are they most effective?

South Dakota State has only three guys you could consider post players: Fiegen, Dykstra and sixth man Marcus Heemstra. But all three like to shoot from 15 feet or more, and Dykstra is a major 3-point threat and a vastly improved rebounder. Heemstra is wiry and more of an energy guy. Fiegen is a true power forward who has had to play the five his whole career. His mix of grit and skill is irreplaceable. He cannot get in foul trouble if SDSU hopes to hang around.

A lot of the SDSU talk revolves around playing fast. Early in the season Michigan feasted on teams that sped games up but struggled a bit in the slower Big Ten conference. How has SDSU handled varying tempos and where is it most comfortable?

South Dakota State is by nature a team that likes to get out and go and/or shoot the 3. It has waged some epic battles with Oakland, another Summit squad that favors a fast pace. But the Jacks also fared well against a couple of Wisconsin types in their league – Western Illinois and North Dakota State. Both of those teams are in the top 10 in the country in scoring defense, while Western Illinois is last in pace of play.

For as much as it likes to play in transition, South Dakota State has shown an ability and willingness to be patient when an opponent stifles the tempo.

I’m not really a prediction guy. That said, no outcome would surprise me. The Jackrabbits have played some brilliant against enough power-conference types in the Wolters era. But it will have to shoot at a high percentage, particularly from deep.

Any injuries of note?

No injuries that I’m aware of. Bittle returned during the conference tournament after missing roughly 10 games due to a broken hand.