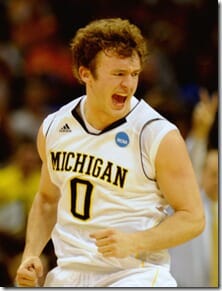 Three-time Michigan captain Zack Novak has kept in touch throughout the season, sharing his thoughts on the Wolverines as well as providing some updates on his career in the Netherlands. We figured it would be a good chance to catch up with Novak before the NCAA tournament whirlwind starts for Michigan. Zack shared his thoughts on the NCAA tournament format, Michigan’s youth and its defensive struggles of late.

Take me through a NCAA tournament week as a player. From Selection Sunday night, through the game prep, travel, the off day. What’s the hardest part? What’s the most exciting part?

I think it really just depends on the circumstances. There is definitely some extra excitement during Selection Sunday when you are on the bubble. After the selection process, everyone is scrambling trying to find out as much information as possible about whoever they are playing. Most of the time, the first time I would find information out about who we were playing was from the media conducting interviews after the selection show. From there until you leave for the game, you try to keep things as regular to your normal routine as possible in terms of preparing.

Once you arrive at the destination, things are anything but normal. We would always have a normal practice at a local university’s gym and then we would follow that up with the practice that was open to the public. You know it’s a pretty big deal when thousands of people show up to watch you do some shooting drills. After the open practice, you try to get back to normal prep again until game time. Thursday comes, you win the game, and you immediately have to start preparing for the next one. The two hardest things I would say are dealing with all of the distractions surrounding the event and keeping mentally sharp through all of the prep. You don’t know these teams as well as you know Big Ten teams, so you really have to focus on learning new players’ tendencies and the other teams’ strategies. The most exciting part is definitely actually playing the game. Playing an NCAA Tournament game is an entirely different experience than playing in any other game. It’s hard to even explain it, but there is just a unique feeling that you can’t find anywhere else.

Watching Michigan over the last month, what do you see as the primary reason for some of the defensive regression that we’ve seen?

I think J-Mo’s injury was a key factor. He knows where everyone needs to be and communicates instructions to the other guys. He is also great at guarding the ball screen because he is so athletic. I think the youth has also really shown on the defensive end. Most people grow up hearing “D-Up” and think that defense is all just smacking the floor running around like wild people. There is a learning curve in college that takes time for young guys to learn how to play solid team defense. Its just part of the deal when you play with such a young team.

You started a NCAA tournament game as a freshman, junior and senior. How did the experience change? How important is experience? Michigan is obviously a very young team, how do you see Michigan’s five freshmen reacting on the big stage?

I don’t think having “NCAA Tournament experience” is necessarily as important as having big game experience, which our guys have a ton of. There is a totally different feeling around the game, but once the ball goes up its still just basketball. These guys have played well in so many huge venues that I don’t expect the lights to really get to them. Also, finally getting out of the B1G is going to refresh them so much mentally. Just seeing new faces that don’t know every single little thing you are trying to do can make all the difference in the world. I think they will step up to the challenge.

A common refrain among analysts is that the style of basketball is vastly different in the NCAA tournament than Big Ten play. Obviously many of the officials are still the same but did you notice games called significantly differently in March versus January and February in Big Ten play?

I don’t necessarily remember how exactly the games were whistled, but I know the game is not as physical as a normal B1G contest. I know against Oklahoma, we had three starters in foul trouble in the first half. I think calling a tighter game will definitely benefit Michigan because they don’t foul and are so talented offensively. You know that in the NCAA you will get the best officials in the country, so you should have the only thing every player and coach wants: consistency.

Talk to me about Michigan’s tournament draw. Do you think South Dakota State is a good draw? Do you think Michigan would be able to handle VCU’s press if it gets that far?

I can’t say I got a chance to catch a ton of South Dakota State basketball this year. I watched some highlights of Nate Wolters though and I’m impressed just like everyone else is. It seems like they don’t really like defense much – plus. They aren’t going to try to slow the game down – plus. They are really good offensively and shoot the 3 really, really well from four positions – not a plus. 3 fg defense isn’t our strength, so we will really need to focus on limiting their open looks. This one has all of the makings of a shootout. In that sort of game, I like our odds quite a bit. I think UM wins 87-73. That brings us to VCU. John Beilein teams salivate at the chance to play a pressing team. It’s really hard to guard a team full court that has four ball handlers at pretty much all times. Don’t forget about the fact that this speeds the game up and gets our guys out in fast break situations. We have the best team in the country at not turning the ball over. We have the best point guard in the country. If anyone is equipped to handle the havoc, it’s Michigan.

How’s life going in Holland? Any updates on you and your team?

Life is good over here. We’re in a pretty good position to gain home court advantage for the playoffs coming up here in a month with only five league games left. We also reached the finals of the Dutch Cup, which is a side tournament with Dutch teams from every division playing in a huge bracket. We play Den Bosch this Sunday for the championship. They are the best team in the league, but we have played them close a few times. It’s the first time Landstede has been in the Cup final in a really long time, so people around here are excited. If we win, the team will qualify to play games throughout Europe next year. No one expects us to win the game, so we’re going to go out and play with nothing to lose and try to shock the (Dutch) world!

Side note, if anyone ever comes to the Netherlands doesn’t try a doner kebab with knoflooksaus then you are out of your mind. Best. Broodje. Ever.