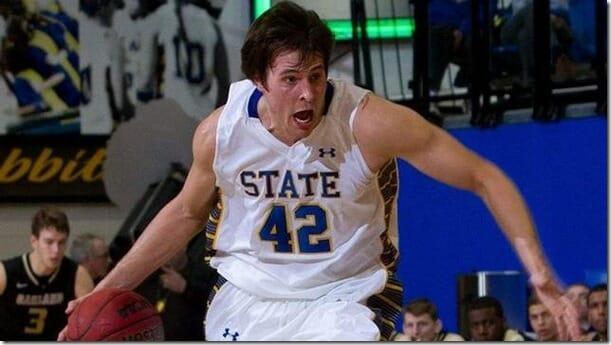 We plan to go a little more in depth in scouting South Dakota State beyond a simple preview because it’s the NCAA tournament and we have a couple days to spare. Here’s a player-by-player breakdown of of the Jackrabbit rotation as well as a closer look at their defense. All data fueled by Ken Pomeroy, Hoop-Math and Synergy Sports.

Wolters the complete package offensively. He scores, rebounds and hands out assists for the Jackrabbits and does everything with ruthless efficiency. While Wolters isn’t overly quick, he’s more than able at getting to the rim. One recent clip that stood out featured a nasty inside out dribble that left a defender frozen to enable a runner in the lane. For all intents and purposes, Wolters is the Trey Burke of the Summit League – or mid-major basketball. Obviously putting up Trey Burke numbers against the 16th best schedule in the country is different than putting up Trey Burke numbers against the 241st hardest schedule in the country. But the NCAA tournament teaches us year in and year out that talent rises to the top and Wolters is the type of star capable of stealing the show in March. Wolters isn’t a dominant defender but, again similar to Trey Burke, he has the knack for picking up timely steals and turning them into easy baskets.

The majority of the Jackrabbits’ second leading scorer’s production comes from post up plays (21%) or spot up jumpers (29%). His 43% three point shooting makes him more effective in the spot up game, 1 point per spot up possession, than posting up, .78 points per possession. But watching film it’s clear that he’s comfortable enough with either to exploit slower or smaller defenders depending on the situation. Michigan doesn’t have a great answer here and the best answer might lie in exploiting Dykstra on the other end of the floor.

The Synergy numbers paint Dykstra as South Dakota State’s worst defender, especially when defending spot up shooters and ISOs. Given his larger frame at the four position, Michigan is likely to look to get Glenn Robinson III some opportunities and force Dykstra to guard in space. If the Wolverines struggle with Dykstra defensively they may have to surrender any offensive advantage and go with Morgan at the four, McGary at the five.

Fiegen is the primary South Dakota State pick-and-roll man but he’s just as comfortable popping and knocking down 17-footers as he is rolling to the basket and finishing at the rim. Per Synergy Sports, on 50 pick-and-roll possessions Fiegen has popped 30 times, scoring 30 points and rolled or slipped the pick 20 times, scoring 33 points. Fiegen will force Michigan’s post defenders to show good discipline when defending the high ball screen – which SDSU utilizes on 16.3% of its half court possessions. Against Wisconsin, Michigan ran into trouble with Frank Kaminsky late as he started popping off of the high ball screen rather than rolling to the bucket. Despite his frame, Fiegen isn’t a great rebounder, he actually grabs a lower percentage of defensive rebounds than Wolters, and isn’t much of a shot blocking threat.

White is extremely efficient because he’s predominantly a jumpshooter. 41% of his offenisve possessions are spot up jumpers, 14% come in transition and 10.6% come off of screens. He’s actually more effective spotting up (1.17 PPP) and coming off of screens (1.52 PPP) in the halfcourt than shooting in transition (1.00 PPP). Per Hoop-Math, 69% of his field goal attempts are threes and 95% of his three point makes are assisted. Given that he shoots 43% on long range efforts, the best bet is not helping off of him as often as possible. If Wolters gets in the lane, you can bet that White will be perched behind the three point line waiting for a pass. Synergy’s metrics also tab White as the weakest link in the SDSU backcourt defensively but the difference is fairly minimal. Nik Stauskas has done a better job chasing shooters of late defensively and this strikes me as his natural match-up.

If White is the player that you can’t lose in the half court, Carlson is the player to keep tabs on in transition.  Carlson has a 70.3 eFG% in transition and just a 45.8 eFG% in the halfcourt. Carlson also shoots more threes than twos but he shows above average finishing ability in transition and cutting to the basket and isn’t afraid to go up through contact and go to the free throw line. Other than Wolters, Carlson is the next best perimeter defender on the Jackrabbit roster and seems like he would be likely to draw the Tim Hardaway Jr. match-up on that end of the floor.

Heemstra backs up the post and doesn’t play a major part of the Jackrabbit offense; he’s the only Jackrabbit reserve that has played in every game this season. When he does get involved offensively, he’s most effective posting up, cutting or rolling to the basket. Unlike Dykstra and Fiegen, he’s not a significant jump shooting threat. with just a 33% eFG% on jumpshots. He’s most effective around the basket (1.38 PPP) and in the post (.96 PPP).  Heemstra is also the best offensive rebounder and shot blocker for South Dakota State, but that’s not saying a lot as SDSU ranks 262nd in offensive rebounding and 307th in blocked shots.

The notable takeaways from this chart are that South Dakota State struggles to defend ball screen scorers, cutters to the basket and transition offense. Those weaknesses play right into the hand of a Michigan offense that has one of the most dynamic transition attacks and best ball screen scorers in the country.

South Dakota State players and coaches have told anyone that will listen that the Jackrabbits want to run with the Wolverines. Given that the South Dakota State offense and defense rank more favorably in half court situations than transition opportunities this seems like a move that plays directly into Michigan’s hands.

Not only is South Dakota State more effective in the half court, the Rabbits don’t have depth to spare and lean heavily on their five starters. Nate Wolters has sat for 2 minutes total over the last seven games, including a 50 minute night in a double overtime loss. Across the board South Dakota State does a good job of avoiding foul trouble but early fouls could cause coach Scott Nagy to dip further into his bench than he’s comfortable with early on.

Michigan’s defense is obviously a major question mark against South Dakota State but the Wolverines should be able to score the ball better than they have against Big Ten foes. Of course that puts a lot of pressure on an offense that hasn’t been nearly as consistent and proficient as it was earlier this season.