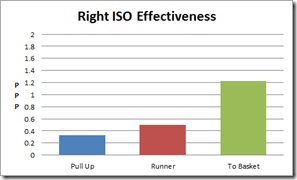 Trey Burke versus Nate Wolters is the sort of guard match up that jumps off the page. Two of the top four most efficient players in the country, head-to-head in a game where defense is something of a footnote on the statistical resume of both teams.

A comparison of routine statistics doesn’t do much to differentiate both players and emphasizes both players’ similarities. Burke averages a few more assists while Wolters is the better rebounder but after that the similarities are endless. Their 2-point, 3-point and effective field goal shooting percentages are all withing three percentage points. Steal percentage? Identical. Turnover rate? A tenth of a percentage difference.

Because both No. 3s are so similar statistically, we broke out Synergy Sports to examine both players’ offensive and defensive tendencies and abilities for a taste of what to expect on Thursday evening.

Both Wolters and Burke dominate the ball in their respective offenses. Burke uses 29% of Michigan’s offensive possessions, Wolters uses 30.3% of South Dakota State’s.

Both players love the pick-and-roll and thrive in transition but there are some differences in their games. The following radar charts plot the percentage of offensive possessions used in four major play types – pick and roll shots, isolation shots, transition shots and spot-up attempts – followed by the efficiency in each scenario.

The notable difference is that Wolters uses significantly more isolation possessions. Michigan rarely utilizes Burke in pure isolation situations, opting more often to use him in ball screen scenarios. To his credit, Wolters is very effective in isolation situations – much more than Burke – and gives head coach Scott Nagy the reason to call his number time and again.

While Wolters may be the better isolation player, Burke is the better transition player. You can see that Burke takes more shots in transition and converts more effectively but those numbers are magnified when including assists. The following chart compares points per possession plus assists for all offense, transition offense and half court offense.

Burke’s numbers in transition are lethal, especially his 6.1:1 assist to turnover ratio, and it becomes clear that Wolters isn’t nearly as effective in a full court scenario as Burke although he matches him in the half court.

Both players are great jump shooters. Burke has a 55% eFG% on jumpers compared to Wolters’ 57% eFG%. Both No. 3s are impressive shooters off the dribble, with Burke scoring 1.053 points per off the dribble shot (92nd percentile) and Wolters scoring 1.162 points per off the dribble shot (96th percentile). The jump shot is a major component for each players but Burke is slightly more reliant as 67% of his field goal attempts are jumpers compared to Wolters’s 55%. Here’s a look at the distribution and effectiveness of short jumpers, long twos and threes of each player.

Burke takes far more long jump twos than Wolters whereas Wolters usually manages to either step all the way behind the 3-point line or get to the rim. That could be because Burke has to play against the likes of Wisconsin and Michigan State over the course of the season but the difference is clear.

Because Wolters utilizes so many pure isolation sets, it felt like it would be worthwhile to examine his tendencies.

Wolters prefers to go left but is more effective going right. Sample size could be a concern but we are dealing with 137 isolation possessions which isn’t necessarily a small sample size.

Wolters is always effective when he gets all the way to the rim, averaging over 1.2 points per possession to both directions. But when going to the left he’s more comfortable with the pull-up compared to the runner when going to the right.

Burke is not nearly as ambidextrous in isolation situations, he’s much more effective driving to the left.

The key here is that Burke is able to get to the basket significantly more often when going to his left and of course he’s more effective when he gets to the rim.

Burke almost never uses his runner when going to the left (but he’s made both attempts) but he’s also significantly more effective with the pull-up jump shot when driving to the left.

Can either player stop their counterpart? Will they even guard each other? Those are probably questions burning holes in their coaches’ minds but the answer only adds to the intrigue for fans that want to watch a good game.

Neither team is great defensively and both teams need their star player to carry the offense for 40 minutes. While both players might be the most well equipped on their respective teams to stop the other, can they justify expending that much energy on the defensive end of the floor?

Burke is the better defender in pick-and-roll ball handler and isolation situations by a significant margin:

Conventional wisdom would say that both coaches would try to hide their best offensive players defensively by matching them with another complementary option. The trouble is neither coach has a defensive weapon in his arsenal particularly comfortable defending ball screens.

Burke and Wolters have both defended 91 possessions which ended in a ball screen this season. Michigan’s next options are Tim Hardaway Jr. (27) and Nik Stauskas (23) but neither player grades out more favorably than Burke. Brayden Carlson looks like a choice for Jackrabbit coach Scott Nagy. Carlson and seldom used reserve Jake Bittle grade out as the top SDSU ball screen defenders.

These are arguably the two best offensive guards going head-to-head in the NCAA tournament, it doesn’t get much better than that. Both players are complete offensive players that have the shooters and finishers surrounding them to truly enable their games.

Given the similarities of their numbers, almost across the board, the edge has to go to Burke because Michigan has played the far more strenuous schedule. However, both players are projected to be selected in the NBA Draft this year and will be ready to embrace the challenge of facing off head-to-head in front of countless NBA scouts.

Data via Synergy Sports and Ken Pomeroy. Kudos to Luke Winn for inspiration on the radar charts.