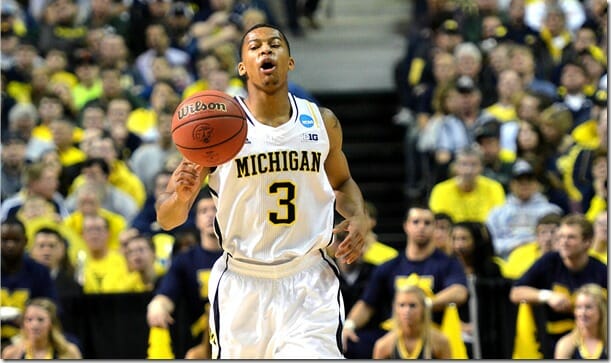 In a game that was billed as a battle of the most efficient point guards in college basketball, neither player hit the ground running. Michigan’s Trey Burke and South Dakota State’s Nate Wolters combined to score six points in the first half on dismal 2-of-15 shooting. After a close first half, the Wolverines were able to pull away in the second with a 71-56 victory.

Burke never rediscovered his jump shot, finishing 2-of-11 from the field but did add seven assists. Michigan was able to force Wolters to work for all of his offense while its other starts stepped up. Tim Hardaway Jr., Mitch McGary and Glenn Robinson III were 22-of-31 from the field and combined for 55 points. Hardaway hit four first half triples while Robinson scored 13 of Michigan’s first 15 second half points.

Michigan will advance to play the winner of VCU-Akron in the round of 32. Full post game coverage to follow from the Palace of Auburn Hills.