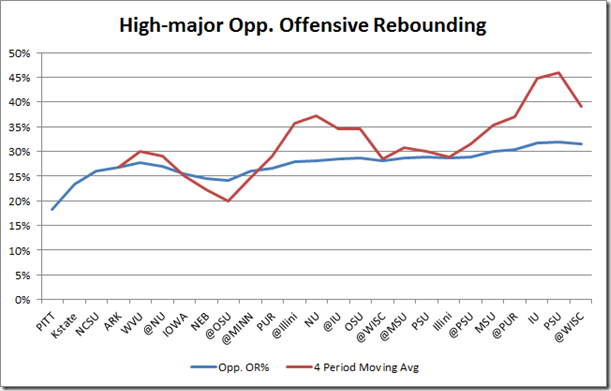 Michigan enters the opening round of the NCAA tournament with more questions than answers. The Wolverines clearly still have ability but look something of a shell of the team they once were. The free flowing transition play, bubbling confidence, defensive rebounding and nearly flawless offensive execution that was prevalent in November, December and January is a thing of the past. It’s clear that the wear and tear of the Big Ten has clearly taken its toll on a team that was once on its way to a special season.

But John Beilein isn’t ready to admit that Michigan is in a slump.

“I think we’re playing really well. I think we played Indiana as tough as anybody’s played Indiana and we could’ve easily won that game,” Michigan’s head coach explained on Sunday evening. “The tough loss we had was at Penn State. Every other loss that we had, we were probably playing a really good team and we didn’t play quite well enough but we played pretty well. ”

Michigan is 6-6 over its last 12 games. That’s a 6-6 record since the Wolverines traveled to Indiana with a 20-1 record, ranked No. 1 in the country on top of the basketball world. The Wolverines have been through it all over the last 12 games – gut wrenching losses, dismal blowouts and Houdini escaping acts – and it’s clear the emotional roller coaster has affected a young Michigan roster.

You can attempt to cherry pick one bad bounce against Indiana, Ben Brust’s three point shot, or an awful 10 minutes at Penn State but at the end of the day this is a Michigan team that hasn’t played nearly as well over the last 12 games.

The shift in performance has been dramatic. A comparison of Michigan’s first 13 games against high-major foes – in which Michigan went 12-1 – to its last final 12 is dramatic.

The strength of schedule was more difficult in the last 12 games but not by a significant degree. The average KenPom rank of Michigan’s first 13 high major opponents was 65, compared to 50 in its final 12 games. The difference in efficiency margin, .23, is massive as the Wolverines offense regressed by .13 points per trip and its defense regressed by .9 points per trip.

Almost all of the talk surrounding Michigan’s problems over the last month has surrounded the defense. The numbers above prove that the offense is almost as much to blame.

Michigan’s offense was so good in early season play that a couple blown defensive assignments were nothing to worry about. But watching Michigan’s offense regress from unparalleled to relatively human has caused the defensive woes to be magnified as well.

A major reason for that regression has been opponents ability to limit Michigan’s transition offense. The Wolverines were one of the most explosive transition teams in the country early on but those opportunities haven’t been as plentiful or efficient in recent weeks.

There’s not just one reason that Michigan’s defense has regressed. We’ve touched on poor ball screen defense, the lack of great perimeter quickness and seemingly everything else in between over the last few weeks. Defensive rebounding might be the most important regression as it affects not only the defense, but the offense.

On January 15th, Michigan ranked 2nd nationally in defensive rebounding percentage. Over the last two months the Wolverines have fallen to 75th and are just seventh best in the Big Ten.

If Michigan was one of the nation’s best defensive rebounding teams in November and December, it’s one of the worst in February and March. The Wolverine front line has been gouged on the offensive glass.

We’ve quoted Synergy Sports individual defensive numbers over the course of this season as an attempt to glean insight into one of the hardest elements of basketball to quantify: individual defense.

The point per defensive possession numbers assign credit, or blame, to an individual player for every shot and measure the points per possession that each player allows. We pulled the data again and split it between pre-January 15th data and post-January 15th – essentially the midway point of the season. Michigan’s schedule was certainly more stringent down the stretch, so some natural regression should be expected.

The differential column shows the improvement (positive) or regression (negative) in points per possession allowed.

Jordan Morgan’s defensive consistency and productivity is unrivaled on the Michigan roster. The numbers certainly justify his place on the All-Big Ten defensive team. Tim Hardaway Jr. and Mitch McGary both improved defensively in the second half of the season and I think that was clear from McGary’s play.

But it’s impossible to look at this chart without noticing Nik Stauskas’s regression defensively. In the first half of the season, the numbers painted Stauskas as a surprisingly effective defender that was targeted often. Down the stretch he’s been Michigan’s worst defender by a wide margin. While Stauskas has done a better job of sticking with shooters defensively in recent games, his problems seem to stem from understanding help side defense, ball watching and a simple lack of aggression.

The 6-foot-6 freshman is whistled for 0.9 fouls per 40 minutes. That’s fewer than any other player in Division I basketball. Michigan sends opponents to the free throw line less often than any other team in the country so low foul numbers shouldn’t be surprising. Robinson 1.4 FC/40 (24th), Burke 2.0 FC/40 (174th) and Hardaway 2.3 FC/40 (334th) all rank nationally in fewest fouls whistled per 40 minutes but none quite to the Stauskas extreme.

It all starts with defense. Michigan’s offense has actually regressed more significantly than its defense but given the poor defensive rebounding and fewer transition opportunities it feels like that’s a residual effect. The Wolverines’ once promising season could end with a couple bad bounces of the ball this weekend or they could regain their swagger that saw them win 20 of their first 21. At the end of the day, Michigan would be best served to go out running. Push the tempo and lean on what got it this far. Force a few turnovers, grab a few extra defensive rebounding and start to push the tempo and perhaps things fall back in place.