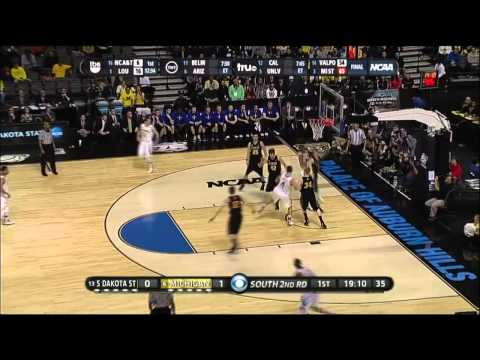 Michigan’s freshman big man received the start on Thursday in place of Jordan Morgan, and he played as if he was still trying to earn it. Mitch McGary did exactly what his coaches and Michigan fans have come to expect from him: he played with energy and fearlessness and showed flashes of real talent. If McGary can be consistent in what he brings to the table throughout this tournament (and stay out of foul trouble), watch out. The first play of the game set the tone for what South Dakota State’s objective was, defensively: stop Trey Burke. McGary sets an on-ball screen for his point guard and immediately Tony Fiegen, who’s matched up with McGary, leaves his man and blocks Burke’s drive. Burke recognizes and finds McGary rolling to the hoop. McGary needs to finish at the rim in that situation — the miss probably had something to do with going right — but he didn’t lack aggressiveness in a similar way the rest of the game. On Michigan’s next offensive possession, McGary shows what makes him so unique among Michigan’s options at the five spot. When Tim Hardaway Jr. puts up an errant two, McGary is in no position to get the rebound but somehow reaches into the air with one hand and grabs it. He then pulls it down, makes one strong step toward the basket, and throws down a two-handed dunk. Obviously brimming with confidence, the next play in the sequence shows McGary taking his defender off the dribble and sinking a baby hook with his left hand. The freshman scored Michigan first five points of the game, and if he continues to play as he did Thursday it will be tough to dislodge him from that starter’s spot.

2) Tim Hardaway Jr. hits 3-pointers when Michigan needs them most

It’s hard to overstate the impeccable timing of Tim Hardaway Jr.’s emergence from his late-season shooting slump. While Hardaway shot well in a losing effort against Wisconsin in the second round of the Big Ten tournament, in the three games before that match-up Michigan’s junior swingman was just 16-of-40 from the field. On Thursday, Hardaway came alive from behind the arc when Michigan was desperate. After an 11-0 run by South Dakota State and a six minute scoreless drought, Michigan found itself down 13-7 and in serious danger of needing a tough comeback  to survive the round of 64. At this point, Hardaway buried two crucial 3-pointers that kept Michigan always within a few points of the Jackrabbits. Hardaway hit his first triple at around the 11:30 mark in the first half, and South Dakota State answered with a three of its own. Hardaway quickly hit another shot from deep on Michigan’s next trip down. Without those two big makes, Michigan was looking at a nine-point deficit — thanks to Hardaway, the Wolverines were only down three. Hardaway found his looks off all sorts of first-half action, from inside-out with the post man to transition drop-offs to drive-and-kicks. The fact is, Michigan couldn’t get anything going offensively for a stretch and Hardaway bailed them out. By the end of the first half he’d hit four of his five 3-pointers for the game.

If Tim Hardaway Jr. owned the first half, Glenn Robinson III owned the second. When Michigan stepped on the court to begin the second frame, it held a four-point lead over South Dakota State. By the time Robinson was through dominating the first four minutes of the half, Michigan’s lead had ballooned to 11 and its talented freshman was looking as confident as he did in December. However, while it was Robinson finishing these plays, Trey Burke deserves credit for creating them. Burke had arguably his worst shooting game of the season on Thursday and went into the locker room at halftime with two points, no field goals and three assists. To Burke’s credit, he kicked off the second half with one objective: get to the lane, find his teammates. If you want to know why Robinson was so good in this game as opposed to most games against elite Big Ten teams, don’t look at the talent disparity — look at the way the Jackrabbits played Burke. Indiana, Michigan State and Ohio State didn’t help off Robinson or Nik Stauskas when Burke got into the paint. By contrast, the Jackrabbits utterly collapsed on Burke when he drove to the basket, leaving perimeter players, especially Robinson, wide open. Leaving a guy open on the wing when he’s only hit three threes over almost the last month seems like an okay plan but the freshman was able to knock down some huge shots to expand Michigan’s lead. His 21 points also surely gave Robinson confidence heading into the rest of the tournament, something he’ll need going up against VCU attacking defense.

About halfway through the second half, Trey Burke went up for a rebound and lost his balance as he collided with Jon Horford before crashing down hard onto the floor. The Michigan crowd at the Palace of Auburn Hills gasped and feared the worst.  Replays showed that Burke did not hit his head on the court – he fell hard on his back and elbow and his neck cranked back harrowingly – but he left the game with his status in question ad the Wolverines leading by just six points.

With Burke gone, the Wolverine supporting cast did what it had done all game: stepped up. Nik Stauskas took the lead, driving hard to the basket and making a tough layup with the foul. (It’s worth noting that Glenn Robinson III was technically the screener in the handoff to Stauskas). From there, it was more Tim Hardaway Jr. The basket looked like an ocean for the junior all night. On the second play of this sequence, Spike Albrecht drops the ball off to Hardaway before South Dakota State’s defense gets set and Hardaway pulls up for a long two. Later, with Burke back in the game, Hardaway nails another 3-pointer. Hardaway’s defender lost him drifting on the perimeter and ended up taken completely out of the play by a Mitch McGary screen, freeing Hardaway for the shot. By the end of the run, Michigan held a commanding 14-point lead that it would not surrender.

In this final sequence of baskets by Mitch McGary, we see the three main reasons McGary got the start over Jordan Morgan. While Morgan has contributed so much to this team over the years and it was tough to see him only log one minute in Michigan’s round of 64 match-up, he simply can’t do the things McGary does in this stretch. First, the freshman pulls up for a free-throw line jumper, evidence of a recently-expanded offensive game. McGary makes the turnaround from making those plays for the first time in practice to making them in games astoundingly quick. On the next play, Stauskas shows why he’s such an efficient ballhandler in pick-and-roll situations, finding McGary wide open under the basket after Tony Fiegen again helps off his man. McGary finished the play with an authoritative dunk. While there was a time Morgan could make this play in his sleep, these kinds of baskets are difficult for him right now. The third play is a trademark McGary steal. He is one of the best big men in the country when it comes to jumping passing lanes, and the result is a wide-open dunk. McGary was impressive on Thursday, and if he can keep this level of play going, Michigan has a good chance at a deep tournament run.