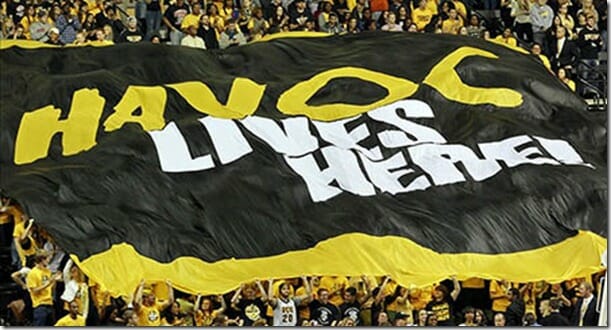 VCU’s vaunted full-court press attack and Michigan’s ability to break it will ultimately decide the outcome of Saturday’s round of 32 match-up between the Rams and Wolverines. It’s a contest between two directly opposed styles. Michigan is the best in the country at avoiding turnovers, VCU is the best at creating them; one team wreaks havoc, the other nullifies it.

John Beilein said timing has something to do with why preparing for the full-court press Smart’s team runs is so tricky.

“It reminds me of when we were playing the 1-3-1 zone a lot.  That used to be a very common.  And when we started running it, it was very uncommon, and I think it’s still uncommon again, but people really didn’t have that plan in place.  So I think that’s so unique,” Beilein said during a press conference on Friday. “It makes it so difficult for every team. I think teams in the A10 or NCAA got a little bit used to it and they at least had a couple days, but this, I think it really shows why they can be successful this time of the year, as they were last night.”

There isn’t much prep time, but the Michigan coaching staff is doing whatever it can to prepare the Wolverines to face what will undoubtedly be the most intense press defense they’ve seen all season. Part of that process is looking back at teams Michigan has played that, though their press isn’t quite as frenetic as VCU’s, can still give clues about how to handle it.

Arkansas is one of those quicker teams that utilized a full court press. Michigan handled the Razorbacks at home and has been watching film of that game to help prepare for a similar style of play.

“We watched some film on the Arkansas game this morning. Just staying confident and aggressive, those are the two biggest things,” Nik Stauskas said on Friday. “Teams like that, they kind of feed off guys who are scared with the ball. If you show you’re confident with the ball and take care of the ball, I think we’ll be fine.”

Taking care of the ball will be much easier said than done. With VCU likely denying Michigan’s primary ball handler — Trey Burke — access to the ball, other ball handlers will be called to step in. That means Nik Stauskas, Tim Hardaway Jr., as well as backup point guard Spike Albrecht, may see increased responsibility when it comes to bringing the all up court.

Michigan assistant coach LaVall Jordan said the key for the Wolverines will be playing at their own pace and not allowing VCU to dictate the action.

“Playing at your own pace is key. Sometimes that will be fast, and attacking. Sometimes it will be slow and poised, maintaining composure,” Jordan said. “Going when you want to go, and pulling back when you want to pull back is key. All five guys being connected. There’s no one-man press breaks.”

While breaking the press may pose some problems for a young Michigan team, if the Wolverines are able to get through, the pace will likely be something they welcome. The success of Michigan’s transition offense is well-documented. Michigan struggles on offense when teams take away transition opportunities, but if teams don’t get back on defense the Wolverines are experts at taking advantage.

The Rams press scheme will provide chances for Michigan to score on a defense that isn’t set. It will need to take advantage of those opportunities if it wants to move on to the Sweet Sixteen.

“When they start pressing we don’t want to just put our heads down and run. We want to use it to our advantage. If they’re going to press us really hard, and we break it, we don’t want to slow down afterward and run a play,” Stauskas said. “We want to just go right to the rim and get easy buckets. If we can get open threes and easy buckets in transition, we don’t have to run plays.

“We’re fine with that. That’s how we like to play.”

The Michigan player with the most responsibility when it comes to breaking the press will undoubtedly be Trey Burke. Burke’s measured, deliberate style has won Michigan games all season and his individual turnover rate of 12 percent is incredibly low for a point guard. Burke sees the challenge as not just getting to half court against VCU’s press, but taking advantage of it on the offensive end and pushing the pace the other way.

“I definitely think they’re going to deny me the ball at certain times. I think Nik and Spike, they’re ready,” Burke said. “As long as we’re not over-dribbling, as long as we’re playing smart, as long as we’re seeing where the pressure’s coming from and hitting the next man, then we should be able to have numbers on different occasions.”