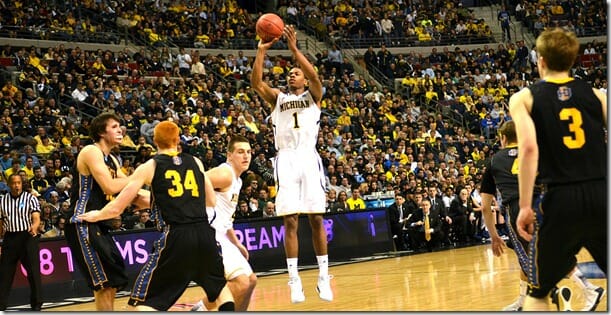 Nate Wolters didn’t wait long to show off a sampling of his offensive skillset in front of a pro-Michigan crowd at the Palace of Auburn Hills on Thursday evening. The 6-foot-4 senior crossed over Trey Burke and buried a long jumper over the likely National Player of the Year, giving South Dakota State an early 8-7 lead.

The Burke-Wolters matchup had been hyped and analyzed for much of the last week and for just a moment it looked as if the matchup was going to materialize.  But from that point on the oft-questioned Wolverine defense was able to slow down the star guard. Wolters would make just one of his final 11 field goal attempts over the next 35 minutes and Michigan would waltz to a 15-point NCAA tournament opening victory.

Michigan’s star guard wasn’t much better but he had more help. Trey Burke finished with just six points on 2-of-12 shooting (but did have seven assists) and left the game bruised and battered after a nasty fall in the second half but his teammates were up to the challenge. Tim Hardaway Jr. and Glenn Robinson III played their best offensive games in over a month, scoring 21 points apiece, while Mitch McGary seized the moment in a surprise start to finish with 13 points and nine rebounds.

Michigan had a dismal six minute scoreless stretch early in the first half that featured a lot of passing around the perimeter and not much else. But other than that the Wolverines scored the ball effectively against a weak Jackrabbit defense. The Wolverines scored 1.18 points per trip for the game and a superb 1.32 points per possession in the final 20 minutes. There was nothing secretive about Michigan’s strong performance offensively; the Wolverines simply hit a lot of open shots. Michigan made 54% of its twos and 45% of its threes an impressive 59% effective field goal percentage – its best shooting performance since its January 17th win at Minnesota.

Michigan only rebounded eight of its 27 missed shots for 11 second chance points and didn’t turn the ball over often or get to the free throw line much. However, the Wolverines were able to push the ball. The game as a whole wasn’t fast, at just 60 possessions, but the Wolverines manufactured some easy baskets. Despite botching some early lobs and transition opportunities in the first half, Michigan finished with eight fast break points and countless others in the secondary break.

The Wolverines were able to push the tempo because their defense was finally able to get some stops. For only the third time in the last 10 games, Michigan held its opposition below a point per possession. The Jackrabbits managed just .93 points per trip for the game and were never able to get Nate Wolters heated up. Michigan did a good job of defending the three and cleaning up the defensive glass but still had its fair share of defensive breakdowns. The Jackrabbits shot 58% on 2-point attempts for the game, a sign that there are still some issues with Michigan’s interior rotations.

Next up is a Saturday date with ‘Havoc’. VCU smacked a depleted Akron squad by 46 points on Thursday evening to setup a polarizing round of 32 match up. The Rams force more turnovers than any team in the country while Michigan turns the ball over less that any team in Division I. Saturday’s turnover battle is likely to determine who moves on to the Sweet 16. Tip off is scheduled for 12:15 p.m. (CBS) on Saturday afternoon at the Palace.