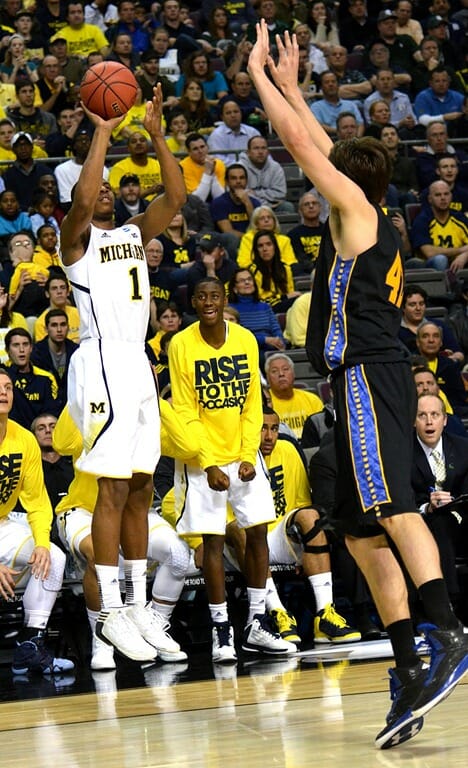 Throughout the first half of Michigan’s 71-56 defeat of South Dakota State on Thursday, Trey Burke simply did not look like the National Player of the Year candidate Michigan fans have watched all season. The Jackrabbits were shutting down the middle and Burke was seeing jumpers rim out left and right.

It was obvious Burke was pressing. Michigan’s point guard finished the first half with two points on a couple free throws, three assists and two turnovers. Michigan badly needed someone else to step up on offense.

Michigan’s talented freshman came out firing to start the second half of play, scoring Michigan’s first 11 points of the frame. Burke, for one, was impressed.

“He did a very phenomenal job of picking and choosing when the shots were there and he knocked down the open shots for us.  He played his tail off tonight,” Burke said after the game. “He crashed the boards when we missed and he got us a couple second opportunities to score. That’s Glenn Robinson at his best.  If he can play like that, which we know he can, then this team would be that much better.” (Photo: Bryan Fuller)

The praise from Burke is appropriate, seeing as it was obvious he was looking to pass after the first half he experienced. Burke knew his shot wasn’t falling, so he decided to take advantage of the way South Dakota State was defending — collapsing to the middle on drives.

Burke and Tim Hardaway Jr. did an excellent job of driving to the hoop and drawing defenders, which left Robinson wide open on the perimeter to knock down 3-pointers. He hit three of them within the first four minutes of the second half. The Indiana native finished with 21 points, the most points he’s had since playing Penn State on February 17th.

“(Burke) is a great point guard. He knows when he’s not shooting it well or anything like that, he can pass it,” Robinson said of his point guard’s ability to find him. “I definitely did (feel like that was my best game in two months). I had confidence and I was in the same kind of groove I was in earlier in the season. It just felt good. The ball felt great coming out of my hands. I’m just going to continue doing what I’ve been doing and help this team out any way I can.”

Much was made of the match-up between Trey Burke, the nation’s best point guard, and South Dakota State’s star point guard Nate Wolters. It didn’t exactly live up to the billing on Thursday. While Wolters was more effective scoring than Burke, Michigan held the senior relatively in check.

Wolters averaged over 22 points per game this season. Against Michigan, he scored 10 on 14 attempts.

“Well, we had a couple of things.  We wanted to quick hedge the ball screen a little quicker than we normally do to get back to the shooter, and then we also wanted to put Tim on him to get some length on him, and if we did switch any ball screens, then he could also be on [Jordan Dykstra],” Beilein said of the defensive effort on Wolters after the game. “Trey did a good job on him.  He’s a heck of a player.  A lot will be said about, you know, that Trey — that maybe Wolters guarded Trey very well.  Well, so did Trey guarding Nate.”

Wolters dished out six assists along with racking up three turnovers. It seemed as though Michigan’s length, especially with Tim Hardaway Jr. guarding him, frustrated him quite a bit.

Michigan assistant coach LaVall Jordan said it was a team-wide effort to contain Wolters, but that it did leave opportunities available to other South Dakota State players.

“It was a team defensive focus (on Wolters). Similar to what they did to Trey. There were ten eyes on him at all times, which left, I think, (Brayden) Carlson – he had a pretty big game (he scored 20 points). He stepped up. They’ve got a good team. We were telling guys afterward, we beat a really good team, and they might have beaten another team tonight the way they played, especially in the first half.”

Mitch McGary gets the start, makes the most of it

For the first time since Jordan Morgan returned from a mid-season ankle injury, Mitch McGary got the call to start Thursday’s game against South Dakota State.

“I think early this week Coach LaVall told me I’m going to start,” McGary said after the game. “So I just needed to come out with the energy I like to bring every game and pick the team up.”

Mission accomplished. McGary hit the ground running in his first NCAA tournament game, scoring Michigan’s first five points in the contest, including a put-back off a tough one-handed offensive rebound.

According to Beilein, the choice to start McGary had a lot to do with what he believes are lingering effects of Morgan’s ankle injury from earlier in the season.

“We’ve watched this very carefully and we’re very loyal to it.  Jordan’s giving to us a lot, but we thought in practice the last couple days, let’s just bring Jordan off the bench as needed and let’s get him a lot of reps in practice and see where he is,” Beilein said. “Jordan’s injury still has him in a bit of a funk. So we just said, we’re going to go with Mitch as number one, Jon as No. 2, and really I think it’s obvious to everyone what Mitch can bring to us at times, but don’t count Jordan out. He’ll be back.”

McGary is, characteristically, happy to be here.

“I had a blast, playing out there. Just to be playing in March is an honor. To play with this team is another honor. Just going out there and having fun and do what we do, it was great.”