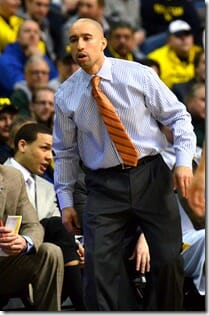 VCU had a full half of its round of 64 match-up against Akron to think about its next opponent on Thursday evening, given the game was pretty much over at the break. The Rams took a 25-point lead on the Zips and never looked back, winning in impressive fashion, 88-42.

VCU’s famed “havoc” defense is often described as a full-court press, but it is perhaps more accurately described as a blitz. The Rams are relentless and the stats show it: They force the highest percentage of turnovers and cause steals on a higher percentage of possessions than any team in the country. Smart’s game plan will hinge on forcing Michigan to be something its not: turnover prone. (Photo: Bryan Fuller)

“It would be great to get it out of (Trey Burke’s) hands, but we know he usually has it in his hands,” VCU sophomore Briante Weber said after his team’s win over Akron. “We just want to pressure him and make him see that he has four other guys checking him as well.”

His teammates echoed that sentiment, saying the press will be predicated on getting Michigan’s other players handling the ball.

“(Burke) is a great guard, probably one of the – if not the – best guards in the country,” senior Darius Theus said. “If we can try our best to disrupt him, get the ball out of his hands and get up, then hey, anything can happen.”

But while Trey Burke will be the focus, VCU also knows Michigan has other players who are capable of stepping up in big situations. After all, they sat in the stands as Glenn Robinson III and Mitch McGary stepped up when Burke struggled on Thursday.

VCU freshman Melvin Johnson acknowledged that Michigan has a bevy of talented players.

“That’s a great team. They have great freshmen. Glenn Robinson, Nik Stauskas, and Mitch McGary. But then on top of that, they’re led by two of the best guards in the nation in Tim Hardaway Jr. and Trey Burke,” Johnson said. “We’ve got our work cut out for us. They’re both crafty guards. One of them can shoot really well, and one can split the ball screens really well. We’re going to be prepared.”

Those great freshmen can be a valuable asset, as they were Thursday, or they can be a liability because of their lack of experience, as they have been at times this season. Against the cyclonic defense of VCU, it’s question that’s up in the air.

Rams assistant coach Will Wade, who had the scout for Michigan on Thursday, said he doesn’t see the freshmen as liabilities in this case.

“Their freshmen are really good players. You lick your chops when it’s not good players. When you’re playing Michigan and you play good players – those freshmen, by now, they’ve played 30-some odd games,” Wade said. “The kid from Canada, Stauskas, he’s obviously a good player. Robinson’s a good player. There’s a reason Michigan doesn’t turn the ball over. They’re number one in the country at protecting the ball – at turnovers per game and turnover percentage. There’s a reason they don’t do it: They’ve got good guards. We’ve got to do what we can and see if we can get the game going a little bit.”

Wade was effusive in his praise of what Michigan has accomplished so far this season.

“They’re really talented. I know Burke didn’t play as well tonight, but he’s the National Player of the Year, some folks have him. He’s really good. They pose a problem. Really good guard play. They’re tough down low. They pose some issues for us. They like to play small like we do, basically with one post and four guards, so we won’t have the quickness advantage we typically have on a lot of teams. They’re good. They can really shoot the three. We need to really contest shooters. It should be a good match-up.”

It will come down to a battle of wits between Michigan coach John Beilein and VCU coach Shaka Smart. Obsessive value of possessions vs. focused abandon and aggression.

Smart took the podium after his team’s dismantling of Akron and said he sees his team’s match-up against Michigan as a great opportunity for his program.