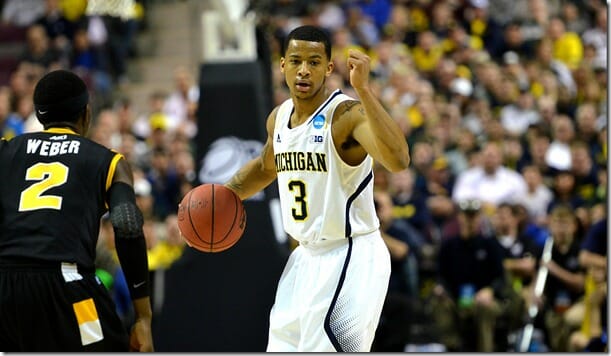 Bryan Fuller
It was clear that Michigan was unfazed by VCU’s vaunted ‘havoc’ defense from the opening tip off. The Wolverines scored on six of their first seven possessions and never looked back.

Havoc didn’t lead to giveaways – although Trey Burke had a season high seven turnovers – instead it yielded open shot after open shot for John Beilein’s Wolverines. Michigan’s defense held the Rams to just 23 first half points and its offense was able to extend a 15-point half time lead to a 78-53 victory.

VCU’s defense would make things difficult at times but Mitch McGary dominated the game. The Wolverines’ 6-foot-10, 250 pound freshman was a presence on both ends of the floor and finished with 21 points and 14 rebounds. McGary was joined in double figures by Trey Burke (18 points), Tim Hardaway Jr. (14) and Glenn Robinson III (14).

The win means that Michigan advances to the Sweet 16 at Cowboy Stadium where it will face the winner of Sunday’s Kansas-North Carolina game on Friday. Full post game coverage from the Palace of Auburn Hills to follow, post game discussion below.