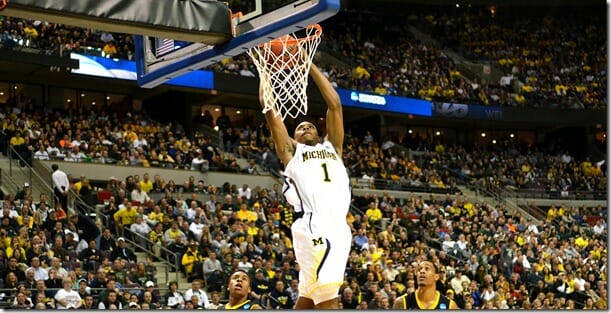 Michigan is headed to the Sweet 16.

Despite a long month of hard questions, doubts and frustration the Wolverines regained their form on the NCAA tournament’s grand stage at the Palace of Auburn Hills. Michigan breezed by South Dakota State and VCU by a combined 40 points to punch their ticket to Dallas.

The swagger is back and it couldn’t come at a better time for the Wolverines.

VCU might have had the stronger brand but Michigan left no doubt who had the better basketball team.

The Wolverines handled VCU’s vaunted ‘havoc’ full court press with ease and played their best game in over a month, if not the season. Michigan controlled the glass on both ends of the floor, exploited VCU’s pressure defense and shutdown a usually capable Ram offense.

Michigan’s offense excelled not because it handled VCU’s press but because it exploited it. The Wolverines turnover percentage, 19%, was slightly above their season average but well below VCU’s average forced turnover rate. However, Michigan made an impressive 63% of its two point attempts, most of which were easy layups and wide open shots due to VCU’s overextended defense, and picked apart the Ram defense. The Wolverines didn’t shoot the ball great from three point range – just 6-of-20 – but still finished with an impressive 57% effective field goal percentage.

This wasn’t a VCU-style game, it was a Michigan game. The game was played at a comfortable but brisk 65 possession pace and Michigan outscored the Rams in nearly every superlative category: 12-6 in second chance, 40-34 in the paint and most impressively 15-4 in fast break scoring.

The key to Michigan’s win was its dominance on the backboard at each end of the floor; something it hasn’t managed often in the last month. The Wolverines rebounded over 80% of VCU’s missed shots and over 40% of their own missed shots. Michigan imposed its will down low thanks to the emergence of Mitch McGary. The abundance of clean defensive rebounds also helped eliminate prime pressing opportunities for the Rams and helped generate secondary break opportunities for Michigan’s offense.

Michigan had ample defensive rebounding opportunities because it was finally able to buckle down and force some missed shots. VCU struggled with long range shooting, 3-of-16 (19%), and was slightly below average inside the arc at 47%. Overall Michigan held the Rams to a 42% effective field goal percentage and just .81 points per trip, their second worst offensive output of the season.

How good was Michigan’s defense? This was the Wolverines’ best per-possession defensive performance since December 20th against Eastern Michigan.

Next up is the Sweet 16 in Dallas, Texas where the Wolverines will face the winner of Kansas and North Carolina (Sunday, 5:15 p.m.). Anything less than the Sweet 16 would have felt like a massive disappointment for this team but now the Wolverine will head to Dallas within reach of one of their ultimate goals: win two games at Cowboy Stadium and advance to the Final Four.