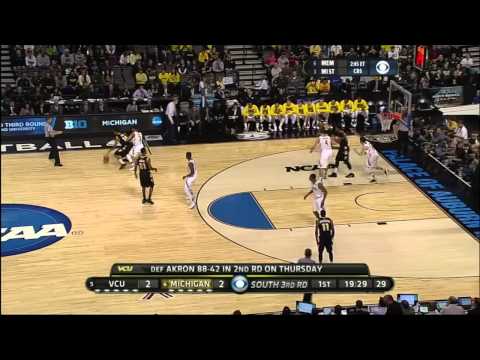 The first few minutes of this game were going to be key for both teams. If Michigan came out playing poorly at the start, as the Wolverines have been known to do at times, it would be bad news. If the VCU forced Michigan into some early turnovers resulting in easy basket, the Wolverines could have found themselves with a sizeable deficit before they had time to blink. This didn’t happen. Michigan came out of the locker room completely confident and chomping at the bit to play an uptempo style. Michigan owned the first three minutes and made six of its first seven shots of the game.

VCU kicked off its full-court press attack by going man-to-man and doubling Burke without putting a defender on the inbounder. Tim Hardaway Jr. is inbounding, which allows him to serve as the primary ball handler. Hardaway and Nik Stauskas execute a simply give-and-go, and Michigan is on its way. The best way to make high-pressure defense pay is with the back door cut. Stauskas executes a perfect back door by flashing to the wing before cutting and getting fouled at the rim. On the next play, Trey Burke, playing defense every bit as aggressive as VCU’s, pokes the ball away a la Keith Appling in Ann Arbor and glides in for the layup. On the next inbounds play, Michigan has Trey Burke inbound the ball, which puts a VCU defender on the inbounder but still has them in straight man-to-man. We have to highlight Hardaway here: the junior has taken quite a bit of flak for his ball handling this season, but he turned the ball over just once against the top turnover-causing team in the country on Saturday. As we see on this play, Hardaway did an excellent job protecting the ball with his body but more importantly he kept the pace slow and measured. VCU wants to speed ball handlers up with pressure defense and create the illusion of “havoc.” Continuing his hot start for the tournament, he takes this one himself and hits a long two. On the next offensive possession, Michigan keeps its foot on the gas with a great pass from Hardaway to Mitch McGary off the out-of-bounds play — McGary took advantage of VCU continuing to overplay and ended up with a dunk. We don’t have to go over every play in the sequence, but Michigan’s ability to handle the VCU press and exploit it with easy baskets set the tone for the game.

Michigan arrived at the 3:30 mark in this game having dominated the early action but had left more than a few points on the floor throughout the first half. Trey Burke had hit a 3-pointer with seven and a half minutes to play in the first frame to put the  Wolverines up nine, but since then Michigan had missed three 3-point attempts, and a tip-in attempt while committing two turnovers. Michigan’s defense had held up during that stretch, but VCU creates the feeling that it could go on a run at any moment. Luckily for the Wolverines, they found their offense just before halftime. On the first play, Tim Hardaway Jr. misses a floater in the lane but Mitch McGary uses excellent footwork to get around his man’s box-out and follows the shot or a tip-in with his off hand. Hardaway continues to feel it from deep when no one else is for Michigan, knocking down a huge three on the next offensive possession. Michigan gets out on the break after the ball gets tipped around off a VCU miss, with Burke leading and Glenn Robinson III and Hardaway filling the lanes. Robinson gets the nice look from Burke and finishes in traffic. After Burke goes to the line for two free throws, Mitch McGary absolutely levels Briante Weber on a screen, freeing up Burke for the long two. On Michigan’s final offensive play before halftime, Burke does what he’s done all season, creating an excellent scoring opportunity for Robinson. Burke completely crosses over Briante Weber at the 3-point line and drives. As he hits the paint, all five of VCU defenders are focused on him. Robinson sneaks behind Melvin Johnson on the baseline for the wide-open alley-oop. Michigan did whatever it wanted to VCU during this run and went into the locker room with a solid 38-23 lead.

3) Mitch McGary dominates early in the second half

After starting the game off in a state of controlled aggression, Michigan began the second half in the opposite fashion. The Wolverines looked timid with the ball and couldn’t get anything going. Their offense was abysmal for the first three and a half minutes of the second frame; Trey Burke turned the ball over three times and Nik Stauskas missed a layup, while VCU scored four points to cut the lead to 11. Then, Mitch McGary happened, and it was glorious. Michigan’s freshman big put it all together on Saturday, scoring 21 points and grabbing 14 rebounds in his best effort of the season. This stretch of the game saw him step up on the offensive end when his team needed him most. McGary starts things off by rebounding a missed three by Glenn Robinson III and cashing the put-back with his right hand (completely clearing out VCU’s Juvonte Reddic in the process). How many times have Michigan seen Trey Burke and McGary run this next play to perfection? Burke gets in between his defender and the basket, forcing the VCU’s bigs to come up and challenge him. Burke makes a perfect bounce pass to McGary, sneaking behind them. McGary finishes with the left and gets fouled. Burke makes those plays look easy, and McGary did a great job of finishing in traffic. That was a nice play, but the next one may be better. Check out the subtle fake Burke makes to Nik Stauskas to free McGary up for another baseline cut. He completely freezes Jared Guest, which gives him room to get McGary the ball and allow the big man to finish with authority. On the final play of McGary’s personal run, the freshman cleans up another Robinson miss and finishes. McGary was the difference for Michigan on Saturday, and if he keeps playing like this, he could be the difference in this tournament.

After this run, the game was effectively over. Against VCU, Michigan did what it did back in December: blitz teams with offensive runs until the Wolverines simply overwhelmed them. Michigan’s defense was good, but it didn’t have to be; its 1.2 points per possession scoring rate wore down the Rams from start to finish. In a span of 44 seconds, Michigan went from up 14, still a sizeable deficit, to up 23, a nearly insurmountable one. First, Spike Albrecht nails a 3-pointer thanks to excellent ball movement by Michigan — the Wolverines make four passes with just one dribble and the ball makes its way back to Albrecht, who drills it. On the next plat, McGary tips the ball out to Albrecht, who starts the fast break. Michigan’s backup point guard, with a defender on either side of him, makes a highlight-reel pass in between another two defenders to Glenn Robinson III, who aptly looks as though he’s dressed for a streetball game with a ripped jersey. Robinson finishes with the dunk and Albrecht gets the sensational assist. Robinson comes back down and makes a play defensively, knocking the ball out of a passing lane and later getting it to Burke on the other end for a 3-pointer. By the time Tim Hardaway Jr. hits his 3-pointer, VCU is all but buried and Michigan could start celebrating its first Sweet Sixteen berth since 1994.

And celebrate they did — in style. Tim Hardaway Jr. threw down a warm-up favorite, the two-handed reverse slam, as a way of punctuating Michigan’s impressive win over a team many thought was beginning to roll at the right time. Michigan completely dominated VCU in every aspect of the game and now it looks — somewhat unbelievably after Michigan’s so-so regular-season finish — like the Wolverines are peaking at the perfect time. On to Dallas.