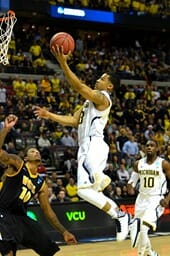 Trey Burke was named a finalist of the Naismith National Player of the Year Award on Sunday evening.

Burke is one of four finalists along with Indiana’s Victor Oladipo, Georgetown’s Otto Porter Jr. and Creighton’s Doug McDermott.

Fans can vote online for their Naismith Award choice among the four finalists as part of the award’s online component.

Burke is also a finalist for the John Wooden and Oscar Robertson player of the year honors. (Photo: Bryan Fuller)