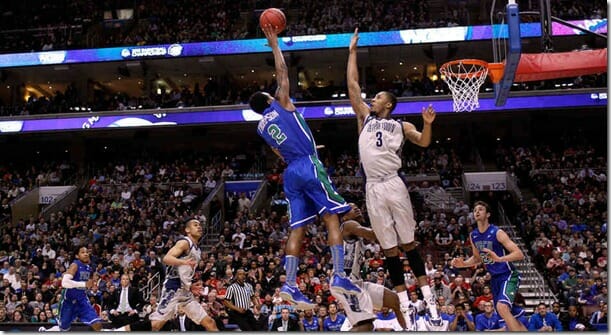 Michigan is headed to its first Sweet 16 since 1994 and the Wolverines will face No. 1 seeded Kansas.

The Wolverines and Jayhawks will tip off at 7:37 eastern time on Friday at Cowboys Stadium in Arlington, Texas.

While the sight of a top-ten defense might give Michigan fans nightmares of the Big Ten, there’s a big difference between Kansas and the stereotypical Big Ten team: pace. The Jayhawks average 67.7 possessions per game, more than any team in the Big Ten.

The Jayhawks handled the Big 12 this season and have a handful of quality wins; at Ohio State, Kansas State (three times), Oklahoma State, Iowa State (three times). Kansas has the ugly loss at TCU (worse than Michigan’s at Penn State) but other than a one week stretch in early February the Jayhawks are 31-2.

Jeff Withey has blocked 114 shots this year. As a team, Michigan has blocked 97. Similar to VCU-Michigan, this game will pit one of Michigan’s offensive strengths (2-point shooting) against a team that defends it as well as anyone.

Kansas leads the country in 2-point shooting percentage allowed at just 38.7% and ranks 3rd in block percentage, blocking 17.6% of its opponents’ attempts.

While Withey is a capable offensive player and will be a lot for Michigan to handle inside, the key will be figuring ways to score inside the arc against Withey and an always stout interior defense. One way the Wolverines might be able to accomplish this feat is by pushing the pace.

Kansas likes to run and that should play into Michigan’s hands.

The Jayhawks’ half court defense ranks in the 94th percentile compared to the 60th percentile in the full court. Kansas opponents score on nearly half of their full court possessions which should be music to the ears of a Michigan team that thrives in transition.

However, the Jayhawks do a great job of winning the transition battle before it happens. Kansas is very effective at generating its own transition opportunities, on 17.1% of its offensive possessions, while eliminating opportunities for its opponents, just 11.8% of their possessions.

Michigan can run off of clean defensive rebounds and forced turnovers. Despite the fact that the Wolverines don’t force many turnovers, the Jayhawks have been known to give the ball away from time to time. Kansas turns the ball over once every five trips up the floor and gave the ball away 39 times in 140 NCAA tournament possessions in its opening two games – a 28% turnover rate.

The Wolverines need to force some turnovers because the Jayhawks are a good offensive rebounding team. Both Wither and Kevin Young are threats to be reckoned with but Kansas has great athletes from the 1 through 5 positions.

The 1-3-1 zone threw a wrench into the Michigan-Kansas game two years ago, helping the Wolverines storm back and force overtime. While Michigan has rarely utilized the zone in 2013, John Beilein did throw it out there for a couple of possessions against VCU with a small wrinkle: Tim Hardaway Jr. running the baseline and Trey Burke on the wing. Will he utilize the zone against Kansas? I wouldn’t be surprised, especially out of a timeout or in attempts to change momentum.

Kansas starts four seniors; Withey, Elijah Johnson, Kevin Young and Travis Releford. Despite the experience, the Jayhawks lean on a freshman to do the bulk of the heavy lifting offensively.

Ben McLemore is a likely freshman All-American and uses the most offensive possessions on the Kansas roster and averages just shy of 16 points per game. The 6-foot-5 guard is efficient inside and out, making 56% of his twos and 43% of his threes.

McLemore has struggled over his last four games. He’s averaging just seven points per game in that stretch, shooting 20 percent from three point range and turning the ball over 13 times.

Despite his recent slow stretch, McLemore’s talent shouldn’t be underrated. Draft Express projects McLemore as the No. 2 pick in the 2013 NBA Draft and posted a detailed scouting report and video in late December:

Tim Hardaway Jr. is the likely Michigan player to draw the McLemore assignment as he has the prototypical size to guard the talented guard.

Michigan and Kansas have the shortest benches in the NCAA tournament. Both coaches give just 22% of available minutes to their backups. Naadir Tharpe and Perry Ellis are Self’s primary reserves. Tharpe is a 5-foot-11 guard that can distribute the ball but shoots more threes than twos and struggles to finish inside the arc (37%). Ellis, a freshman, is a former McDonald’s All-American and the 6-foot-8, 225 pound forward is a capable and athletic rebounder.

Given both teams’ preferences to utilize a short bench, fouls could prove critical. Mitch McGary or Jeff Withey getting into foul trouble for either squad could be a major setback and set the tone for the game. Both teams generally do a good of avoiding fouls but Kansas is the much better team at getting to the charity stripe; averaging 40 free throw attempts per 100 field goal attempts.

The other South matchup

No. 3 seeded Florida and No. 15 seeded Florida Gulf Coast will be facing off in the other South regional semifinal after Michigan and Kansas on Friday evening.

Florida has cruised through most of the season and is ranked 1st in Ken Pomeroy’s rankings. The Gators attempt a lot of threes (40% 3PA/FGA) but are a great shooting team and a great defensive team. Pundits point to the fact that the Gators haven’t won many (any) close games but that also means they have won 28 games with relative ease.

Florida Gulf Coast is ranked 97th or worse offensively and defensively by Ken Pomeroy but “Dunk City” has wowed fans across the country with alley-oop after alley-oop and will enter the Sweet 16 with little pressure and bundles of confidence.

While a fun and gun shoot out between Michigan and Florida Gulf Coast would be fun to watch, an every possession counts battle with Florida is more likely. The Gators have a handful of weapons including big man Patric Young (6-9, 249 lbs) down low, 6-foot-10 sharpshooter Erik Murphy and dynamic guards in Kenny Boynton and Mike Rosario.

In many ways, the Gators are a team built similar to Michigan. They love to shoot the three, play at a Big Ten-style pace, don’t foul much, crash the glass or get to the free throw line.