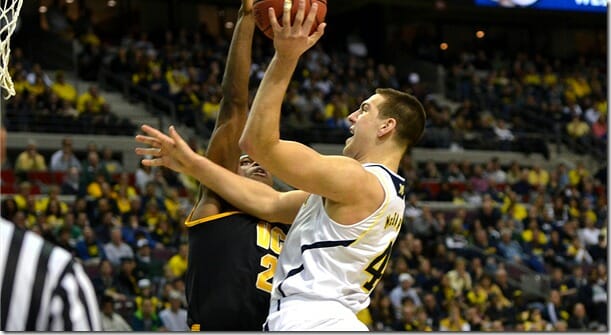 There’s no other way to put it: Mitch McGary had a career game on Saturday. Since taking over the starting job for Jordan Morgan at the beginning of the NCAA tournament, McGary has been awesome. His average over the past two games? 17 points and 11.5 rebounds. If he keeps that up, Michigan will be tough to beat. McGary was the difference-maker against VCU, as the Rams had no answer for him inside and he completely dominated the boards.

The ever-streaky Tim Hardaway Jr. is running hot, and it couldn’t come at a better time for Michigan. In his past two games, Hardway has as many made 3-pointers (8) as he totaled over the six games previous. Simply put, Hardaway is shooting like he was during Michigan’s toughest three-game stretch of the season: at Indiana, Ohio State at home and at Wisconsin. After that stretch Hardaway went cold but the junior is back on, scoring 21 and 14 points in Michigan’s past two games, respectively.

Robinson is no longer playing Big Ten teams and it feels so good. Gone are the days when teams would stay at home on him all game and not allow him cutting lanes to the basket while helping off Burke. Against South Dakota State, Robinson had a glut of scoring opportunities and made the most of them, scoring 21 points and making all three of his 3-point attempts. In Michigan’s round of 32 match-up against VCU, Robinson took advantage of the Rams overplaying him and wound up with a few highlight-reel dunks.

Michigan’s point guard had his worst scoring game of the season by a long shot against Michigan’s round of 64 opponent, South Dakota State. Against the Jackrabbits Burke had just six points, his lowest output of the season and the only time the sophomore has been held to single digits. Against VCU, Burke was much improved on the offensive end, scoring 18 points and dishing out seven assists. While he had seven turnovers along with that, being the primary ball handler against the rams comes with that sort of risk.

Michigan’s freshman sharpshooter isn’t shooting so sharp. Over the past two games Stauskas has been horribly off, making just one of his past eight long-range attempts. While that will need to change for Michigan to play to its potential, Stauskas has been helpful in other ways. The freshman did an excellent job handling the press against VCU and consistently makes good hard drives to the basket.

Michigan’s backup point guard only scored three points over Michigan’s first two games of the NCAA tournament, but the numbers don’t tell the whole story. Albrecht was huge in Michigan’s victory over VCU, spelling Burke as the primary ball handler. And when Albrecht was in the game, it’s not like he just tried to hold onto the ball; the freshman was aggressive and attacking, matching the Rams blow-for-blow. That he hit the only three he took and found Glenn Robinson III on a great pass for a slam didn’t hurt, either.

Horford played 14 minutes against South Dakota State, spelling Mitch McGary at the five. The redshirt sophomore grabbed four rebounds and scored two points and looked capable. However, he missed what should have been a dunked tip-in against VCU and played only five minutes in the game.

We haven’t seen Caris LeVert: Michigan State at home version for a few weeks now. LeVert was only the only Michigan guards who looked rattled against VCU and missed both his shot attempts in each of Michigan’s first NCAA tournament games.