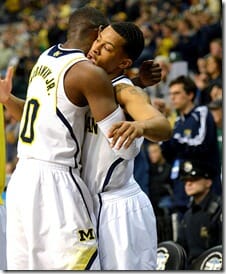 When the NCAA tournament brackets were released just over a week ago, many had Michigan as a trendy upset pick and VCU as a trendy underdog Final Four team. Michigan handled South Dakota State and VCU by a combined 40 points as it cruised through its opening round games into the Sweet 16.

Michigan, 10-1 all time in the Sweet 16, has gone from an oft-questioned high seeded team to a trendy pick in the tournament’s second weekend. Here’s a run down of what national writers are saying about Michigan’s matchup with Kansas and the Wolverines’ chances of making a Final Four run. (Photo: Bryan Fuller)

Andy Staples at Sports Illustrated asks whether Michigan can continue its impressive play, calls Kansas-Michigan the matchup of the regional and picks Michigan to win the region.

Can Michigan duplicate its sterling first-weekend performance? With the exception of an off day for Burke in the round of 64, the Wolverines clicked in just about every way in Auburn Hills. Glenn Robinson III and Tim Hardaway Jr. each averaged 17.5 points. Burke distributed and defended well. The Wolverines found a new weapon in freshman center Mitch McGary, who joined the starting lineup for the South Dakota State game and dominated on the glass and in parts of the game that don’t show up in the box score. Michigan hasn’t always been able to make all these pieces work together seamlessly in the same game. It will have to do it for a third consecutive time to beat Kansas and advance to the Elite Eight.

More from CBS, ESPN, Nate Silver and Ken Pomeroy after the jump.

Michigan coaches and players made the radio rounds as well (podcasts linked). John Beilein was on WTKA and Mike and Mike while Mitch McGary was on WDFN, Tim Hardaway Jr. was on Jim Rome and Nik Stauskas was on TSN Radio in Canada.

Michigan’s NBA sons were also featured on this video released by the NCAA.

Myron Medcalf reseeds the 16 teams remaining in the tournament at ESPN and slots Michigan as the second best team.

2. Michigan (1-seed; was No. 4 in the South): After Michigan’s quick departure from the Big Ten tournament, there were some concerns about the Wolverines’ postseason potential. Those concerns were magnified on Selection Sunday, when they were paired with dangerous mid-major South Dakota State and placed on a collision course with VCU. But Michigan had few problems with either. The Wolverines held Nate Wolters to 10 points (3-for-14) in a double-digit win, and they scored 78 points and committed just 12 turnovers in a 25-point victory over VCU’s “Havoc” attack.

CBS also reseeded the tournament and put Michigan at No. 5 overall.

Jeff Goodman notes at CBS that an All-Big Ten Final Four is still a possibility and calls Michigan the most impressive team of the opening weekend:

Most impressive: Michigan. The nation’s best point guard, Trey Burke, struggled in a win over South Dakota State and also had seven turnovers against VCU. However, John Beilein’s team pulled away from Nate Wolters and the Jackrabbits and then pummeled Shaka Smart and VCU. Freshman Mitch McGary was dominant against VCU and Tim Hardaway Jr. did a nice job handling the Rams’ pressure.

He shocked many in the recruiting world when he chose to play for Michigan over Duke, and he heard plenty of skepticism regarding his decision. Then McGary got off to a slow start this season and was ineffective due to his poor conditioning. McGary said he was all the way up to 273 pounds at one point because of poor eating habits.

“He couldn’t play more than a couple minutes without being winded,” Hardaway Jr. said.

“He never could have done what he did today,” added Burke.

McGary logged a career-high 34 minutes and couldn’t be seen huffing and puffing at any point, even after he hurled his body to the floor with 2:37 left and the Wolverines in front by 28 points. He gave the Michigan Wolverines that dimension they have lacked all season, a relentless enforcer who will stand toe-to-toe with any big man in the country.

Make no mistake: A reliable McGary gives Michigan a complete roster, and while that roster is very young, it is also capable of wining a national title.

Reliable is the key word, though. While Saturday afternoon felt like a revelation for Michigan in that their talented recruit made a giant leap forward, let’s remember that the matchup was quite favorable. VCU is very good and was coming off a blowout win over Akron, but Michigan presented a poor matchup because, led by Trey Burke, it had the personnel at guard to give VCU’s aggressive, undersized defense trouble. To his credit, McGary took advantage and took care of the rest.

Nate Silver notes that Michigan’s championship hopes are up to 3.8 percent from 2.5 percent.

Michigan (up to 3.8 percent from 2.5 percent) Michigan could easily enough have been a No. 1 seed had it played better down the stretch, and it was probably underseeded as a No. 4 even with the losses that it took. In general, however, we’ve found that late-season performance doesn’t tell you that much more than early-season performance when it comes to tournament play – and Michigan’s slump has not extended into the postseason. It was a break for the Wolverines to play in Auburn Hills, Mich., but their domination of a tough Virginia Commonwealth team on Saturday was nevertheless impressive, and they should be thought of as the equivalent of a strong No. 2 seed right now.

Ken Pomeroy has Michigan with slightly better odds than Kansas in his updated log5 predictions: