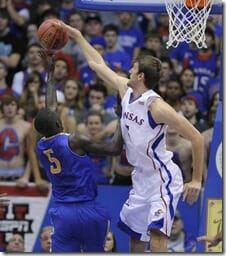 Two words ought to inspire trepidation in the heart of any player driving to the basket: Jeff Withey.

Kansas’s senior center is the defensive stopper for the Jayhawks, the last line in a defense that often doesn’t allow opposing offenses to get that far. But when they do, when an opposing player reaches the rim, he has Withey to deal with. And it’s no picnic.

Withey has blocked 141 shots this season and holds the Kansas and Big 12 records for blocks in a season and for his career. His shot blocking ability was on full display in the opening rounds of the NCAA tournament as he accumulated 12 blocks total in wins over Western Kentucky and North Carolina.

However, while Withey is the headline-grabbing shot-blocker, the Jayhawks play great defense as a team. They are ranked fifth nationally in adjusted defensive efficiency by Ken Pomeroy and hold opposing teams to 39 percent 2-point shooting, the best in the country.

"Withey, obviously – that’s a big part of defensive field goal percentage, the blocked shots are still missed shots," John Beilein said during a press conference on Tuesday. "Withey anchors it around the basket, but the other guys, when you play for Bill Self, you learn to really play defense. And when you’ve been doing it for four years, you’re usually really good at it."

Beilein highlighted a major factor in Kansas’s defensive success: experience. When Michigan plays Kansas, it will be starting three freshmen. Kansas will be starting four seniors. Not only that, the Jayhawk seniors all possess serious NCAA tournament experience.

So, while the most obvious strategy that comes to mind against a team that defends the basket so well is to extend the defense by hitting 3-pointers, the experience of the Kansas guards has led them to terrific defense against long-range shots. The Jayhawks allow opponents to shoot just 30 percent from beyond the arc.

For Beilein, the key is hitting open shots — when you can get them.

"They defend both (against twos and threes), the threes are at 30 percent as well. In games like this, and this is pretty constant whenever you play really good defensive teams – you’re going to get some open shots," Beilein said. "It’s important that you’re able to make those. You can’t be missing layups, you can’t be missing a wide-open three too often. You have to nail those because you’re also going to get some tough twos."

Mitch McGary will be critical

While Jeff Withey will be a challenge for the Wolverines inside, it appears Michigan has a fighting chance with the emergence of its freshman center Mitch McGary. McGary had a solid game against South Dakota State and then busted out for a career game against VCU, scoring 21 points and grabbing 14 rebounds.

McGary isn’t quite as tall as Withey, but the athletic big has the bulk necessary to force Kansas’s center out of the lane and perhaps clear the way for some of Michigan’s guards, as well as space to collect rebounds.

Beilein said McGary’s ascendance is thanks to the fact that the freshman is now injury-free, which has enabled him to improve his conditioning.

"I think it has a lot to do with his conditioning right now. He’s 256 pounds, which is probably a pretty good weight for him," Beilein said. "He’s really just been injury-free. He came in with a leg problem and it’s worked itself out. That’s a big thing: his conditioning is much better than it has been in a long time."

McGary was able to exploit VCU’s lack of size in last week’s round of 32 match-up. Playing against a player like Withey, who possesses both size and experience, will pose much different problems.

One of the most pressing concerns for Beilein is whether or not McGary will be able to stay out of foul trouble against Kansas’s talented big man.

"The biggest thing that has plagued any of our big men is foul trouble. Mitch has learned a great deal about that," Beilein said.  "I think the eight minutes at Indiana was a bit of a serious wake-up call to say, ‘playing hard does not always mean playing smart.’ He had one of those fouls in the South Dakota State game that put them in the one-and-one a little bit earlier. He’s learning about how this not only hurts his playing time, it hurts his team. Guarding Withey, who is one of the best big men in the country, is a whole new challenge."

The weekend Michigan reached its first Sweet Sixteen since 1994, John Beilein was intent on celebrating the momentous occasion. At least, he gave it his best shot.

"I don’t do it well," Beilein said. "I really don’t. I’m thinking about the next game."

Still, Michigan’s coach was able to celebrate with his family over chicken wings and pizza, a party that he described as "crazy," and a "knock-down, drag-out party." While Beilein may have had trouble keeping his mind on the festivities, he encouraged his players to enjoy the process and have fun with it.

"We wanted them to enjoy this thing," Beilein said. "We took Sunday off and they just had rehab. We said, ‘don’t go hide in your room and get on your phone. Go and see people and have a good time.’ Right now, I think, given the year, it’s not too much distraction at this point."