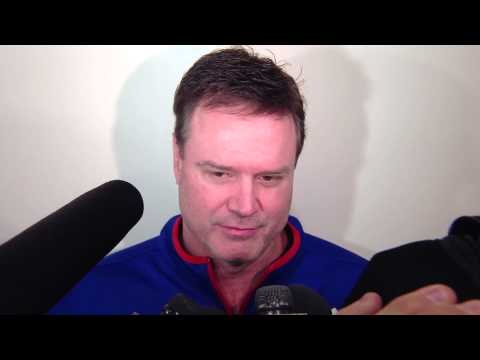 Kansas took a day off after its NCAA tournament round of 32 victory before diving into its preparation for Michigan. Michigan took a similar approach but was gifted an extra day of prep time by the NCAA tournament schedule which saw the Wolverines play Saturday instead of Sunday.

After taking Monday off, Kansas had yet to practice or scout the Wolverines before it met with the media on Tuesday afternoon. Bill Self and Travis Releford both faced the media to discuss the matchup and the upcoming trip to Dallas. While most of their remarks can be found in the embedded video above, we’ve also compiled a rundown of highlighted quotes from Self, Releford and other Kansas players about Friday’s upcoming game.

Self’s scouting report of the Wolverines was fairly spot on:

“They stretch you at four spots, they have arguably the best player in the country, an unbelievable backcourt, they are extremely well coached and well drilled. They only average nine turnovers per game, which is the best in the country, and they don’t beat themselves. When they’re playing well they are as good as anybody in the country. But on the flip side when we play well we can play as well as anybody. It should be a heck of a game without question.”

Self wasn’t ready to admit that he would use the prominent discussion of Michigan in the national media as a motivational tool for his team.

“I guess we can use it but I don’t think there’s really that type of motivation that we need to use to get our guys ready. But I hope everybody is talking about Michigan, that’s fine with me. We’re still a No. 1 seed and we need to play like a 1-seed – we haven’t done that yet – but they’re very capable of being a 1-seed. Two weeks ago or three weeks ago they were on the 1-seed line and there’s not a nickel’s worth of difference between our two teams. Whoever players better on Friday will win.”

“Mitch is playing great. I think he is a great screener, he does some intangible things. He probably goes after the ball as hard as anyone we’ve played all year. He’s an unbelievable loose ball guy and he does some intangible things that as a coach you’re just so happy you have that on your team. As an opponent you have to somehow try to negate that.”

Self also told the Kansas City Star that he was impressed with Michigan’s talent:

“We’re playing a team that just demolished an unbelievable basketball team in VCU,” Kansas coach Bill Self said. “Michigan is talented as anybody. When they play good, they’re definitely a top-five team in the country. And they’re playing good right now.”

Travis Releford shut down North Carolina’s Reggie Bullock last week and could be a thorn in Michigan’s side defensively. Kansas hadn’t watched film of Michigan yet when he addressed the media but he gave a quick scouting report from what he’d seen on TV:

“They’re small, they can shoot it and they’ve got a really great point guard,” Releford explained. “But like I said we haven’t broke down the scouting report yet.”

That was more than other Jayhawks offered on Sunday night after their round of 32 victory, most were content to call Michigan a ‘great team’:

“Michigan’s a great team, like North Carolina is a great team,” said freshman Perry Ellis, who scored three points with two boards in eight minutes. “It will be fun playing in the Sweet 16 for sure.”

Much of the talk during Kansas’ media availability surrounded the Jayhawks slow starts. The Jayhawks have been outscored or tied after the first 10 minutes in their last five games: 14-9 vs. North Carolina, 14-14 against Western Kentucky, 11-10 against Kansas State, 13-13 against Iowa State. Kansas also trailed at halftime – 30-21 vs. UNC and 31-30 vs. Western Kentucky – in both of its NCAA tournament games.

“Just slow starts, we come out I think not prepared and ready to play and the second half we have a talk and we get it together,” Travis Releford remarked when attempting to explain the slow Jayhawk starts. “We know if we want to win the game then we have to come out and play a lot better.”

When a reporter joked that perhaps the Jayhawks should have a talk before games, Releford agreed.

“We do that too but obviously, that one doesn’t work as much as the half time talk. We definitely need to come out from the jump and be ready to play.”

Bill Self was unimpressed by the questions regarding slow starts.

“Well part of the strategy this time is going to be to tell our guys to actually try to make shots, rather than just throw it up there,” Self quipped. “I think the first two games we did get off to shaky starts without question … but we have a little momentum and they guys got some confidence from that. I do think there’s a little extra pressure being a 1-seed and playing in your backyard – sometimes you play not to lose rather than embrace the moment.