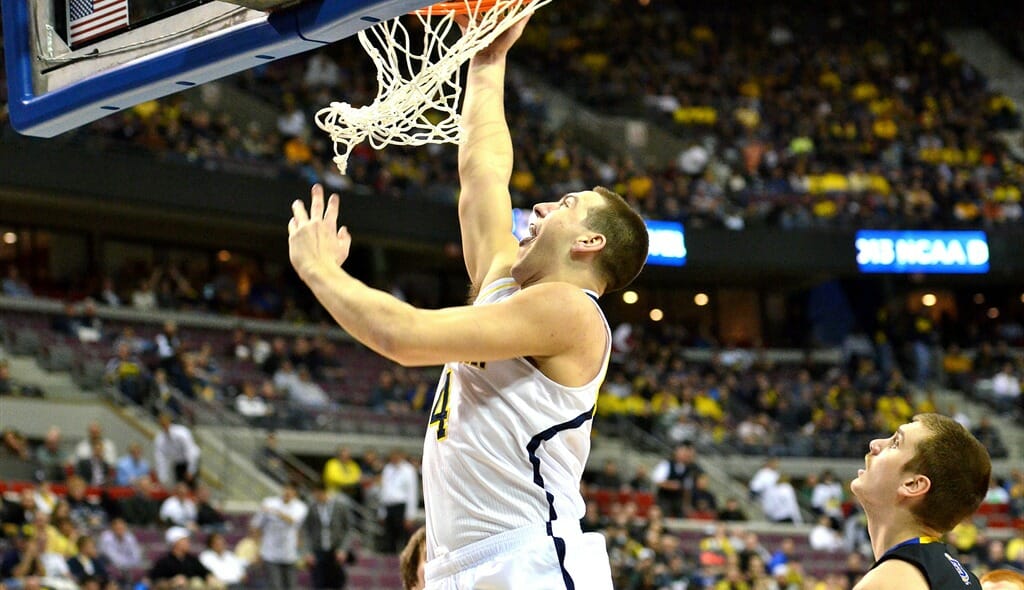 It’s been addressed exhaustively throughout the week leading up to Michigan’s Sweet Sixteen meeting with Kansas on Friday evening: the battle between Mitch McGary and Kansas senior center Jeff Withey.

Withey is an experienced seven-footer and arguably the best shot blocker in the country. McGary is a frenetic, 6-foot-11 freshman energy man that enters the Sweet Sixteen after playing the best games of his career in the NCAA tournament. While no individual matchup determines a game entirely, the battle at the five position will undoubtedly influence who prevails on Friday night at Cowboys Stadium.

One of the Michigan coaching staff’s chief concerns regarding Withey is his ability to protect the rim. The key will be pulling Withey outside of his comfort zone, the low post.

“I think for us, tomorrow, we want to make sure he’s moving around a lot, so he doesn’t have the luxury of being able to stand around and hone in on one particular possession. I think that’s key,” Michigan assistant coach Bacari Alexander said during media availability on Thursday. “I think the second part of things is, we have to force him to keep us off the offensive glass. One of the things that Mitch McGary brings to the table is his offensive rebounding prowess. So that’s going to be something they have to deal with.

“I think the last part of things is, you’ve got a guy in Trey Burke who is really clever, in the sense that when he comes off ball-screen action — now Withey has to make a decision: do I step out a little higher to take away pull-up jumpshots, which are a strength of ours, or do I stay back and play the lane and allow that shot. It’s going to be a game of chess, not checkers.”

So we see a three-pronged plan for the Wolverines to address Withey: make him move around a lot, most likely through high ball screens; force him to work on the glass by crashing the offensive boards; and allow Trey Burke to do what he’s been doing all season long — force opposing bigs to pick their poison.

Burke focused on the importance of reading Withey’s movement defensively.

“Just try to get as deep in the paint as possible. When we get down there, just making wise choices,” Burke explained. “My job is just to try to hit the layup when I can and hit the big man when I can. It’s all off of reads from Jeff Withey, really.”

Alexander mentioned the importance of McGary not picking up early fouls, something the young big man has struggled with in the past. Offensively, Michigan will also try to go at Withey off of secondary fast breaks, before the talented center is able to establish defensive position in the post.

McGary also hoped to get Kansas’ big man in foul trouble when he had the chance.

In preparing to face Kansas in the Sweet Sixteen, Michigan coaches noticed that the Jayhawks look similar to the Wolverines’ Big Ten foes earlier this season.

Kansas plays a bit faster than most Big Ten teams, but there are plenty of similarities. The Jayhawks are very experienced, boasting four seniors in their starting lineup. This is comparable to any number of Big Ten teams as the top four teams in the league other than Michigan started at least three upperclassmen.

“First of all, you have four seniors out there. They have seen it all. They’ve been to the Final Fours. Looking at Releford and Johnson … I just saw you two years ago, no, I saw you three years ago (when Michigan played Kansas in 2010),” John Beilein said on Thursday. “It’s really important they’ve had that continuity… That’s what makes them. They have continuity with young talented young players all the time. It takes time to learn this defense like they play it.  They really play it well.”

It’s primarily that tough defense, ranked fifth in the nation in adjusted efficiency, that reminds Michigan coaches of some of the teams they faced during the conference season. After going up against defenses like Wisconsin (2nd), Michigan State (6th), Ohio State (7th) and Indiana (13th), playing Kansas’s defense feels like coming home.

Michigan assistant LaVall Jordan emphasized the importance of manufacturing good offensive possessions — and when you get a good shot, you’d better make it.

“It’s similar to a Big Ten team like Wisconsin or Ohio State, where you’re going to have to work and earn good opportunities, and when you get them you’re going to have to make them,” Jordan said. “Getting them is a challenge, guys will have to be strong with the basketball, guys will have to get in the paint and create for teammates when those plays are in front of you.”

Transition game will be critical

So Michigan is dealing with a superb defense in Kansas and a dominant shot-blocker in Jeff Withey. What’s the best way for the Wolverines to nullify these strengths? The answer is the same as it’s been all season:

That’s been Beilein’s mantra all season and the key to Michigan’s effective but turnover-repellent fast-break attack: run when you get the opportunity, and don’t force things.

How does Michigan comes across said opportunities? The Wolverines will have to create them for themselves on the defensive end.

“The ability to get transition for us is going to be dependent upon our ability to contest shots, making sure we block out, things of that nature,” Bacari Alexander said. “Also, keeping them off the free throw line. Kansas does a phenomenal job of getting to the charity stripe, which is a game within a game that not many people are talking about, that we need to control.”