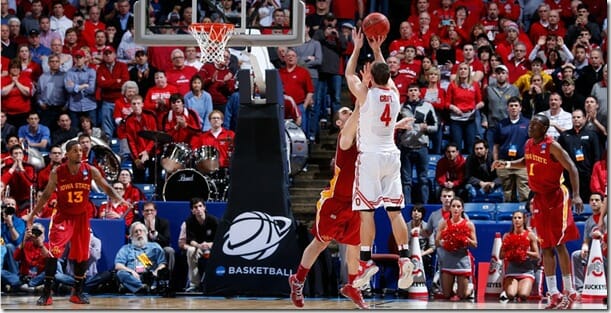 With the Big Ten accounting for a quarter of the teams making it to the Sweet Sixteen, it’s safe to say the best conference in the country has lived up to its billing thus far — no matter what Charles Barkley says. But it will be a tough road for each Big Ten team to reach the Elite Eight. Both Indiana and Ohio State were in dogfights in their previous games: the Buckeyes needed a last-second shot from Aaron Craft to make their way past a talented Iowa State team, and Indiana had to win ugly against Khalif Wyatt and Temple. The road to the Sweet Sixteen was less rocky for the pair of schools from the state of Michigan: the Wolverines took advantage of a decidedly favorable match-up against VCU and cruised to victory, and the same could be said of Michigan State, which blew out Memphis. After the jump find a look at each Big Ten team’s match-up in the regional semifinals.

There is a lot to digest when thinking about a match-up between these two storied programs, but boiled down, it will come down to whether or not Syracuse’s defense will be able to stop Indiana’s offense. The Orangemen rank in the top-10 nationally on defense and the Hoosiers are known for their offense, ranked the best in the country. Syracuse, like Indiana, is extremely athletic and has a ton of talent all over the floor: Brandon Triche is an experienced scorer and Michael Carter-Williams is one of the better point guards in the country. Then there’s Rakeem Christmas in the lane — the gifted sophomore shot-blocker claims a block percentage of over 11, which puts him in the top-20 in the country. That being said, Syracuse is not offensive juggernaut — the only one of the four factors where the Orangemen rank in the top-100 offensively is offensive rebounding percentage, and they are really good at that. Syracuse makes its living on second-chance buckets, collecting almost 40 percent of its missed shots. Indiana collects about 69 percent of its available defensive rebounds, which is thoroughly average. The Hoosiers have the athletes and the shooters to give Jim Boeheim’s vaunted 2-3 zone fits — Jordan Hulls, Christian Watford and Victor Oladipo all shoot over 40 percent from beyond the arc — and Oladipo on Carter-Williams is a decidedly favorable match-up for Indiana. The key could be Indiana’s ability to exploit the Syracuse zone. According to Synergy Sports, Indiana has the best zone offense in the Big Ten and averages 1.12 points per possession against zone defenses.

Key match-up: Cody Zeller vs. Rakeem Christmas While these two may not be explicitly matched up against each other the whole game; it will be up to Zeller to keep Christmas and the other Syracuse bigs off the offensive glass. This will obviously be a team effort, but protecting the paint will largely fall on Zeller’s shoulders. If he is able to somewhat neutralize Syracuse’s offensive rebounding, Indiana could win handily.

Arizona has to be entering this matchup feeling pretty confident. The Wildcats obliterated their first two opponents in the NCAA tournament, winning their first two games by an average of 20 points. That being said, they did play Harvard in their round of 32 game. The Buckeyes should be feeling mighty confident as well, having not suffered a loss since February 17th at Wisconsin. Deshaun Thomas has been his usual high-usage, high-efficiency self over the course of Ohio State’s first two games, scoring 50 total points on a combined 19 shots over that span. Two things about Arizona stand out: the Wildcats are a very good defensive rebounding team, collecting 73.5 percent of their misses; they are not good at defending the 3-point line, allowing opponents to shoot 35 percent from beyond the arc this season. However, they have made their living at the 3-point line so far in this NCAA tournament, hitting 56 percent of their threes in the first two rounds. Arizona boasts talented athletes at multiple positions, most notably Solomon Hill and Nick Johnson, which Ohio State counters with depth: with players like Sam Thompson, Lenzelle Smith Jr., Shannon Scott and LaQuinton Ross, the Buckeyes have the horses to wear down Arizona.

Key match-up: Aaron Craft vs. Mark Lyons Lyons, a senior transfer from Xavier, is Arizona’s highest-usage player. While the point guard has notched only two turnovers in each of the Wildcats’ past two games, his turnover rate of 20 percent on the season isn’t very good. If Aaron Craft, who many consider to be the best on-ball perimeter defender in the college game, can force Lyons into some early turnovers that lead to easy buckets, it’s going to be a long day for Arizona.

Two March giants collide in Indianapolis on Friday with Michigan State taking on Duke. It has been a steady, methodical march through the tournament for the Blue Devils so far, having dispatched Albany and then Creighton with relative ease. Michigan State hasn’t had any problems either, drubbing both Valparaiso and Memphis on its way to the Sweet Sixteen. For Duke, the story has been Ryan Kelly. Many considered the Blue Devils a number one seed with Kelly in the lineup, as Duke suffered all four of its regular-season losses with Kelly out with a right foot injury. Duke brings to the table a ruthlessly efficient offense, thanks largely to its long-range shooting: the Blue Devils are hitting 3-pointers at a 40 percent clip for the season. With shooters like Ryan Kelly, Seth Curry and Quinn Cook launching, that comes as no surprise. Michigan State brings a similarly ruthless defense, ranked sixth nationally. The Spartans hold opponents to a 3-point shooting percentage under 30, and if they do that against Duke they will likely advance to the Elite Eight. Offensively, Michigan State is seeing all sorts of production from Adreian Payne, who had 14 points and 10 rebounds against Memphis. Duke has seen its own offensive spark light up in the form of Rasheed Sulaimon, who went off for 21 points against Creighton.

Key match-up: Derrick Nix and Adreian Payne vs. not Mason Plumlee Michigan State’s twin towers pose an especially tough match-up for Duke, who simply doesn’t have the size underneath to neutralize them. Mason Plumlee is the only Duke big man who can match up with either of the Spartan forwards, and it’s likely Duke will throw a variety of defensive looks at Payne and Nix. If Nix gets rattled and throws the ball away, it means trouble for State. But if the Spartans can get the ball into the paint and see production, they will be able to exploit the most obvious mismatch between these two teams.

Michigan rolled past VCU on its way to the Sweet Sixteen in such a way that it has many analysts proclaiming Michigan as perhaps the best team left in the South region. However, it’s worth noting that the Rams provided Michigan with the absolute perfect match-up with their all-or-nothing style predicated on turning teams over. Michigan played very well against VCU, but Kansas will be an entirely different beast. The Jayhawks come into this game a tad shaky, having squeaked past Western Kentucky in their round of 64 match-up and then finding their footing somewhat against North Carolina. Kansas boasts one of the best defenses in the country, and the reason is simple: the Jayhawks protect the rim. And who is it, exactly, protecting that rim? His name is Jeff Withey and he is a shot blocking monster. His block percentage of just under 14% is good for fifth in the country. The other edge Kansas had over Michigan is experience: four of the Jayhawks’ five starters are seniors, and the one non-senior happens to be freshman phenom Ben McLemore. However, the Wolverines have the No. 2 offense in the country at their disposal with which to attack Kansas, and the emergence of Mitch McGary will be a huge factor in keeping Withey in check. If McGary can draw Withey out of the paint, through high ball screens or even some midrange shooting, it will open up the lane for Trey Burke, Nik Stauskas and Tim Hardaway Jr. to drive and finish.

Key match-up: Michigan’s perimeter players vs. Kansas defense 3-point shooting defense, that is. Kansas defends against the 2-point shot better than anyone in the country, holding opposing teams to a 38.7 2-point shooting percentage. Michigan hasn’t been knocking down its 3-pointers lately — with the notable exception of Tim Hardaway Jr. — but if they can somehow find their shooting stroke against Kansas, it will go a long way toward drawing the defense away from the basket and opening up other opportunities on offense.